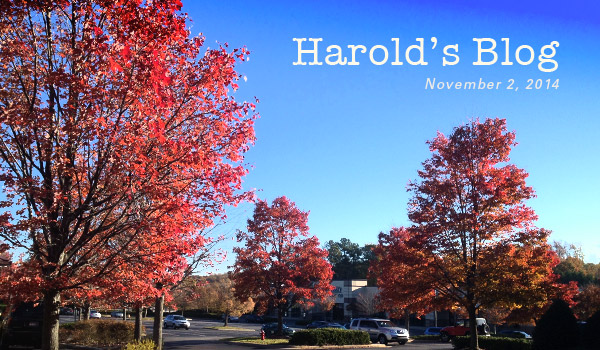 Cary, NC — This week was a busy week with long meetings for a mini-retreat and a council meeting.

Later in the day I joined Mayor Pro-Tem Adcock, management, directors, legal, public information, and administration to review the agenda. The agenda had 9 consent items, 9 public hearings, and 7 items for discussion. Since all public hearings had the potential for speakers and discussion I predicted the meeting would last until at least 11 PM.

Monday evening I met with the town manager for our one-on-one weekly meeting. Our discussion mostly focused on the winter retreat to be held in Charlotte and how we could cut costs. Having a retreat out of town is about the same cost as having one in town and provides much more benefit since staff and council are together for two whole days.

Tuesday the council held a mini-retreat to set priorities for the upcoming 2016 budget. There were four main topics: 1) Challenges for the future, 2) Capital Improvement Financing, 3) Review of Fund Balance Target, and 4) Near Term Possibilities. The retreat lasted for about 4 ½ hours.

Challenges for the future

The first topic at the mini-retreat was open to the council to list challenges they believed to be important for the future. Here are some of the items:

This session of the work session lasted an hour.

Our second topic in the mini retreat was Capital Improvement Financing. Basically this approach will change the way capital improvement projects will be presented in the Fiscal Year 2016 budget. It better aligns projects with available resources. Interesting points I noted in this session were:

This session completed after about 45 minutes.

The third topic of the mini retreat was on our General Fund Balance. The General Fund Balance is the town’s savings account and is divided into three parts. The first part is the state mandated 2 months (of operating costs) in reserves. This cannot be touched. The second part is the town policy of 4 months of reserves, and the third part was the reserves in excess of the state and town reserves.

Initially the town had a practice of keeping four months of reserves with an understanding that some of that could be used for pay-as-you-go capital projects. Over the years there was always money in excess of the town reserves and that was used for pay-as-you-go projects. As a result the town’s four months of reserves was never considered for capital projects. This can be problematic since interest savings is almost nothing and is clearly less than debt interest.

After much discussion the council decided to make the town reserves 3 months in addition to the 2 months state mandated giving us 5 months of reserves. In addition, this 5 months will be a hands off reserves. This is considerably more than other municipalities with the highest bond rating (like Cary) from agencies like Moody’s or Standard and Poor. The excess capital reserves will now be around $45 million. The council will continue to use its current policies and budgeting and reviewing any expenditure of capital reserves.

The last topic at the mini-retreat was basically an open floor for council members to express near term possibilities that they would like to focus on. Here are some of the items mentioned:

The town manager stated that he will summarize all issues from all mini retreat topics and report them back to council with a plan.

Thursday night was one of two regularly scheduled council meetings we have each month. The council held eight public hearings, approved the demolition of a burnt structure that has been in a dilapidated state for months, approved the Booth Amphitheater management plan, approved the regional branding for CTran which will be called Go Cary in the future, approved the leasing of street lights on Academy Street from Duke Energy, and directed staff to review the town’s noise ordinance exception for golf courses and come back to council with options. The meeting concluded about 9:45.

Saturday I had the privilege of attending the 56th Cary Band Day competition. All the bands were awesome but I was impressed with Panther Creek and so were the judges. Cary High School and NC State bands provided outstanding exhibitions. At the end of the evening I had the honor of handing out one of the awards.

Sunday I gave remarks at a meet and greet for Gale Adcock which was held in Carpenter Village. Gale will be a HUGE asset to the legislature and I look forward to celebrating her victory on Tuesday night.

Emails from staff included the 3rd quarter report. Notable items from the report include:

Read the report in its entirety.

This week I will be busy with a dinner at the Divan Center, a visit to Cary Christian school, a visit to ITT campus, the Citizen Police Academy graduation, and a Mayors Association outing at the RBC center.

Well, that is all for this week. My next post will be on Sunday, November 9th. Although I have Facebook and Twitter accounts those are not the best means of communications with me. Please send all Town of Cary questions or comments to Harold.Weinbrecht@townofcary.org and email personal comments to augustanat@mindspring.com.

Deer Vs. Auto: By the Numbers