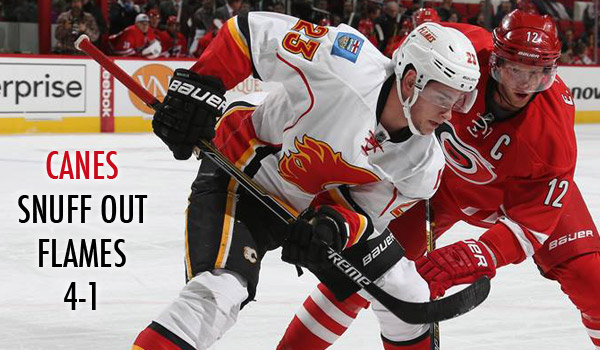 Raleigh, NC — Jeff Skinner celebrated his 100th NHL goal in a strong come from behind win for the Hurricanes against the Calgary Flames 4-1 on Nov. 10th at the PNC Arena.  The Canes have not lost in regulation in November with the only blemish being an overtime loss to the Washington Capitals this past Saturday.

The game was tight checking by both teams through the first half of the first period with only 5 shots combined for the first 12 minutes. Cam Ward was back in net and was sharp from the onset as he made several key saves and had excellent rebound control.

At the 12-minute mark, Alex Semin was called for a tripping penalty and the Flames wasted no time in converting the powerplay into a quick 1-0 lead.  Dave Jones managed to settle unnoticed in the sweet spot just in front of the crease and easily put a pass from Curtis Glencross past Ward.

Late in the period, Justin Faulk passed to Zach Boychuk in the neutral zone who carried the puck into the Flames end with a defenseman draped all over him.  Boychuk was first just trying to kill time for a line change but his scoring instinct kicked in and broke free for a nanosecond then flung the puck to the goal. In one of the few breaks that went the Canes way this season, the puck ricochet off the goalie’s mask into the net to tie the game at 1.

Riley Nash was again impressive on the first faceoff of the Canes first powerplay.  Nash won the faceoff then passed back to Faulk on the point.  Faulk took a few strides to the net then muscled a slap shot under the arm stick side of Jonas Hiller for a 2-1 Cane lead and the Canes never looked back.

Semin may not have had a goal that has counted yet, but since being a healthy scratch, his offensive play has improved.  What Semin does off the puck along with his ability to hold onto the puck is very impressive. Like Boychuk in the first, Semin had the puck all alone in the Flames end waiting for some other players wearing red.

Jay McClement was first to enter the zone, makes a run to the net and camps out in front of the crease. Semin was zigging and zagging with Skinner next in the zone. Semin delivers a soft backhander over a defender’s stick that Skinner one times a wrister on the fly past Hiller on the far side of the goal. McClement does not get on the scoreboard but his play out front was as important as an assist.  The Caniacs gave a well appreciated ovation to Skinner on his 100th NHL goal.

Midway in the third, the Canes had the puck deep in the Flames. Skinner forechecked the hottest defenseman in the NHL, Mark Giordano behind the goal.  The puck went around the boards and bounced off a Flame player inside the blue line, bouncing back to the far corner right to Skinner.  Skinner calmly looked up and saw Tim Gleason cutting in, made a perfect pass that Gleason knocked in for his first goal in well over a year.  Who would have thought that Tim Gleason would have more goals than Semin at any point in the season?

The game was another total team effort and Bill Peters has the Canes hitting on all cylinders now.  Next home game is this Thursday against former coach Paul Maurice and the hot Winnipeg Jets.  Great seats are still available.