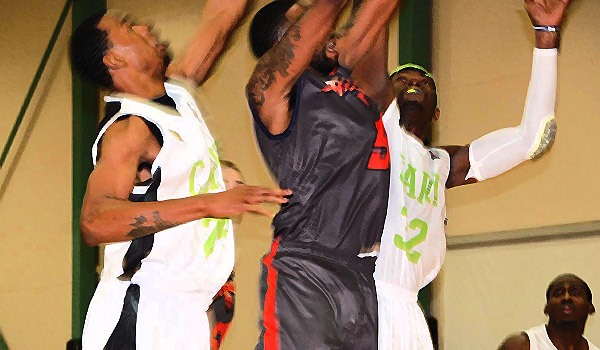 Cary, NC — In the second game of the Tobacco Road Basketball League (TRBL) season, the Cary Invasion faced off at home against the Raleigh Revolt, a team with several Ex-Invasion players on their roster.

On paper, the game looked to be every bit as good as it was. Raleigh Revolt, a team made up of three former Invasion players and five former TRBL All Stars, suited up to play against the league powerhouse Cary Invasion, a team that has lost only twice in Cary in its last five seasons.

Through a whistle-heavy three quarters, neither team could muster a lead of more than a couple of baskets. Cary utilized dribble penetration from its lightning-fast back court to score its points. The Revolt put its strong post and swing players to work to keep pace.

Former Invasion player and Shaw University standout Daniel Jackson had a monster game, leading all scorers with 30 points and 15 rebounds for the Revolt. But the effort still came up short.

The pivotal point in the game occurred late in the fourth quarter. Leading 95-90 with the ball with just four minutes left, the Revolt looked like they were on their way to closing out the game.

Another former Invasion player and TRBL All Star, Freddie Little, barely missed an open three-point shot that would have put the Revolt up by 8 points. Instead, the Invasion grabbed the rebound and went the length of the court for a quick score.

A few quick turnovers by the Revolt put Cary in the driver’s seat. The home team went on a 14-4 run to close out the game, capped off by an intentional foul in the closing seconds of the game. Cary won 104-99. Guard Paul Wright (Mountain State) led the Invasion with 20 points.