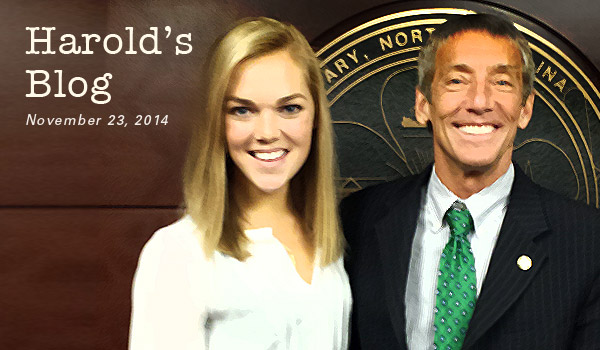 Cary, NC — This was a busy week, as we tried to do as much as possible before the holiday.

Monday started with calls to council members to hear their questions or concerns about the agenda for Thursday’s regularly scheduled council meeting. I was only able to contact council members Yerha and Bush. Our discussion focused on appointments to the Wake County Transit Investment Strategy Study Advisory Committee and a couple of rezonings.

Later Monday I met with staff and Mayor Pro-Tem Adcock to go over the agenda. Since there were only two public hearings and no closed session I predicted that our meeting would conclude by 9:30.

Monday night I met with the Mayors Association in Fuquay. Our main topic of discussion was the legislature and the actions they are planning to take. Some mayors disclosed information from inside sources that the assault on municipal revenues would continue.

In addition, it was also disclosed that the state might move maintenance of all roads within municipalities to the towns and cities. In Cary that would mean about 200 miles of state roads would become our responsibility. That would be a HUGE cost. To put it in perspective, one lane mile of road is about a million dollars which is about a penny on our tax rate (34 cents per $100).

We all agreed that at this point we need to develop better relationships with our Wake County delegation before the session and before we are asking for anything.

Tuesday I joined council member Bush in the taping of the December episode of Cary Matters. Our main segment explained zoning in detail. The Q&A addressed police body armor and discounted taxes for seniors.

The first topic was to review Legislature Advocacy Conference Goals from the NC League of Municipalities. We took 41 goals, selected the top 25, and categorized them into High, Medium, and Low priorities. That process took about 15 to 20 minutes.

The second topic was somewhat related as we reviewed last year’s Cary legislative agenda and provided comments for this year’s legislative agenda. We will vote on that agenda at a later date. This portion of the work session took about 40 minutes.

Appointing a Replacement for Mayor Adcock: Pros and Cons

Comments related to not appointing included the point that council member Yerha lives in district D, council rarely has 4 to 3 votes on critical issues, and that it takes months to get up to speed and comfortable serving as a council member regardless of experience.

The council decided not to make a final decision since council member Frantz was absent recovering from surgery. However, it did appear that the majority of council members were leaning not to appoint a replacement. We will take up the subject again at the December 9th work session.

Wednesday was a very busy day for me which required me to take vacation time from work. Taking vacation for town functions is nothing unusual and I usually use about 2 of my vacation weeks a year for this purpose.

Wednesday afternoon I had the honor of giving remarks at the dedication of the Western Wake Regional Water Reclamation Facility. It took about 10 years and $300 million dollars to get this facility built, and it will serve our citizens and our region for about 20 to 25 years.

This project was on time and under budget. Partners in the building of this facility included Wake and Chatham County, the Towns of Apex and Morrisville, the New Hill community, a laundry list of state and federal agencies, and private contractors.

The Western Wake Regional Wastewater Management Facilities is an excellent example of how all the levels of our government can accomplish great things when we have a shared vision and commitment to our community and our county’s future. The ceremony lasted about 20 minutes and was followed by a reception.

After the dedication I hurried to downtown Raleigh to attend the Capital Area Metropolitan Planning Organization meeting. We only had a few items on the agenda and none of them were critical decision items.

Back to Town Hall

Next it was back to Cary Town Hall. I sat in and listened to the Aging issues Task Force. The purpose of the group is to assess the Town’s level of age-friendliness by reviewing the Triangle J Council of Government’s Livability Toolkit and providing recommendations to Town Council to support an aging population.

Next I met with UNC Chapel Hill reporting student Madison Gardner. She was doing a final report on how Cary is still a town even though it is larger in size than some North Carolina cities and how Cary works to keep an intimate, small town atmosphere even though it is continuing to grow and flourish. Her interview lasted about 30 minutes. As a side note, Madison is a cheerleader at UNC.

Thursday evening I attended a reception and gave remarks at the annual Hometown Spirit Award. There were three fantastic nominees this year.

The first nominee, Steve Linton, served his community by helping with recovering alcoholics, Jobs for Life with Dorcas ministries, and starting a company to assist women getting back on their feet.

The second nominee was Barbara Magee who has been teaching at Green Hope High School ten years. She promoted community service, as a requirement of your curriculum, in order to foster a sense of stewardship in students and build pride and investment in our town.

Her students have logged over 42,000 of service by doing things like maintaining trails at Hemlock Bluffs, removing litter from our streets and streams, helping the Town with compost education and outreach goals, supporting the Town’s green events and celebrations such as Reuse Rodeo, Arbor Day, and Earth Day.

The third nominee was David Martin who coined the phrase “The only place you can go that is better than Cary is heaven.” In addition to being a successful businessman, Mr. Martin has been a strong advocate for our town and helps preserve our neighbor-helping-neighbor community.

Some examples of his kindness include helping a widow repair a leaking roof, giving emergency housing to a family in financial stress; incubating beginning churches with free meeting space are just a few examples of the many acts of kindness and generosity.

Thursday night the council held the only regularly scheduled (non quasi-judicial) meeting of the month. At the beginning of the meeting I was joined by 2013 Hometown Spirit Award winner Jerry Miller. He announced this year’s winner, David Martin, and we congratulated him and presented him the award. We are blessed to have so many great people serving and helping to keep our small town feel.

The remainder of the meeting included three major rezonings west of Highway 55 which were tabled after applicants pre-meeting talks with various council members and after applicants heard our discussion about issues related to growth in western Cary. Council members expressed desire to approve low density single family residential in western Cary but with no relief school overcrowding coming in the near future and major traffic issues they couldn’t approve these requests.

Other items at our meeting included two public hearings, the Wake County Transit Investment Strategy Study Advisory Committee Appointments, and a request to investigating potential risks supporting a resolution recommending the approval of tax-exempt bonds for the financing of Triangle Math and Science Academy. Our meeting concluded after about an hour and a half.

Friday I had the pleasure of welcoming everyone to the 4th Annual Waverly Place Christmas Tree lighting ceremony. After my remarks I introduced Santa and he lit the tree with his magic after a count down. There was a good crowd on hand and great entertainment. What a great way to start the holiday season.

Emails from citizens this week included a concern about rezonings in west Cary and a concern about homes being built in Fryars Gate. I also received a lot of invitations, dinners, and performances. While I would like to do them all there just aren’t enough free slots on the calendar. But I do look forward to those I can attend.

Next week is the Thanksgiving holiday week and will be very slow for me. It only includes a couple of meetings. I am looking forward to spending time with family and friends and enjoying some down time. My wish to all of you is that you have a Happy Thanksgiving!

Well, that is all for this week. My next post will be on Sunday, November 30th. Although I have Facebook and Twitter accounts those are not the best means of communications with me. Please send all Town of Cary questions or comments to Harold.Weinbrecht@townofcary.org and email personal comments to augustanat@mindspring.com.

From the blog of Cary Mayor Harold Weinbrecht.  Photo courtesy of Mayor Weinbrecht.