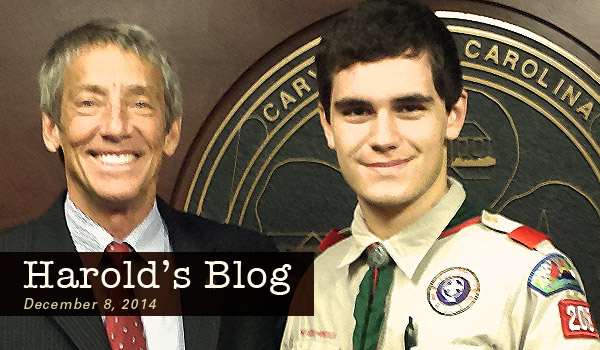 Cary, NC — This week consisted of meetings, holiday events, and the groundbreaking of Fire Station #2 on Chatham Street.

Monday I met with the town manager to go over about a dozen issues. Our discussion included a potential meeting of the Cary Town Council and the Wake County Commissioners, issues related to the new Wake County library to be built across from the Cary Arts Center, a potential public-private partnership on turf fields, and a development proposal downtown. Our meeting lasted about 45 minutes.

Tuesday I joined council members Smith, Frantz, and Yerha to break ground for the new fire station #2 on Chatham Street. I joined the town manager and fire chief in making remarks. Here is an excerpt from my remarks:

It’s my pleasure to welcome you to downtown Cary and to the site of what will be our newest fire station. Based on results from our 2014 Biennial Survey, we know Cary citizens are passionate about safety. In fact, 97% of citizens responded that they feel safe or extremely safe in Cary.

And when it comes to our Fire Department, citizens gave it the highest marks of any department, awarding our firefighters with an overall A+ for all service areas including: competence, courteous, fairness, problem solving, and response time. This is a result of the tireless efforts by our fire personnel who will soon have this new station to call home. Let’s give a round of applause for our men and women in red, the folks who see us at our worst and help us get back to our best.

Of course we wouldn’t be here without support from our citizens. In 2012, Cary voters overwhelmingly supported the Fire Station Bonds Referendum. With its passing, we’re able to move forward and give our heroes in red an adequate home away from home and to help meet or exceed response time’s goals. Thank you for investing in Cary. Our community is undoubtedly better for it.

The remarks were followed by the traditional turning of the dirt photo op and then a reception. I look forward to the ribbon cutting next year.

Wednesday I was interviewed by Sam Penry who was working on a merit badge. His interview lasted about 30 minutes and most of our conversation centered on growth in western Cary. We had a good time and I hope to attend his Eagle Scout ceremony in the future.

Saturday night I, along with council members Yerha and Frantz, had the honor and privilege to attend Cary’s 27th Christmas Tree Lighting ceremony. Due to the rain the event was held in the council chambers. Two to three hundred people were treated to phenomenal entertainment for about an hour.

Next we all headed outside where our honorary tree lighters, Beth and Anthony Blackmon, threw the switch after a countdown by the crowd. It was a great time and everyone seemed to have enjoyed it.

In emails this week staff sent out a summary of development and construction activity for November. Here are some of the interesting points:

Projects approved in November include:

Next week will be one of the busiest weeks, if not the busiest week, since I have been mayor. It will include a quasi-judicial hearing, a work session, a long council meeting, several speaking events, and other events and meetings.

Well, that is all for this week. My next post will be on Sunday, December 14th. Although I have Facebook and Twitter accounts those are not the best means of communications with me. Please send all Town of Cary questions or comments to Harold.Weinbrecht@townofcary.org and email personal comments to augustanat@mindspring.com.

From the blog of Cary Mayor Harold Weinbrecht. Photo with Sam Penry courtesy of Mayor Weinbrecht.

Photos from Cary’s Heart of The Holidays 2014