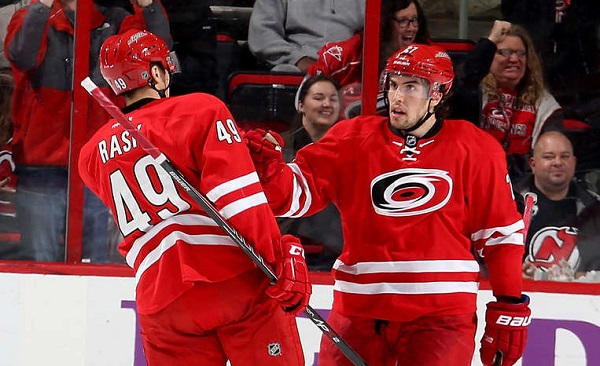 Raleigh, NC — The Carolina Hurricanes didn’t enjoy their home cooking as much as they wanted or needed to, as they lost two more games to the Red Wings and the Devils for an overall record of 1-4 in the last five games at the PNC Arena.

The Canes lost to the Detroit Red Wings 3-1 on Sunday, December 7, 2014 in what was billed as a ‘weird’ game for Coach Bill Peters. This was the first time that Peters was going against his old team. Newcomer Andrej Nestrasil was picked up off waivers from Detroit, and he also wanted a better result for personal reasons.

Make no mistake, The Wings’ top line of Pavel Datsyuk, Tomas Tatar and Darren Helm was the best line the Canes have faced this season. Watching them alone was worth the price of admission. They do more off the puck than most players do with a puck while causing havoc for the defense. 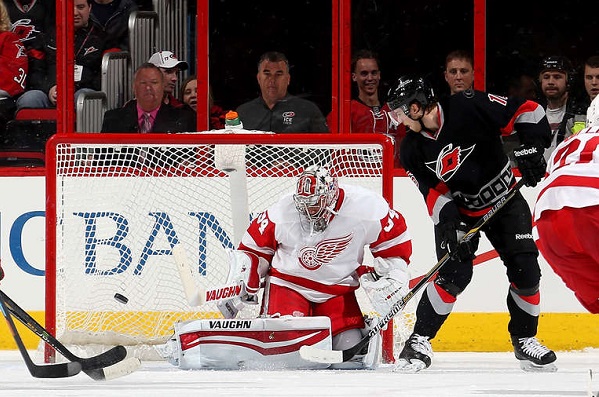 Elias Lindholm of the Canes creates traffic as Petr Mrazek of the Wings deflects the puck wide of the net.

Canes Get a Lesson on Skill and Speed

As much as I favor a player being big, Helms is the tallest and is generously listed as six feet. True to form, that line accounted for all three Wings’ goals. The Wings scored two goals late in the first and had the three goal lead about midway in the second. None of the goals could be hung on Cam Ward, as he continues his solid play.

One goal was off Andrej Sekera’s skate about 4’ in front of the net, and the other two were skilled shots through traffic in from of the crease. The Canes’ Jay McClement got his first as a Cane late in the second on a tip in off a blast from Tim Gleason from inside the center blue line.

The Canes did have 35 shots on goal, but very few would be considered scoring threats. Never in the 100+ year history of hockey has a goal been scored going through a team logo on the goalie’s sweater.

Canes Have a “Devil” of a Time

The Canes lost the opportunity to end the home stand on a winning note as they lost another one goal game 2-1 against the New Jersey Devils the following night on Monday, December 8, 2014. 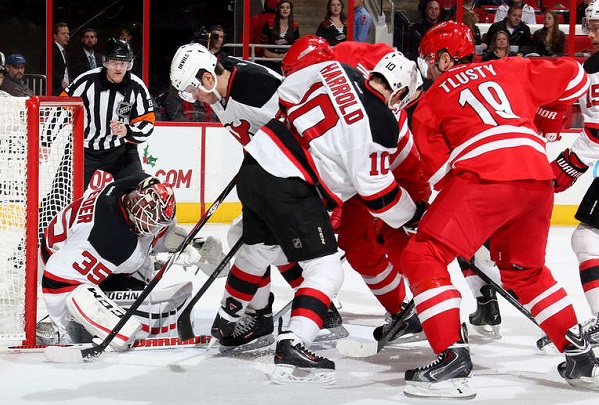 Cory Schneider of the Devils makes a save through traffic in front of the net.

The Canes had an early power play that looked promising. Passing was crisp, players were moving and causing traffic in front of Cory Schneider, and they got off several decent shots. Unfortunately, looks aren’t everything, and the Canes really could have had a boost in their morale with a goal.

All of the Canes joined in trying to make it a light night for Ward as the Devils only had two shots through most of the first.  Justin Faulk broke the ice with a strong wrister and heavy traffic in front of the crease. The nice thing about that goal was that it was after a face-off in the Devils’ end due to an icing, and all five Canes skaters were involved in the play.

Canes Score in a Span of 15 Seconds

Victor Rask won the face-off and Juri Tlusty moved the puck up to Ron Hainsey who passed along the blue line to Faulk. Faulk passed off the back boards, back to Rask, and over to Hainsey. Then, Nestrasil laid a sweet backhander to Faulk in the high slot who sent it in for a 1-0 Cane lead all in a span of 15 seconds–proving that speed and skill wins most of the time.

Jamior Jagr, playing in his 1500th NHL game, scored on a nice feed from Scott Gomez after the Canes failed to clear the puck. Late in the period, the Canes had an opportunity to get back in the game with the man advantage. The start of the power play looked good, but a poor line change resulted in a “Too Many Men” penalty that ultimately proved to be a game killer as the Devils scored of the back-end power play.

The Canes had another power play with no goal early in the third when former Cane Tuomo Ruutu got called for boarding. The Canes, again, had plenty of shots–40 in total with several good opportunities. The Devils only had one shot in the third, which was both the Canes putting on pressure and their turtle defense.

As Cary resident, author and historian John Hudson Emerson says, “With all that talent, they have to score more goals.” How true!

Garden: Holiday Plants for Your Home
Scroll to top