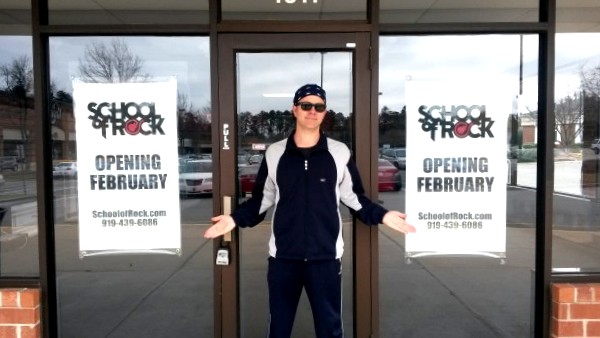 Cary, NC — Cary is getting just a little bit hipper. In mid-February 2015, Kevan Hester will open a School of Rock franchise in the long-empty former home of Wolf Camera in the Maynard Crossing Plaza on High House Road.

The performance-based music education franchise will begin taking students as soon as February 15, 2015 if all goes according to plan.

CaryCitizen asked Kevan how he came to open a music franchise in Cary. Kevan, who is originally from Texas, spent the last 15 years in South Korea. There, he met his wife and started his family. They recently decided to come to the states and chose the Cary-Apex area as an excellent place to live and to start a business.

Kevan said he came across the school franchise when he was searching for music education for his son. He wanted to share his passion for music and started looking for lessons. He found the Rock & Roll High School, but they were all booked up. At the same time, he was looking to start a business, and he wanted to pursue something educational.

Kevan liked the School of Rock business model, which is an international business with over 140 outlets across the U.S. and abroad. He would use a standardized teaching model and have a lot of experience to draw from. Over the summer, he attended the franchise’s “Battle of the Bands” in Milwaukee. The competition attracts student bands from across the U.S.

He left thinking, “This is what I want my kids to do!”

One of the aspects of the lessons that struck home with Kevan was that, “Unlike other music schools and theories of music education, School of Rock’s concept gets kids and adults rocking out to the classics and on stage performing with their peers quickly.”

He also explained that:

In addition to individual private music instruction on guitar, bass, vocals, keyboards and/or drums, students also learn how to jam with their peers in a weekly practice session. The team dynamic creates a supportive and motivating environment where kids feel inspired to excel while playing music that is more in tune with their personal tastes.

All School of Rock programs are performance-based and emphasize the message that music is not just about playing an instrument; rather, it’s about teamwork, building confidence, and creating leaders.

Each of the four main programs are designed for a particular age and skill level.

The Lessons Plus gives kids 45 minute lessons four times per month. These students have access to the shows but are not yet ready to perform. The next step is Rookies, where beginner students get to try out a variety of instruments.

Once students are comfortable with a particular instrument, they move up to Rock 101 to learn more advanced techniques and songs. The more advanced students move on to the Performance Program, where they rehearse three hours a week for a variety of shows and perform in front of live audiences several times a year.

In addition to lessons, School of Rock Cary will offer camps–including seasonal and track-out. These five day intensive camps are guaranteed to transform a “wanna-be” into a true rock performer. Through School of Rock’s “Guest Performer Series,” students have the opportunity to learn from and jam with some of music’s most iconic names.

The school will offer free trial lessons for students to get a taste before committing.