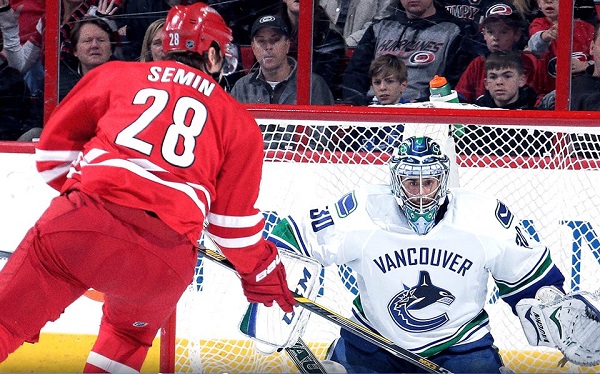 Raleigh, NC — The Carolina Hurricanes had their four-game home win streak broken by the Vancouver Canucks 3-0 on Friday, January 16, 2015 at the PNC Arena.

It was a combination of too many things not bouncing the Canes way–too many missed passes, too many Canes who weren’t hustling enough and weren’t checking enough, and too many bouncing pucks. Whatever the ice conditions were, it really did appear that the puck was bouncing a lot more than normal.

The Canes paid for a couple of those bounces that they couldn’t handle.

A Good Start Against the Canucks

The Canes came out strong in the first and sent plenty of rubber at Ryan Miller, but Miller had his usual solid performance. Vancouver’s defense isn’t the strongest in the NHL but, this year, with Miller, they have their best shot at making the Cup finals in years.

Miller actually did a rare feat of back-to-back shout out, as he also blanked the Flyers on Thursday night. Early in the game, the Canucks were trying to clear the puck, and Jeff Skinner’s amazing hand-eye coordination tipped the clearing pass out of the air right to Alex Semin.

Semin got the puck and had nothing between him and Miller but 12’ of clear ice. He got a handle on the puck but flubbed the shot, which has to be a mental thing. He’s too talented of a player not to bury a gift like that.

The Canes kept the pressure on, as they dominated the first 12 shots to only four for Vancouver. Cam Ward wasn’t challenged all that hard, as both his positioning and the defense, especially Ron Hainsey, were playing well.

The second period was another one to forget, as it brought back too many memories of October and of the last three seasons. There were errors all over by everyone–including the ice. One bright spot was early in the period, though–Semin brought the puck in the Canucks’ end with Andrej Nestrasil joining the rush on the left wing.

Semin has one of the most accurate sticks in the NHL, but Miller left no option but to pass. With the defense collapsing to the center, Semin made an unbelievable behind-the-back pass right to Nestrasil on the right side of the net. Miller slid over, stacked the pads, and made the save of the game to keep the Canes off the scoreboard.

It was all downhill for the Canes from then on. Less than a minute later, the puck was sent 40’ up ice with both Justin Faulk and Andrej Sekera solid at the Canes’ blue line. Derek Dorsett had speed going in the Canes’ zone and timed in perfectly as the puck bounced over Faulk’s stick. This allowed Dorsett to go in all alone on Ward, sending the puck high glove side. 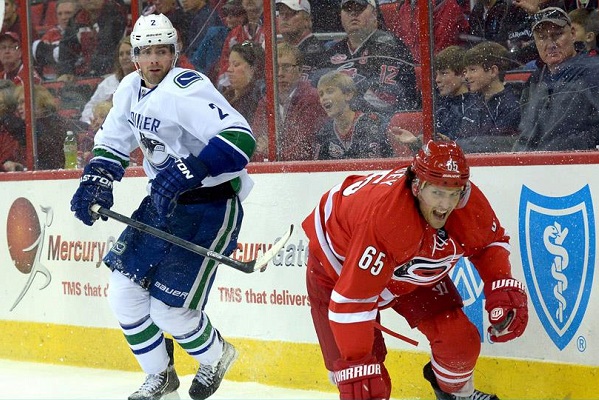 It was almost déjà vu on the second goal. The Canucks cleared the puck after a face-off in their own end. Shawn Matthias touched a bouncing puck as Faulk was reaching for it, got it over Faulk’s stick, and went in for the second breakaway on Ward for a 2-0 lead.

Late in the period, after a nice 60’ pass to Alexandre Burrows as he was crossing the blue line, he took a 40’ shot that went in just under Ward’s glove.

Anton Khudobin replaced Ward for the third and played very well, despite facing only four shots. Vancouver played turtle offense, meaning that he really concentrated on defense with an occasional offensive appearance. The Canes’ penalty kill (PK) team is still one of the bright spots, as they continued their perfect streak now at 30 for 30 without allowing a goal.

Having speed up front: Nathan Gerber, Pay Dwyer, Riley Nash and Jay McClement have been key to that success. One other thing that was very noticeable was the number of team scouts at the game–with one even filming the game. The Canes travel to Ottawa Saturday–which is good in that they’ll have to quickly forget Friday’s game.

The next home game is Tuesday, January 27, 2015 against Tampa Bay. Great seats are still available.