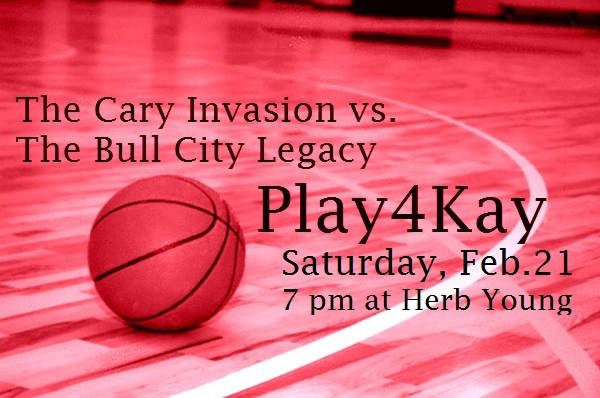 Cary, NC — On Saturday, February 21, 2015 at 7 pm, the Cary Invasion and Durham’s Bull City Legacy professional basketball teams will “Play4Kay” in a ‘no holds barred’ game at Cary’s Herb Young Center in their support of the Kay Yow Cancer Fund.

The Two Best Teams in the TRBL

Plans call for it to be a regulation pro ball game between two of the Tobacco Road Basketball League’s best and biggest rivals but, this time, they’re uniting in a benefit game appropriately named “Play4Kay” (the Invasion play their home games on a Kay Yow Court) which they hope will raise awareness and help the fund reach its financial goals.

We’re going to have an extended halftime incorporating a number of activities. First up will be the always popular Cary Invasion Dancers, followed by the jazz-inspired GenetiX Dance Group out of Raleigh. Then, slowing things down some, Ms. Christin Cox will perform a special presentation in recognition of sponsors, supporters and survivors. And, to close it all out, Cary’s own national champion, SuperSkippers, will be ‘jumping for Kay’ and ‘Wowing!’ fans with their amazing athleticism. It should be a great show.

Additionally, the Kay Yow Cancer Fund will have a display in the Center’s lobby before and throughout the game to talk with fans about their important work in the fight to eradicate cancer.

Cancer is one of those diseases that touches everyone. The Bull City Legacy and the Cary Invasion are grateful to be a part of this fight and hope everyone will come out and join us—dressed in pink, of course–in a community-wide demonstration of support.

The first Hoops4Hope game (2006) has evolved into what is now the Play4Kay® campaign, a national initiative that invites middle schools, high schools, colleges and community groups from across the nation to dedicate at least one sporting event to raise awareness and funds for the Kay Yow Cancer Fund.

The initiative began with the women’s basketball community and now coaches and players across any sport–football, volleyball, softball, soccer, men’s basketball, lacrosse, equestrian, etc. are all “Playing4Kay.” Coach Yow strongly believed that coaches and student-athletes have an opportunity to share not only a community but a cause much larger than the game.

Coach Yow’s legacy extends far beyond the basketball court. She founded the Kay Yow Cancer Fund in 2007 before passing away in 2009 after a 22 year battle with breast cancer. Coach Yow felt as if coaches and student-athletes not only shared a profession, but a community as well.

It is with this communal mentality that Coach Yow provided a platform to rally a nation of coaches, players, officials and fans to be a part of one team against one opponent–cancer. Her vision for the Fund encompasses not only her wish to fund women’s cancer research but also her desire for individuals to enrich their lives and those of others around us.