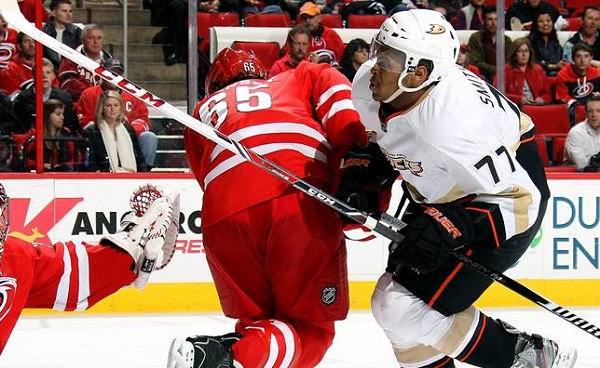 Raleigh, NC — After returning home from a very successful Western trip, while the circus borrowed the PNC Arena, the Carolina Hurricanes came up with a tough loss against the Anaheim Ducks 2-1 on Thursday, February 12, 2015. The Ducks beat the Canes in overtime for their only blemish against the three game western swing.

Canes Come Out On Fire

The Canes started off the game with renewed confidence and out-play, out-shot, out-manned, and out-skated the Ducks. The only thing they couldn’t do was out-maneuver goalie John Gibson. The first period was almost a mirror image of the game against the Ducks nine days earlier, as it was the Canes, this time, that dominated every category.

Not only did the Canes have a lopsided 14-5 shot advantage, but many were excellent scoring chances. Rookie Victor Rask had five shots alone in the first period and did everything right but score. His line, along with Jeff Skinner and Elias Lindholm, all had an impressive period shooting, fore-checking, and even banging bodies against the boards.

The top line of Eric Staal, Jordan Staal, and Jiri Tlusty had the closest call, as Tlusty sent a shot off the pipes after tic tac toe passing between all three forwards. Cam Ward, again, was solid in the net with the defense doing an excellent job of tying up with serious threat.

The Canes continued their dominance into the second with the Young Guns line using their speed and skill and providing havoc for Gibson and great excitement for the Caniacs. Slightly over midway in the period, the Canes had their first powerplay and moved the puck very well.

Alex Semin, while maybe in the coach’s doghouse, has Velcro magic on his stick with the puck and is one of the best passers in the league. Semin passed up to John Michael Liles who fed Skins in the face-off circle to the left of Gibson. Skins settled the puck, chose his target, and then sent a wicked wrist shot off Gibson’s right shoulder that bounced up then behind the goalie’s back into the net for a 1-0 Canes’ lead.

Later in the period, after Ward made a save on Corey Perry, Perry dragged Ward out of the crease. The defense didn’t clear the puck and gave the Ducks credit as they charged the net with the puck bouncing in the unattended net for a back-breaker of a goal. 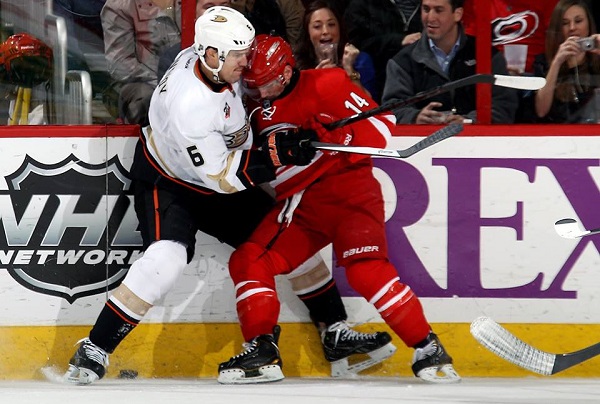 Just about three minutes later, after Ward made another save, Rask made a gutsy move to carry the puck across the crease. Again, the Ducks saw an opportunity and charged the net again with Matt Beleskey making a simple poke check that sent the puck in for a 2-1 Duck lead but, more evidently, the wind out of the Canes’ sail.

The turning point of the game may have been the heavyweight, about a minute before the Ducks’ first goal, when Tim Jackman challenged Tim Gleason behind the play. Clearly, its intention was to jump start the Ducks, and it apparently worked.

The third period was tough on the Caniacs. The skating wasn’t as fast, the checking wasn’t as tight, and the shots weren’t as frequent or threatening. One of the knowledgeable Caniacs pointed out that, except for Justin Faulk and Andrej Sekera, it was rare to see a slap shot bomb from the point.

Of the few shots that occurred from the defense, most were wristers and were going wide. Some shots are purposely sent off the near back boards, which are technically passes, but that wasn’t happening. The tide turned, and the Canes were being out-manned by the #2 team in the NHL.

It almost felt like two games in one with the first very exciting from the home team standpoint and the second reminiscent of games in December with a 2-1 loss. There could be some personnel changes for the Canes before too long, as the trade deadline is in two weeks.

Several Canes are being mentioned as trade bait but, the good thing is, everyone is not letting rumors affect their play.

The Canes have several Friday home games over the next few weeks with great seats still available. The next two are on Tuesday, February 17, 2015 and on Friday, February 20, 2015 at the PNC Arena.

How To: Plan for Your Wedding
Scroll to top