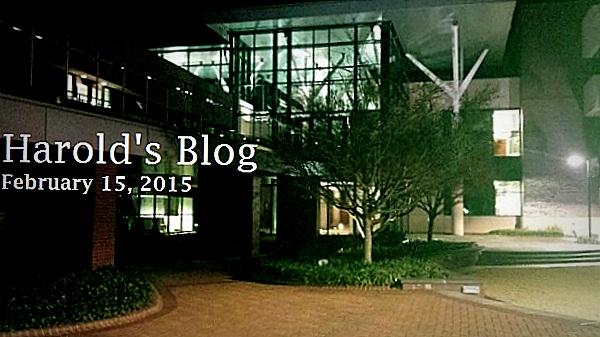 Cary, NC — This was a typical week that included meetings, presentations, and a council meeting.

As I always do in weeks with regularly scheduled council meetings, I called all council members to listen to their concerns and questions about the upcoming council meeting. Then, later in the day, I met with management, legal, public information, and others to go over the agenda. Based on the comments and emails, I believed plan amendments and rezoning proposals would be the focus of much of the discussion during the council meeting.

After the agenda meeting I met with the town manager, deputy town manager, assistant town managers, and Mayor Pro-Tem Smith to talk about upcoming items of concern. One item we talked about was the Google installation. It appears Google will start installation in Cary and Morrisville first. This will have an impact on Cary finances, since we will have to have staff to address issues and to inspect over one hundred contractors all working at once.

It is estimated that our cost might approach one million over three years.

Tuesday started with a presentation to me by The A.D. King Foundation from Naomi King, sister-in-law to Dr. Martin Luther King, Jr. Afterwards, I talked with the board member making the presentation about how we can grow and create similar events such as Dreamfest, the MLK event held in Cary each year.

Tuesday night I had the honor and privilege to hand out Lazy Daze grant checks to organizations involved in Cary cultural arts. Lazy Daze raised $35,000 this year for this cause and has raised over $565,000 since its inception. Thanks to all the organizations that work so hard to make Cary a better place.

Currently, there are about 500 companies in the State of North Carolina participating in apprenticeships. The Buhler Aeroglide apprenticeship program takes high school students and puts them through a four year program in addition to school. At the end of the apprenticeship program, individuals will have graduated high school, obtained an associate’s degree from Wake Tech, learned several skills such as welding, and will be offered a job. According to the Buhler Aeroglide officials their investment per apprentice is about $150,000.

This was my first meeting with a member of the President’s cabinet, and it was an honor to meet and talk with the US Secretary of Labor. Secretary Perez arrived about 30 minutes late in a two car entourage with what appeared to be three secret service men (but they could have been staff for all I know).

At our initial greeting, the Secretary knew who I was, and that I worked in the IT field. So it appeared he was briefed on everyone he was to meet.

I would have loved to see the briefing on me.

Next we toured the facility. Most of his conversation during the tour was with the President of the Company and the NC Secretary of Commerce, as it should be. However, Secretary Perez was very good in stopping along the way to talk with workers who were not expecting it. Those were great conversations and he was very skilled in getting them to talk.

He also made time to talk with me about getting apprenticeships in the IT field. My impression was that he was a very kind and very sincere individual who is excellent at what he does. I also had an opportunity to meet briefly with the new NC Secretary of Commerce who started his position in January. He congratulated me on MetLife and said he is looking forward to some other things that are in the pipeline. Me too!

Wednesday evening I met with the executive director of the Triangle Land Conservancy, or TLC. Over the last 30 years, TLC has conserved over 16,000 acres and owned and managed six nature preserves. Their mission is to safeguard clean water, protect natural habitats, support farms and food, and connect people with nature.

In our discussion, we talked about all that Cary is doing and how we could work together along with developers to create something special in Cary. We acknowledged that opportunities to preserve land are becoming more and more limited and that our future successes might depend on working with specific developers interested in creating open space with their projects. I am sure we will talk again in the future. Our meeting lasted about 45 minutes.

Council unanimously supported the sale of revenue bonds that could save the town $1.8 million with refinancing existing revenue bonds, and council unanimously agreed to approve a comprehensive land amendment on High House next to the Bradford development to allow low density single family housing instead of higher density.

In another decision, the council passed an agreement with CASL for soccer fields which will include two artificial turf fields. This agreement will provide more field time for non CASL players in addition to CASL players. The discussion item on the Carpenter Neighborhood Park and associated items was unanimously approved by council.

This agreement will include the creation of a business incubator for start-up and early-stage businesses and help the Town identify and coordinate potential public and private actions in the downtown area in exchange for the shared use of Suite 301 in 122 East Chatham Street.

The council’s last discussion item was a rezoning proposal to allow multi-family on Stephens Road just off Piney Plains Road which was denied.

Friday I participated in the weekly Metro Mayors conference call to hear a legislative update.

The conference all lasted about 30 minutes and had roughly two dozen mayors participating.

We continue to see strong growth in Cary.

Emails from staff this week also included information on available acreage for development within our planning jurisdiction. The total acreage for Cary in both Chatham and Wake Counties is 8,464 acres which is a little over 13 square miles. The develop-able acreage in Cary’s portion of Wake County is 6,010 acres or 9.39 square miles.

Develop-able acreage includes properties that are vacant or that have extremely low value of improvements relative to parcel size and do not have approved or submitted site or subdivision plans. These figures do not include developed or under-developed sites that have the potential for redevelopment.

Emails from citizens this week included a concern about Lake Crabtree Park, a concern about potholes on Cary Parkway, a request to know the opening of a hot yoga business, and several requests to approve and deny rezoning proposals.

Next week’s activities are all meetings and events. They include the Parks, Recreation, and Cultural Resources Volunteer Banquet, my first meeting as vice-chairman of the Capital Area Metropolitan Planning Organization’s Executive Board, and a Mayors Association outing.

Well, that is all for this week. My next post will be on Sunday, February 22nd. Although I have Facebook and Twitter accounts those are not the best means of communications with me. Please send all Town of Cary questions or comments to Harold.Weinbrecht@townofcary.org and email personal comments to augustanat@mindspring.com.

How To: Plan for Your Wedding