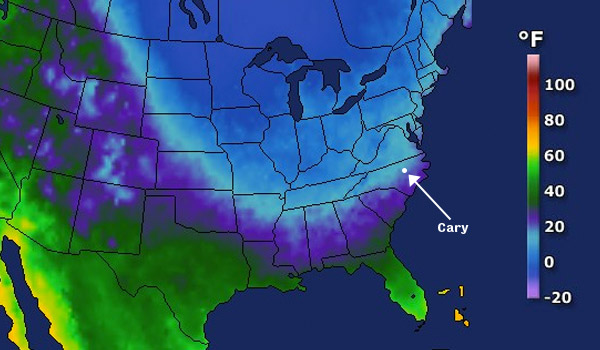 Cary, NC — Temperatures in the single digits are headed to the Triangle this week. We could break a record for coldest recorded temperature in Cary on Wednesday and Thursday.

A huge arctic blast stretching from Montana to New England and reaching south to Arkansas and Tennessee is lumbering across the U.S. toward North Carolina.

Average Temps in Feb for Cary

Take a Blanket in the Car

Wear proper winter clothing if you are going to be outside for any extended period of time. Throw an emergency blanket in the car if you have to drive around.

Next week, temps rise to the 40’s. Not exactly balmy, but better than arctic.

Picture and weather data from AccuWeather. Additional data from the National Weather Service.

Grammatical data from articisms. Viz: whether or not to capitalize arctic:

The Arctic Institute of North America writes in their style manual: