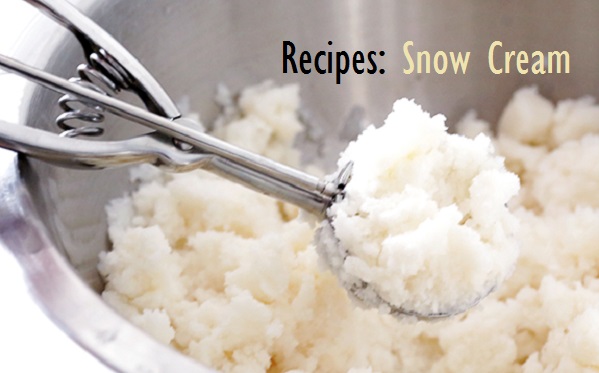 Cary, NC — Have you ever made snow cream? Many Cary residents (especially those from the north) haven’t heard of the delicious ice cream-like treat. This week’s snow wasn’t favorable for snow cream-making but, next time it snows, have this recipe ready. Trust me, you’ll want to try it.

What is Snow Cream?

Snow cream, like the name suggests, is made of snow and a sweetened milk mixture. It’s so easy to make (and very much worth it), but it can’t be made with just any old snow. This week’s snowfall, for example, lasted only an hour before sleet began to fall. The result? Hard, icy snow.

Snow cream snow needs to be powdery and fluffy–just like the snow that you use for snowball fights, snowmen, and snow angels. And, to make snow cream, you need at least two–sometimes three–large bowls of fluffy, clean snow.

I collect snow for snow cream in one of two ways–if you’re patient, and if it snows for awhile, you can set 2-4 large bowls out to collect fresh-fallen snow. For a quicker snow collection, lightly brush the top layer of snow off cars, porches, etc. The snow has to be several inches thick for this–you want to avoid “dirty” snow that has touched cars or other surfaces.

Snow fluffy and deep enough for snow cream isn’t rare in the south, but it’s not common, either. Perhaps this is why we make it while some northerners have never heard of it.

Have the ingredients below on-hand and, next time it snows, you’ll be ready.

How to Make Snow Cream

There are two ways to make snow cream–both are easy, but one is extremely easy. And, honestly, that version is just as good as the homemade version. Both options are below.

I like my snow cream plain–but I have added cocoa, cinnamon, chocolate syrup, or sprinkles in the past. It’s delicious no matter what.

Story and recipe by Jessica Patrick. Photo by Gimme Some Oven.

Photos from the Invasion vs. Cary Police Benefit

Weekend: RV Show and Save a Life Gala
Scroll to top