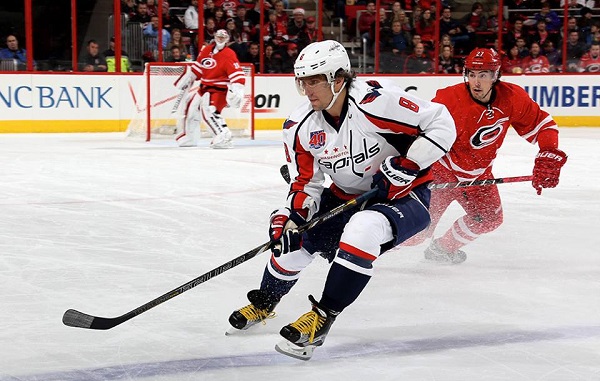 Raleigh, NC — The Carolina Hurricanes were successful on their home ice last week, as they won two games against two competitors at the PNC Arena on Tuesday and Friday. Some will say they also won off the ice, as they traded two players for draft picks and prospects.

On Tuesday, February 24, 2015 the Canes beat the Philadelphia Flyers 4-1 with a strong team game. The Flyers are in a desperate mode to make the playoffs and seemed to play without team chemistry or, even, interest.

Much of that can be due to the fact that the Canes stepped up their game. It was somewhat of an emotional day, as Cam Ward was playing in his 500th game. 63 other goalies in the history of the NHL have played in 500 games; just a handful have played that many with one team.

The Canes started off the scoring early in the first. With the Canes on the powerplay, Elias Lindholm had the puck along the half board and was taking his time looking for someone in scoring position. Lindholm saw Eric Staal in the high slot and made the pass that bounced off a defender’s skate right to Staal, who quickly passed to Justin Faulk on the left point.

Faulk sent a quick, hard slap shot that easily beat Rob Zepp for a 1-0 Cane lead. About ten minutes later, the Flyers tied the game after Nick Grossman made a surprise move by jumping off the blue line and then sending a shot past Ward to tie the game.

Early in the second period, Alex Semin took the puck down the right wing into the Flyers’ zone then sent an amazing pass completely across the ice right on Jeff Skinner’s tape. Skinner wasted no time in picking his spot inside the far post, beating Zepp for a 2-1 Cane lead. From there, the Canes never looked back.

Late in the period, with the Canes back on the man advantage, Victor Rask had the puck along the boards and then passed to Faulk on the blue line. Faulk passed to Semin in the slot, who quickly turned and shot with Jordan Staal pouncing on the rebound and putting in high stick side for a commanding 3-1 lead.

Jay McClement closed out the scoring in the third on a very nice back pass from Brad Malone and gave Ward a memorable win in his 500th game.

On Friday, February 27, 2015, the Canes had a classy ceremony before the game to recognize Cam Ward and his 500th game. There were several congratulatory film clips on the Jumbotron from current and former teammates. The three key clips included one from good friend Andrew Ladd, one from Rod Brind’Amour, and, without a doubt, Ray Whitney’s was the best, as it reminded Ward about scoring two goals against him at practice. 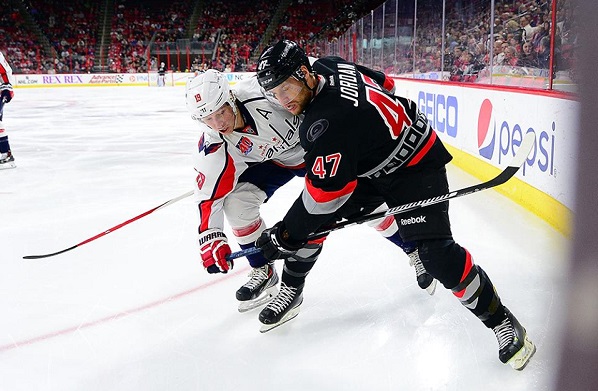 Ward had the night off, so Anton Khudobin was in net, and he paid respect on the Jumbotron and in net as he recorded his first shut out of the season. Then, the Canes completely shut down the high scoring Washington Capitals in another strong win of 3-0. This was the first game after the Canes had traded Andrej Sekera and Jiri Tlusty the day before.

Brett Bellemore scored his first goal of the season and, with that goal, all current roster players now have at least one. The goal came from some good hard play by Andrej Nestrasil, as he dug for the puck down-low and passed over to Victor Rask.

Rask bounced a pass off the boards to Bellemore on the right point and, with Nestrasil going in the dirty area of the crease, sent a wrister that surprised Branden Holtby for what turned out to be not only his first goal but also the game winner.

Jeff Skinner continued his hot streak with another precision shot. Riley Nash and Elias Lindholm were forechecking and digging for the puck deep in the Caps’ end. Lindholm found Skinner in open space about 20’ in front of the net and settled the puck then sent it far side for the 2-0 lead.

Nathan Gerbe closed the scoring, on the hardest working empty net goal of the year, late in the third period. Nestrasil cleared the puck from the Canes’ end with speedster Gerbe grabbing the puck and carrying it into the Caps’ end and, with Alex Ovechkin draped all over him, he skated cross ice then sent a back hander in sealing the game for the 3-0 win.

Up next for the Canes is a long streak of home games at the PNC Arena, with the first being a battle against the Minnesota Wild on Friday, March 6, 2015.

Canes coverage by Bob Fennel. Photos from the Washington Capitals on Facebook and from the Philadelphia Flyers on Twitter. Read more Canes coverage.