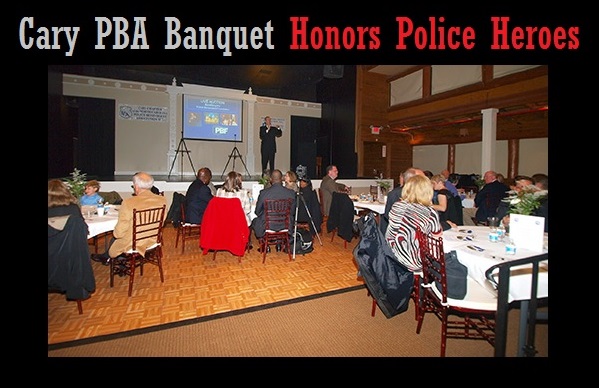 Cary, NC — The Cary Chapter of the Police Benevolent Association, or PBA, will hold an awards ceremony and banquet on Saturday, March 7, 2015 at Cypress Manor to honor and recognize both current and veteran police officers.

The divisions and chapters of the PBA exist to protect and serve police officers and their families while educating the public about the daily work of law enforcement workers and the sacrifices they make to keep their communities safe. These education efforts form ties and relationships that benefit both officers and the communities in which they serve.

The Cary Chapter does its part to take this process of education, partnerships, and relationship building to a new level. Each year, the chapter brings together elected officials, officers, and the community to both showcase the talents of current police officers and to honor the legacy of retired Detective George Almond.

Almond, a PBA member, was the first Cary police officer to be shot in the line of duty. In October 2001, during a traffic stop, he was shot in his forehead at close range by a driver. Despite suffering extensive injuries, he survived the shooting and returned to duty as a detective in juvenile investigations before retiring in August of 2004.

In their first year, the Cary Chapter Board chose to sponsor an Officer of the Year award in honor of retired Detective Almond. The “Officer of the Year” award, which is presented to a new officer each year, recognizes outstanding achievement in the areas of leadership, community service, mentoring, excellence in performance and valor.

This year’s banquet, held at Cypress Manor in Cary, will feature a live auction to raise funds for the Police Benevolent Foundation. A dinner and the awards banquet will be held after the auction followed by live music provided by Baileys Comet, a local band and community favorite.

The Cary chapter has been very committed to this project since its inception. This annual event has been a phenomenal success and speaks volumes to the respect that George Almond has with fellow officers and the community he once served. In creating this award we wanted to ensure that George’s sacrifice for the citizens of the Town of Cary is never forgotten, while at the same time recognizing exemplary performance by those following in his footsteps.

For further information please contact Randy Byrd at 1-800-233-3506 ext. 311 or by email at rbyrd@sspba.org. Obtain tickets for the event online.