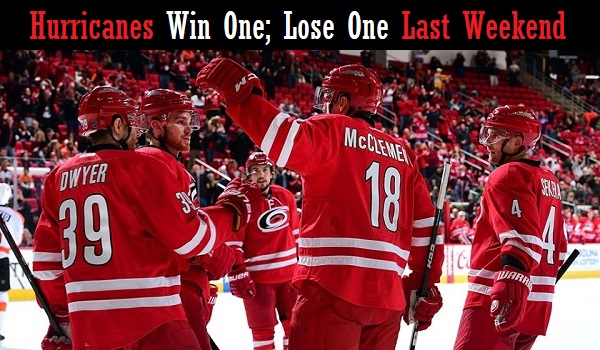 Raleigh, NC — The Carolina Hurricanes stayed busy at the PNC Arena last weekend. They lost to the Minnesota Wild 3-1 on Friday, March 6, 2015 but defeated the Edmonton Oilers 7-4 two days later on Sunday, March 8, 2015.

In a score of 3-1, the Carolina Hurricanes lost the opening game of a long home stand against the Minnesota Wild on Friday, March 6, 2015. The Wild team has certainly shown how to turn a season around–they started off horribly but have been on fire for the past 25 games.

So much so that they’re now tops in the wild card position in the west and are still rising.

The Canes started the game with what almost looked like a new team, as there were three skaters on ice who had not been with the team long. One new player, Rasmus Rissanen, was playing in his first NHL game after being called up from the Checkers.

While he was a -2, he did play well, and, whether that was his normal play or his first game and his “let’s impress the coach and fans approach,” he led all players with eight hits…some very crunching, eye-opening hits.

The Canes got called for a frustrating extra man penalty midway in the first. Their powerplay kill team, still #1 in the NHL, did a very good job again by limiting the Wild for time in the Canes’ end and for a few scoring opportunities against Anton Khudobin. Just seconds after the penalty ended, the Wild–Mikael Granlund–entered and crossed the blue line with the puck with Nino Niederreiter on his left.

Grandlund passed to Neiderreiter then made a cross-ice pass to Charlie Coyle, who was coming down the right side all alone and put it in for a 1-0 Wild lead. 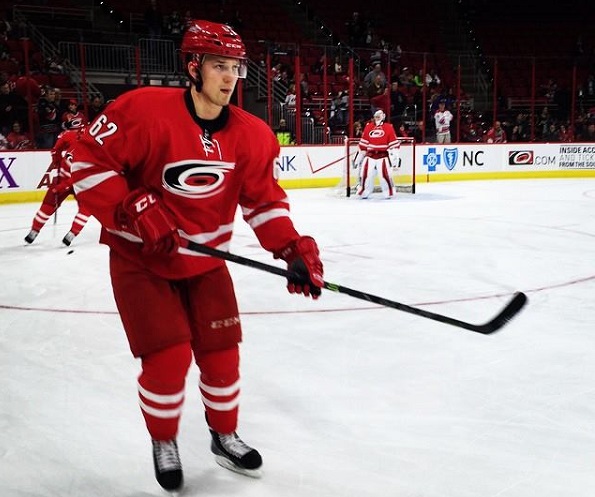 Skinner to Nash to Tie the Game

The Canes came out in the second with a little more jump. After a lethargic first with only five shots on net, the Canes amassed 16 in the second. Not many would be considered serious scoring threats, but the word from the bench was “throw the rubber and see what happens.”

After killing off two penalties in the first, the Canes had their first man advantage in the second. Both powerplay units looked good with the puck staying in the Wild’s end for long stretches. The passing was good and, for what few shots got through, the hottest goalie in the NHL, Devan Dubnyk, was solid.

Late in the period, Jeff Skinner grabbed the puck along the half boards in the Canes’ end and carried the puck up the left side with Riley Nash joining the rush on the right with a lone defender between them. Skinner dizzled and dazzled then sent a smooth saucer pass over the defender’s stick to Nash who buried it to tie the game at one apiece.

Whatever the Canes had in the second was lost in the third, and the Wild showed why they’re a team that should go far in the playoffs. With the Wild deep in the Canes’ end, they were simply given too much time and space, allowing Jason Pominville to circle with the puck and pass off to Mikael Granlund above the face-off circle. Pominville charged the net, and Granlund made a return pass, but the puck bounced off Chris Terry’s skate into the net.

The Wild started smelling blood and, just over two minutes later, after a bad turnover on a clear out of the D-zone, Pominville pounced on the puck and put a shot on net with Dobby making the initial save. Zach Parise got aggressive on the rebound for a solid 3-1 lead.

The Canes had a powerplay late in the period that could have closed the gap, but they failed to score. The Wild was pretty much playing turtle defense after that, settling on the 3-1 victory. I thought it was a good showing for Jack Hillen, who came over from the Capitals in the Tim Gleason trade. His speed and quick on the puck were impressive, and it appeared that he was comfortable with his linemate.

A Comeback Against the Oilers

The Hurricanes did what few teams have done this season–they came back from a 3-0 deficit and scored six unanswered goals in a 7-4 win against the Edmonton Oilers. The Oilers, like the Canes, have several very talented players and have been out of the playoffs since November. 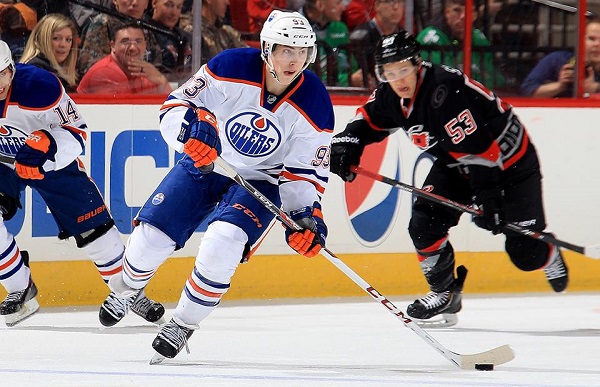 After a very poor showing Friday on night, the Canes came out strong early on Sunday and had six good shots in the first five minutes–dominating in all zones.

Midway in the period, Rasmus Rissanen safely brought the puck out of the Canes’ defensive zone but made a poor pass in the neutral zone that was picked off by Jordan Eberle (who left the puck for former #1 draft pick, Ryan Nugent-Hopkins).

Nugent-Hopkins went into the Canes with Rissanen, the loner defender, while the Oilers had another former #1 pick, Nail Yakupov, on the left. Using Yakupov as a passing decoy paid off, as Nugent-Hopkins sent one high glove side past Cam Ward.

It was a goal by the team with the second worst record after a strong first half of the period, but, after the goal, the wind left the Canes’ sails. Neither team is known as a physical team, but the Oilers were taking the Canes off the puck well while the Canes dominated in faceoffs and shots.

The Oilers got another powerplay on a questionable call against Alex Semin. Semin got called for hooking but, for the Caniacs, it looked like a very good back check. The Oilers scored on another power play a little over a minute later on another questionable call. This time, Eric Staal got called for goalie interference, but it sure looked like the goalie was above the crease and, also, may have been pushed by a defenseman for the slight contact with Richard Bachman.

If Coach Bill Peters was vocal about the poor play Friday night, no telling what he was saying to the players on the bench. Whatever words of encouragement or motivation were said, something worked as, from the Oilers’ third goal on, it was all Canes.

Right after the Oilers’ third goal, Semin tried to make things happen by carrying the puck through the slot. He got tripped then, while on his back, turned his stick on its side, got the puck on the hook of the blade, then sent one five-hole for what would be the NHL goal of the week.

At the 13 minute mark, the Oilers couldn’t clear the puck from behind the net, and the Canes did a good job of forechecking to send the puck to EStaal to the left slot. Staal passed up to Ron Hainsey who sent a wrister over to Elias Lindholm, camped out on the left post. who turned his blade for a classic tip-in. Less than a minute and half later, the Canes were on a five-on-three power play and tied up the game on nothing less than a passing clinic with Jeff Skinner settling a pass and calmly putting it top shelf.

The Canes dominance continued in the third on another powerplay goal. Victor Rask tipped the puck down to Lindholm below the goal line. Lindholm passed over to Andrej Nestrasil, who skated through the slot untouched, took his time, and picked out a top corner to put the Canes up for the first time, 4-3.

Five minutes later, with the Canes on another power play, Ryan Murphy had the puck inside the center area of blue line, passed over to Skinner above the right face-off circle, then sent a wrister through traffic into the short side from about 30’ out. Less than a minute later, Michal Jordan made a nice play to keep the puck in the Oilers’ end. Rask scooted the puck to EStaal then went low for the give-and-go.

Rask crossed the goal line then passed cross-ice to Lindholm who had an open net for his second of the night. Later on, Hainsey made an attempt to pass to a teammate to clear the puck from the corner, but Nugent-Hopkins intercepted the puck and sent it past Ward for a hat trick.

With the goalie pulled late in the game, EStaal had the puck and could have sent one 115’ for an empty netter, but fed Lindholm, who got his first career hat trick and a five point night. With the win, the Canes moved past Toronto, getting farther away from a lottery slot for the #1 draft pick.

The Carolina Hurricanes have three home games coming up this week at the PNC Arena:

Canes coverage by Bob Fennel. Photos from the Carolina Hurricanes and the Edmonton Oilers on Facebook. Read more Canes coverage.