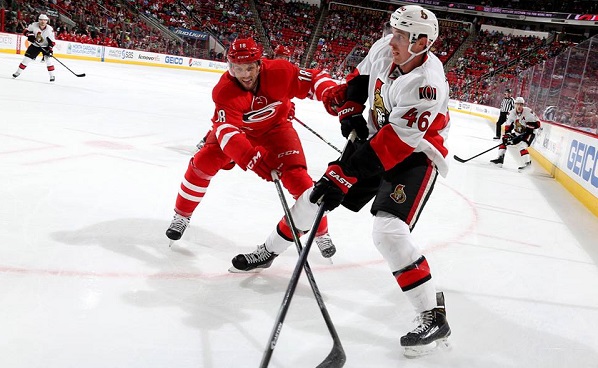 Raleigh, NC — For the third time in their past four games, the Carolina Hurricanes faced an opponent on the outside looking in for a playoff spot. The Canes had an opportunity to not only sweep the season series but to, again, be a spoiler, hindering their opponents’ playoff chance by winning. Unfortunately, they fell 2-1 in a shootout on Tuesday March 17, 2015 at the PNC Arena.

The Caniacs were well represented in the celebration of St. Patrick’s Day both in the arena and outside. MetLife, with a huge operation in Cary, had a wild tent event going on outside the arena before the game, and many Caniacs were donning their green and enjoying a beverage the Irish may also enjoy.

Lindholm Set Up by Skinner for Pretty Goal

At just about the 13 minute mark, John Michael Liles got possession of the puck in the Canes’ end and passed up to Jeff Skinner on the left wing. Skinner entered the Senators’ end, took his time, saw Elias Lindholm coming down on the right wing, made eye contact then threaded a beautiful saucer pass across the ice right on Lindy’s stick. Then, Lindy sent a slap shot in completing a very pretty play.

Canes Didn’t Show Up in the Second

The Canes had a sluggish second period and just couldn’t get the offense going. Give the Senators some credit, as their play increase significantly and they played with the desperation they needed to come out on top to get them closer to a playoff spot.

The Senators sent 16 shots towards Anton Khudobin, many of which he had to make acrobatic saves. With Justin Faulk and Brad Malone in the penalty box, the Sens kept constant pressure on Dobby, but he continued to make save after save. About three minutes after Malone came out of the box, the Sens tied the game on a normal five-on-four power play.

Canes Resurge in the Third But Fail in the OT

The Canes came to life in the third, improving their checks, forechecking much better and sending 18 shots on net challenging recent NHL story book story goalie, Andrew Hammond. However, Hamburgler was up to the task on every shot. The game went into overtime, which was worth the price of admission.

Both teams played hard, fought hard and both wanted the extra magic point. With just 14 seconds left in the game, All-Star Erik Karlsson stole the puck in center ice then passed up to Kyle Turris who entered the Canes’ end, took a shot and Mark Stone was there for the rebound for the 2-1 win.

The next home game is Saturday, March 21, 2015 against the NY Rangers with the first 5,000 in attendance getting a John Forslund twentieth anniversary t-shirt.