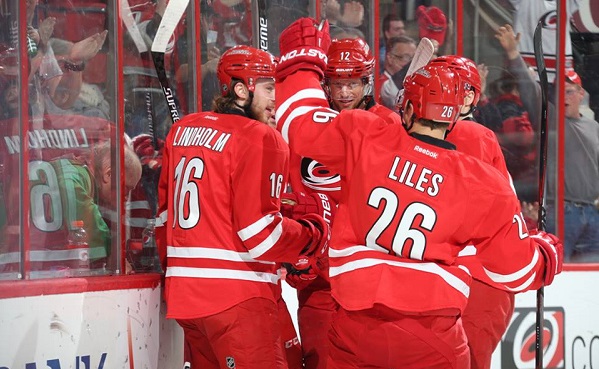 Raleigh, NC — If nothing else, the Carolina Hurricanes have been able to play against all the top teams in the NHL all season long. On Saturday, March 21, 2015, the New York Rangers were in town, and the Canes lost 3-2 in another shootout at the PNC Arena.

Just around the two minute mark, rookie Danny Biega was along the sideboards in the Canes’ end and made a quick touch pass to Victor Rask. Rask carried the puck through all three zones then dished off to Elias Lindholm coming down on the right wing.

Lindy took one stride, got just inside the left face-off circle and then sent a hard slap shot that squirted under Cam Talbot’s pads for a 1-0 Canes lead.

The play for the rest of the period was fairly equal with plenty of end-to-end action. The Rangers had more quality shots with Anton Khudobin stopping them all, some of which were very impressive. In one flurry, Dobby made three saves, about three seconds in which at least two Rangers thought they had tied the game.

Rangers Own the Second

The second period was all Rangers as the Canes, again, seemed to have a slow period. Early in the period, with the face-off to the right of Dobby, the Rangers won the face-off then had a set play that had JT Miller going behind the defense to collect a pass then went to the crease untouched for an easy backhander on Dobby.

Just under the five minute mark, the Rangers had an odd man rush that had the Caniacs thinking about the possibility of the Rangers taking the lead. Eric Staal came in late and slashed Dominic Moore’s stick so hard that his stick shattered.

Right around the 13 minute mark, the Rangers cleared the puck, but the Canes were slow getting back on defense, so slow that Jeff from Cary likened it to moving two houses and a piano on their backs. Kevin Hayes passed to Jesper Fast who turned around then sent a wrister high glove side for a 2-1 Rangers lead.

Canes Show Up in the Third

The Canes showed up in the third, as they were the more aggressive team. Forechecking improved, passing improved and the all-important shooting improved, as the Canes got off 17 while limiting the Rangers to just six. The Canes were pressing, and this certainly didn’t appear to be a game of the best in the Metropolitan division against the worst.

The game was well played by both teams with the third period being one of the more exciting periods the Caniacs has seen in a long time. Several Canes had their chances. 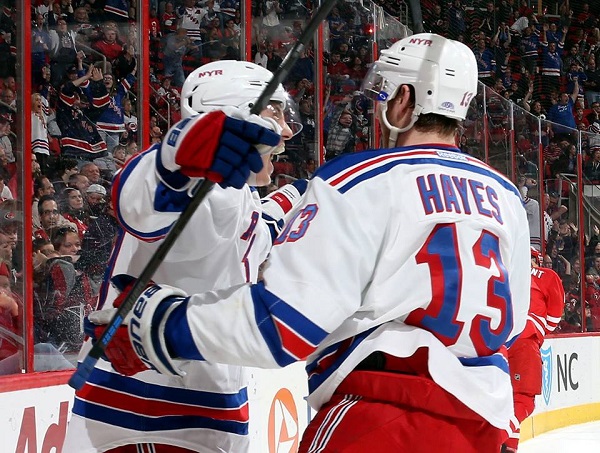 Rask broke free on the right side, sent a hard slap shot that Talbot made a stick save with the rebound bouncing off the post. A few minutes later, Nathan Gerbe also hit the post on a shot that, by all rights, he shouldn’t have been able to unload which is one more reason he’s become a fan favorite.

Murphy Ties It Up on a Powerplay

The penalty kill team came back to life as they went two-for-two in the game that saw few penalties overall. Late in the period, the Canes had a powerplay and, if they had hopes of tying the game, now was the time. Riley Nash was parked in front of the net and “Big Man” Jordan Staal was joining him to create the needed traffic.

John-Michael Liles had the puck, started at the left point and skated low circling the net then passed up to Ryan Murphy 10’ inside the blue line in the high slot.

Murph saw the traffic then sent as hard a shot as he could muster that hit a defender’s leg and still found its way into the net to tie the game.

The overtime period was typical with few hard scoring chances and conservative defense. The Canes couldn’t get any shots in the shootout with the Rangers’ Mats Zuccarello showing his skill and beating Dobby for the lone shootout goal for the 3-2 win. Prior to the game, there was a recognition celebration for John Forslund’s 20 years as an announcer for the franchise.

The Canes have four home games this week. The first is tonight, Monday, March 23, 2015 against the Blackhawks, and other home games are on Thursday, Saturday and Sunday.