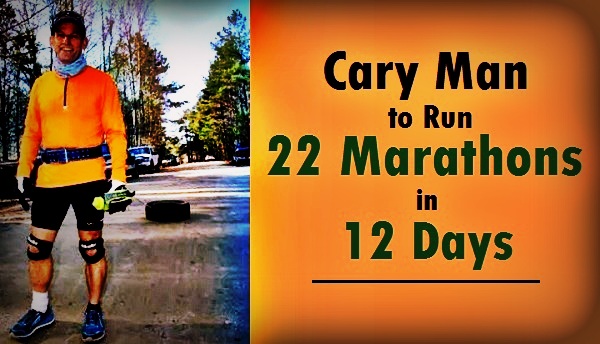 That’s a lot of running, even for David Cockman, who finished his first 200-mile solo run from Garner, NC to Atlantic Beach, NC last year.

This run, which he’s calling “The Murphy to Manteo 600,” will start tomorrow at the Tennessee/North Carolina border and end on an Atlantic Ocean pier in 12 days.

A marathon is about 26 miles and, to achieve his goal of completing 600 miles in 12 days, Cockman will need to run at least 50 miles a day. That’s two marathons back-to-back each day. Cockman may be able to claim a World Record after completing this run.

Cockman, a software programmer, is running the 600 miles solo to honor wounded veterans. The run is raising money for the Intrepid Fallen Heroes Fund (IFHF), a charity that ensures military personnel who were injured in service receive the best possible treatment.

The fund has provided more than $150 million to support wounded veterans and their families. In a blog post, Cockman expressed his hope for the difference this run will make:

Please let everyone know [about this] and come out and join me on the run. I hope that local media outlets along the route will help me publicize the great work that IFHF is doing and make veterans in the state aware of the programs that are available to help them in their time of need.

Cockman will document the places he eats and sleeps, and the people he meets, during his journey. To follow his path or make a donation to IFHF, visit the MurphytoManteo website and Facebook page.