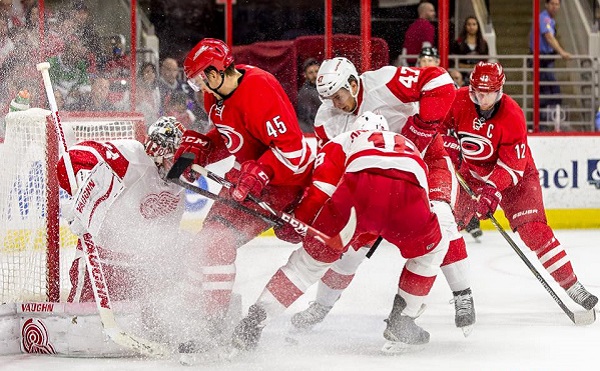 Raleigh, NC — On Saturday, April 11, 2015, at the PNC Arena, the Carolina Hurricanes lost their last game of the season to the Detroit Red Wings.

The Carolina Hurricanes lost the last game of the season, 2-0, against the playoff-bound Detroit Red Wings before one of the largest crowds in the past three months.

With the outcome of the game having no influence on the Canes’ position in the standings—aka the draft lottery position—the Caniacs were back to cheering their team on for a win. The problem was, as Coach Bill Peters says all too often, that the team did not start on time.

There was a point where it seemed as if the team wouldn’t even show up, as there was no energy in the first two periods.

A Rare Wrap-Around on Ward

The game was, essentially, over in 48 seconds when Landon Ferraro, son of former Hartford Whaler Ray Ferraro, scored on a wrap-around on Cam Ward for the early 1-0 lead for the Wings. Wrap-arounds on Ward are as rare as hat tricks were for the Canes this season.

The Canes were beat in every category in the first and only had one face-off win in the first ten minutes. Eventually, pride kicked in and the Canes won 32 of the 62 face-offs in the contest.

This was the eighth time that the Canes have been shut out this season. With the scoring talent the Canes have, that’s eight times too many, and that has to change. One obvious thing lacking was the Canes in front of the Wings’ net, which allowed Petr Mraxek a clear view of shots.

It was just the opposite in front of Ward with at least two Wings in the dirty area that never appeared to be asked, forced to leave or paid the price for staying. Defense is another thing for GM Ron Francis to address during the off-season.

Linesman Must Have Lost His Whistle

Ward was pulled with about 2½ minutes remaining then, with the puck deep in the Wings’ end, their defense sent the puck the entire length with John-Michael Lyles making the touch and expecting the obvious whistle for icing. For some reason, there was no whistle and no official yelling “No icing,” which happens all the time.

Lyles, expecting the icing whistle, may have let up a bit after the touch so, when the puck bounced back, Joakim Andersson was there for the easy empty-netter.

Captain Eric Staal had a frustrating discussion with the officials before the face-off and was clearly disgusted with the results. The Canes did keep the pressure on for at least killing the shut out for the pride, the fans and the every devoted Caniacs, but the shut-out prevailed. 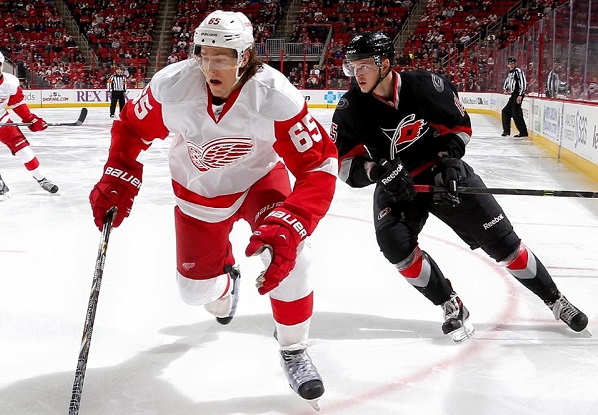 Francis Has Decisions on Draft and Players

The 2015 draft is solid through at least the first 15 players. The Canes pick fifth and, assuming they do not win the lottery, have their eyes on two particular players.

The LA Kings, like the Canes back in 2007, failed to make the playoffs after winning the Stanley Cup, so the Canes do not get their first round draft pick this year. That pick could have allowed Francis other options during the draft so, for now, the Canes have ten picks.

Keep reading CaryCitizen.com for updates during the summer, and Go Canes!