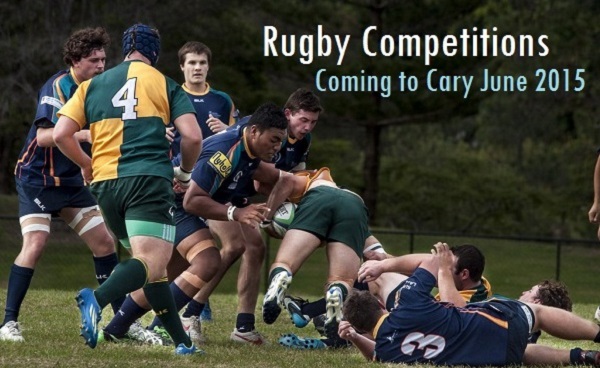 The Table Tennis Olympic Trials were held at Bond Park’s Community Center in Cary in 2012.

Now, Cary has nabbed another Olympic qualifier contest. This time, it’s the NACRA (North America and Caribbean Rugby Association) Sevens Championships with matches to be played in June 2015 at WakeMed Soccer Park.

Cary will host 24 teams during two days of back-to-back competition on Saturday, June 13, 2015 and Sunday, June 14, 2015. Rugby will make its Olympic debut at the 2016 Olympic Games to be played in Rio De Janero, Brazil.

Hill Carrow of the Triangle Sports Commission addressed the Cary Chamber’s Sports Alliance group last Thursday, April 9, 2015 with details about the upcoming play and what Cary can expect from the first-ever Rugby Olympic trials.

Not Your Typical Rugby

This won’t be the drunken, long-winded brawl that many associate with the sport. NACRA Sevens style of play is fast-paced and updated for the 21st century.

Teams are small, with only seven athletes per side versus the traditional 15 players per team, and matches last just 14 minutes. The field is half the size of a regulation soccer field.

In fact, at WakeMed Soccer Park, two games will be played side-by-side on the field where the RailHawks play. Audiences can expect high scoring and lots of running.

Teams Qualify Around the World

These Cary Rugby Olympic trials will be the best chances for the U.S. men’s and women’s rugby teams to gain their Olympic entry. There will be more matches and chances to qualify around the world all year leading up to the actual games.

There will be eight hours of play each day (exact schedule to be determined).

Tickets to watch the matches will be priced reasonably at $15-$25 per day or $25-$40 for the entire weekend. Seating will be general admission with higher ticket prices being placed in the center field area. For more information, check out the NACRA website.