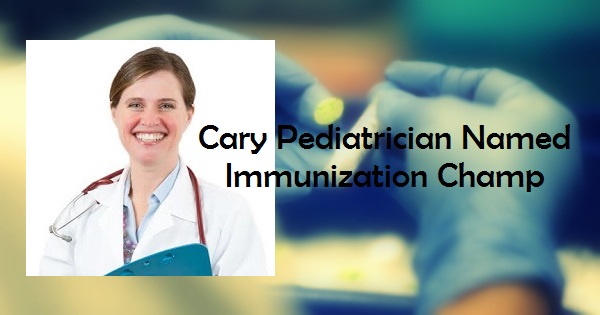 Each year, the Centers for Disease Control and Prevention (CDC) present a Childhood Immunization Champion award to individuals who make significant contributions to improving public health through their work in vaccinating children.

Annually, one champion is selected from each U.S. state. Winners are announced during National Infant Immunization Week, which, this year, took place April 18-25.

This year’s North Carolina recipient was Cary’s own Dr. Christine Macomber. Macomber, who works as a pediatrician at Generations Family Practice of Cary, said:

I am honored and remain committed to educating parents on the importance of vaccination in our community. The importance of childhood immunizations cannot be emphasized enough. In spite of many years of progress, we still must work to increase vaccination rates in order to protect children against disease.

Dr. Macomber was dedicated to promoting the importance of immunization early-on in her career as a pediatric resident at a Massachusetts medical center. There, she cared for a child with complications from varicella, or chicken pox.

Knowing that a varicella vaccine would have helped the child, the experience inspired her to dedicate her career to helping reduce unnecessary pain and suffering in children by encouraging parents to vaccinate their children in order to protect against serious, preventable diseases.

Now, at Generations, Dr. Macomber often engages parents in conversations about vaccination by posting and sharing immunization messages on her social media networks. She also takes time to talk with parents about the benefits of vaccination and addresses their concerns.

Macomber joined Generations Pediatrics in 2013 and has four children of her own. Congratulations, Dr. Macomber!

Story by staff reports. Photo from the CDC and AIDSVaccine.