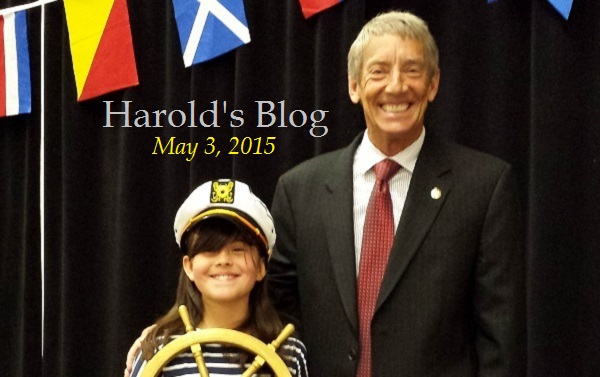 Cary, NC — This was another busy week for me as mayor.

Tuesday, the town manager and I talked about several items including water/sewer issues, intergovernmental issues and budget issues.

Later Tuesday, I joined council members Frantz, Bush and Yerha in a work session. Council members Smith and Robinson were on a Raleigh chamber inter-city visit to Austin, Texas. The work session had three topics.

In addition, council decided to increase these fees by 5% each year to keep up with increasing costs. Even with this fee increase, Cary will remain competitive with our neighbors. Cary’s new fees will be between Raleigh’s and Durham’s.

Our second work session topic was on setting a public hearing for Land Development Ordinance Text Amendments. The public hearing was set for May 21, 2015. These amendments are mostly to clarify the language of the transportation development fees ordinance and to make the language closer to the local bill that gives the town authority to charge these fees to developers.

Our last work session topic was on building design standards. The council agreed on the following:

Our work session concluded after about two and a half hours.

The purpose of my visit was to do a swearing in of their student captain of the day. After the quick ceremony, I answered questions from the students. Their questions were unrehearsed and impressive. The topics dealt with subjects like growth and authority to make decisions. Some of the easier questions were whether I was a dog or cat person. My visit lasted about 30 minutes.

This program provided students sessions to learn how municipal government functions, what services are provided and how citizens can become involved.

The students got a behind-the-scenes look at the Town government structure, its culture and how decisions are made. After a quick question and answer period from the students, the council members handed out course certifications and congratulated the students.

Thursday, I chaired a joint meeting of the Cary/Morrisville Joint Issues Committee.

Several staff members were also there to present information.

Our first topic of discussion was the McCrimmon Parkway Sidewalks at Davis Drive. The Morrisville section (about $75,000 worth) was funded a few years ago. The Cary portion (about $150,000) is not high enough on the sidewalk priority list to be budgeted for this year. All Cary sidewalks requests are reviewed and funded based on a set of criteria.

This proposal is below several other proposals. Morrisville stated that they may go ahead and implement pedestrian signals in the meantime.

Next the committee heard a report on the NC 54 corridor study.

The study will be finalized by this summer and includes NC 54 from I540 to Maynard Road. In a recent public meeting, it was reported that the intersection of Cary Parkway and NC 54 would have to be about 10 lanes to accommodate all the traffic. Instead, the study is focusing on creating a super street at that intersection.

Super Street designs require cars wishing to turn left to take another route to make that turn. Another interesting point made was that, regardless of the study, state funding has only been planned for the section from I540 to Cary Parkway. And, that funding would be in 2022. There is no funding for the remainder of the corridor.

Stay tuned for more details once the study has been completed.

The committee next discussed ordinances related to panhandling. Currently, Morrisville’s ordinance does not prohibit panhandling in the right of way. That is why there are several people in the medians of Cary Parkway at NC 54 every day. They are looking to change this.

Cary’s ordinance does allow panhandling, but it cannot be in medians or right of way. It is important to note that past court cases allow panhandling. Trying to prohibit it would certainly invite a lawsuit by the ACLU and others.

Golf course noise ordinances were discussed next. Cary will decide on its revision at a regularly scheduled meeting of the council on May 5, 2o15. Morrisville is looking to revise their ordinance.

In the information sharing portion of the meeting, council member Bush and town manager Shivar shared interesting observations about a meeting of the Cary council and Wake County Commissioners. We also heard from the Morrisville council members about a new Wake Tech campus that will be just north of McCrimmon Parkway.

Our committee will meet again in September.

Emails from staff this week included the 2015 first quarter report. Items of note include:

Read the Q1 Report in its entirety.

Next week will include a council meeting and a lot of travel for me. I will travel to Greenville, S.C. for an intercity visit and then Greenville, N.C. for my daughter’s graduation, then to Morehead City to move my daughter, and then back home.

Well, that is all for this week. My next post will be on Sunday, May 10th. Although I have Facebook and Twitter accounts those are not the best means of communications with me. Please send all Town of Cary questions or comments to Harold.Weinbrecht@townofcary.org and email personal comments to augustanat@mindspring.com.

From the blog of Cary Mayor Harold Weinbrecht. Photo with the student captain of the day at Atlas International School courtesy of Mayor Weinbrecht.

Polka Music in Cary: How It Started
Scroll to top