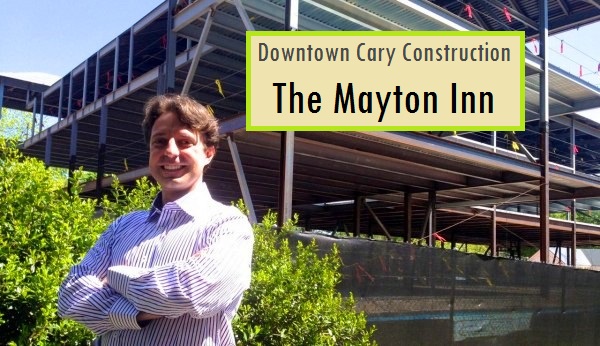 Cary, NC — If you’ve driven down Academy Street recently, you have probably seen the large steel structure that’s been erected near Park Street. It’s the soon-to-be Mayton Inn, a four-diamond hotel that will call Downtown Cary home by the end of 2015.

We caught up with owner Colin Crossman to hear how the project is progressing.

Colin, who, with his wife Deanna, also owns the King’s Daughter’s Inn in Durham, said winter weather put a kink in their construction plans. In the original timeline, the couple had hopes of opening last summer, but, with project approval delays, the groundbreaking did not take place until August (see story). Then, the winter of 2014-15 hit with snow and rain almost every week.

Colin told CaryCitizen that the soil on the site requires installation of a special type of piers (Vibro piers) to support the future height and weight of the building. The wet weather and snows began in December and postponed this phase of construction until March.

Quickly after the piers were installed, passersby saw the steel beams go up. Now, the framework of the building can be seen, including the attic roof on top. The construction team has tried to catch up on their timeline as much as possible, and Deanna says the couple is hoping to open the inn by Thanksgiving if everything goes smoothly.

Once the roof is on the building, construction can speed-up on the interior, as weather will no longer play a part. Right now, steel decking is being put in place to lay the concrete floors. Next, a lightweight steel grid will be constructed on the outside of the building, which will allow contractors to begin the exterior brick walls.

The exterior brickwork will take several months to complete.

It was originally hoped that the Inn would be open before the 2014 Lazy Daze, and, then, it was hoped to be open by the 2015 Lazy Daze. Now, the couple is hoping for Thanksgiving, but that could turn easily turn into December.

Deanna added that the biggest challenge of the project thus far was getting the construction work planned. The grading of the site took place August through November. Then, weather delays held up the foundation work. Some of the future work will be dependent on the timing of the Town of Cary’s Academy Streetscape project (which was delayed itself).

The building will include three main floors as well as a daylight basement. The main floor will house the kitchen, two meeting rooms, the lobby, the bar and restaurant. The basement and attic will house mechanical operations. The second and third floors will have 43 guest rooms.

The Crossmans launched a contest to name the restaurant. The name that won? Veranda. The restaurant will be adjacent to a cozy 20-seat bar and area called The Library where guests can sip their drinks. The piece de resistance? The 3,000 square foot patio terrace overlooking the Town’s soon-to-be built Downtown Park. 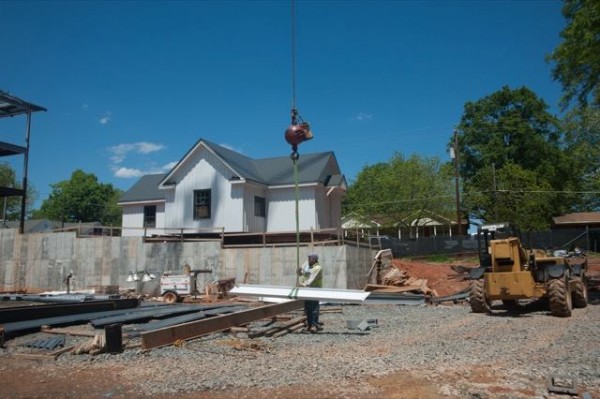 Part of the Mayton Inn will include the yellow house (called The Mayton House) currently located near Ashworth Village. It will be moved across the street to the back of the property, and, eventually, Deanna and Colin will live there. A second house, The Waldo Rood House, currently sits at the back of the property awaiting a permanent foundation. In the future, it will be booked as a bridal suite after its renovation is complete.

Colin is hoping to schedule a hard hat tour in the coming months where interested members of the Town and of the Media can take a tour of the interior as construction comes further along.

Once an opening date is clearer to being announced, the Crossmans also want to plan some sort of gala or fundraiser for a charity. They did something similar when they launched the King’s Daughter’s Inn and raised funds for Durham’s Habitat for Humanity.

Deanna says that, once the steel beams went up, neighbors have been stopping by the sight to say how excited they are. The Crossmans are hoping to become a big part of the Downtown community. The recent openings of Crosstown Pub, Academy Street Bistro, Belle and the Pharmacy Bottle Shop have contributed to lively evenings Downtown. The Mayton Inn will plan some “Fridays on the Front Porch,” similar to what the Carolina Inn does in Chapel Hill.

Perhaps during Lazy Daze next year, a band may even play on the roof of the porte cochere.

If you would like to stay informed about what’s happening with the Mayton Inn, visit their blog or Facebook page, where the Crossmans hope to add construction photos as they happen.

We look forward to that hard hat tour!

Story and photos by Lindsey Chester. Read more about construction in Downtown Cary.

Downtown coverage on CaryCitizen is sponsored in part by Studio 180 Salon.

Photos: The Surrender That Ended the Civil War