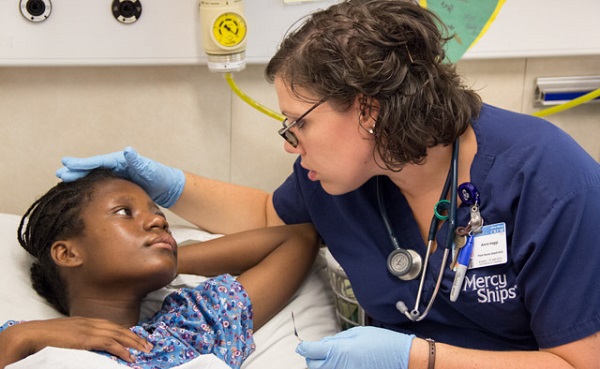 Cary, NC — Anna Iraggi, a nurse from Cary, is volunteering onboard the world’s largest civilian hospital ship, the Africa Mercy, which is currently docked in Madagascar, Africa.

Anna Iraggi worked as a cardiac intensive care nurse at the University of North Carolina Hospital before she joined Mercy Ships. Now, she helps care for patients onboard who have head, neck and facial tumors, disfigurements, cleft lips and cleft palates. Iraggi, who has spent the last six months volunteering in Madagascar, Africa, will return home to Cary at the end of May.

One of her patients, a young woman named Mona, was abandoned as a child because she was born with a cleft lip. “Her earliest memories are those of rejection, despair, and anything but love,” shared Iraggi. Iraggi cared for Mona after she received a free operation to repair her cleft lip onboard the Mercy Ship. She stated:

I saw a shy, withdrawn girl transform into a bright, bubbly, excited young woman who was ready to begin her new future! Through being here, my eyes have been opened to the fact that we cannot change the whole world, but we can change the world for one person. Each transformation has meaning and purpose.

Mercy Ships commends thousands of nurses who have volunteered on their hospital ships since 1978. Nurses have helped Mercy Ships provide more than 78,000 free surgeries, helped teach over 183,000 people basic healthcare, mentored African nurses and provided expert pre-operative and post-operative care to patients in the wards.

Art: Meet the Painters of Downtown Cary
Scroll to top