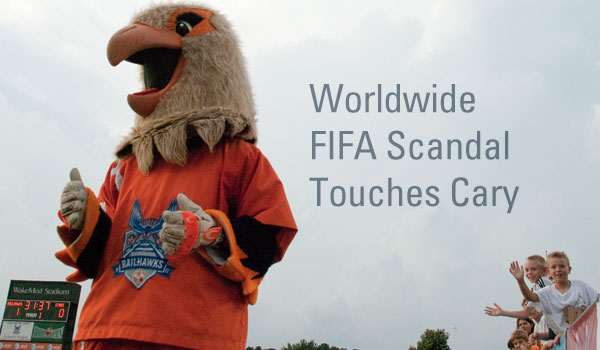 Cary, NC — Yesterday, seven of the world’s top soccer officials were arrested at a five-star hotel in Zurich. But, far from Switzerland, the massive corruption scandal has washed ashore in the U.S., engulfing Traffic Sports USA, majority owner of the Carolina Railhawks, who play at WakeMed Soccer Park in Cary.

The corruption charges are tied to World Cup bids as well as sponsorship and marketing deals.

According to reports in The New York Times, Reuters and ESPN, top officials at FIFA ran a kickback scheme netting tens of millions of dollars for consideration to host the World Cup in locations including South Africa, Russia and Qatar.

Other indictments include charges of operating a kickback scheme in relation to the awarding of sponsorships and marketing opportunities. Jose Hawilla, founder of Traffic Group in Brazil, the parent of Traffic Sports USA, pleaded guilty to racketeering, wire fraud, money laundering and obstruction of justice. Hawilla also agreed to pay more than $151 million.

U.S. Attorney General Loretta E. Lynch announced the charges and said that “they expose widespread corruption in the soccer organization.”

The indictment alleges corruption that is rampant, systemic, and deep-rooted both abroad and here in the United States. It spans at least two generations of soccer officials who, as alleged, have abused their positions of trust to acquire millions of dollars in bribes and kickbacks. It has profoundly harmed a multitude of victims, from the youth leagues and developing countries that should benefit from the revenue generated by the commercial rights these organizations hold, to the fans at home and throughout the world whose support for the game makes those rights valuable.

In the United States, 14 soccer executives were indicted by the U.S. District Attorney, including Aaron Davidson, President of Traffic Sports USA, majority stakeholder of the Carolina Railhawks in Cary.

The indictment, which is related to the US Attorney General’s Office’s investigation into corruption in FIFA, was unsealed in federal court in Brooklyn, New York, on Wednesday morning, May 27, 2015.

On Wednesday afternoon, the NASL (North American Soccer League) suspended Mr. Davidson and Traffic Sports from “all business activities between the league and Traffic Sports, effective immediately.” The Railhawks play in the NASL.

Local management will continue daily operations, according to the NASL statement:

The Carolina RailHawks, the sole NASL club owned by Traffic Sports, will continue to operate in the ordinary course of business. The club’s management team will continue to manage the day-to-day operations.

Triangle Soccer Fanatics, or TSF, a nonprofit Triangle soccer group, is advocating for the RailHawks to have Triangle area-based ownership.

Jarrett Campbell, President of TSF, said in an email:

We support the players, coaches, and administrative staff of the Carolina RailHawks Football Club. As we see them work tirelessly, on and off the field, with minimal budget and resources, to grow the game of soccer here locally and entertain their fans, it angers us to learn of these corruption charges.

SBNation‘s Stephen Schmidt echoed the sentiment: “Traffic has been slowly reducing their role with the league, and were down to just a single club that they own (Carolina RailHawks) who they were attempting to sell. Hopefully this morning’s news expedites that process, and sees both Davidson and Traffic end their relationship with the NASL fairly quickly.”