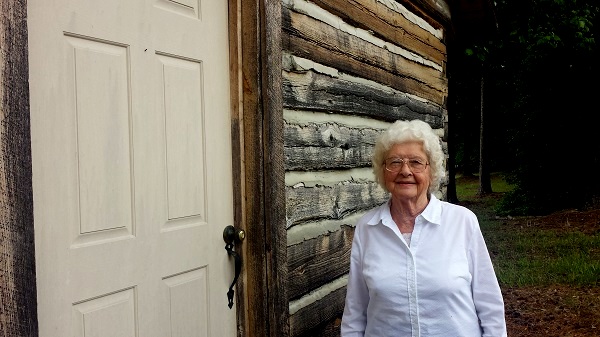 Cary, NC — On Friday, May 15, 2015, I visited the Upchurch Farm. While I was there, Mrs. Upchurch took me on a tour of her antique treasures from days long ago.

A Visit to the Upchurch Farm

Last week, I visited the farm again, but, this time, I visited Mr. Billy Upchurch’s wife. Mrs. Upchurch showed me a barn of antiques and told me the story of how she met her husband.

The Story of the Barn

Before I tell you about the beautiful history of Mrs. Upchurch’s antiques, I’ll share the story of the barn in which they all rest. The barn, pictured below, was moved to the Upchurch Farm in 1976 and rests right beside Mr. and Mrs. Upchurch’s home.

When Mrs. Upchurch responded to a newspaper listing to inquire about the barn, she was surprised to learn that she knew the family who was selling it.

I’d been wanting a log cabin, you know, how you have those dreams of things, and one day I saw it advertised in the paper. I called, and the man said, “Your voice sounds familiar.” He was my neighbor; five miles down the road at Carpenter! And so we didn’t have far to move it. 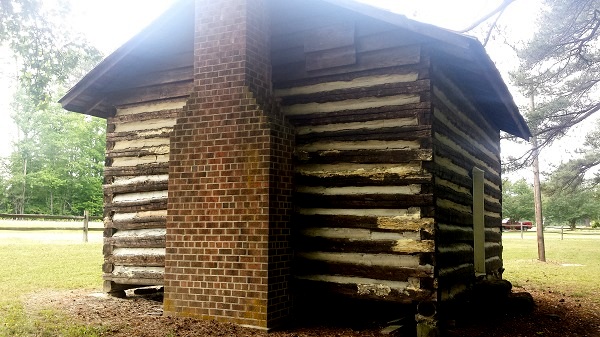 This barn was moved to Mrs. Upchurch’s yard in the 70’s. Before that, a family lived in it only five miles away.

Together, Mr. and Mrs. Upchurch rebuilt the roof and the chimney, but everything else about the cabin stayed as it was originally. Mrs. Upchurch told me that:

The man, [who was selling it], his mother, had been one of the children in this cabin. She said that the cabin was, originally, as it appears today; just one cabin and one door. But, as their family grew, they would build on another door and another room. That’s why [when we found the cabin] it was surrounded by a house.

Many of the antiques in the cabin were found by Mrs. Upchurch, but even more were donated from the community. One of the doors that Mr. and Mrs. Upchurch added, for example, came from the Good Hope Baptist church. Mrs. Upchurch saved as much of the old brick as she could to make the hearth, and she hung a pot holder over the chimney. She told me that:

Everybody wanted to see inside, so, when I got it finished, everybody was bringing me an old piece to put in it to say that they had contributed to it. 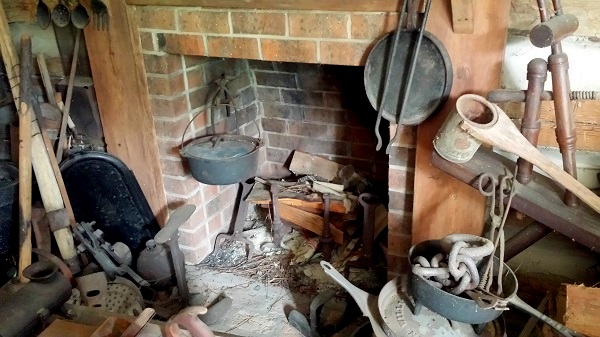 The barn was, mostly, in its original condition, though Mr. and Mrs. Upchurch added some special touches. 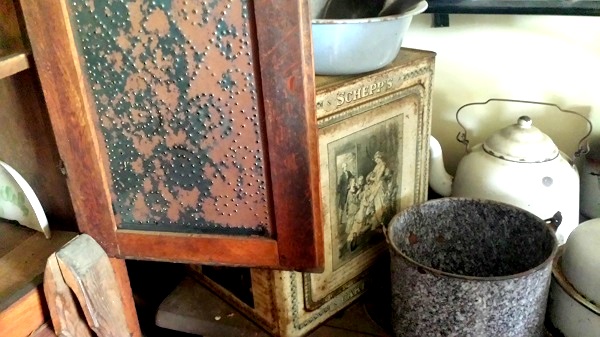 In this photo, you can see the old milk pail (blue) resting beside a cream-colored cake box.

Some of the other antiques in the barn included an old milk pail, a candle holder from Mr. Upchurch’s uncle, an old wooden ironing board, handwoven baskets, an old meat grinder, cobblers’ tools that were used to repair shoes, a corn sheller, a baby cradle from a lady from the NC mountains, a cheese grater, a wall hanging and more.

Mrs. Upchurch pointed to some of the furniture in the cabin–a table with chairs, an old stove and a spinning wheel, and said that, “The year of the Centennial, the agriculture department wanted this furniture to make a little area at the state fair, so they used it then.” 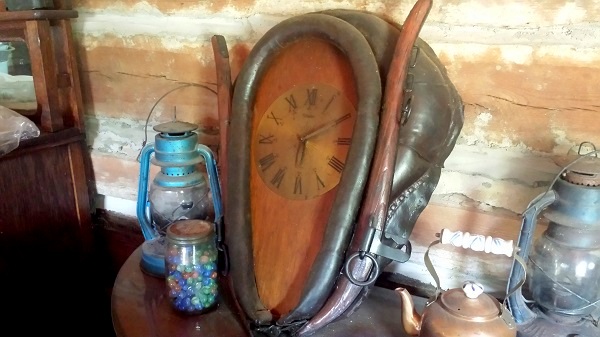 A collar and hames-turned clock beside vintage lanterns and old marbles.

Editor’s Note: Thanks, Mr. Clayton, for telling us city folk what this was! 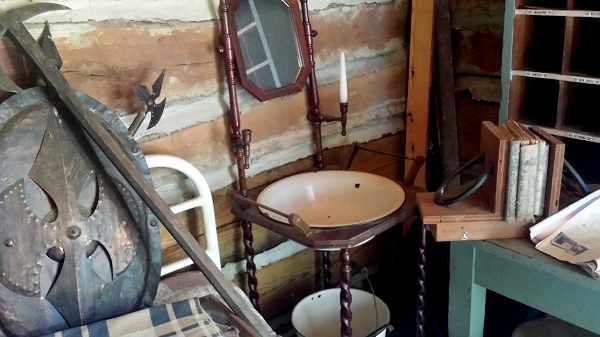 A mirror and wash station with candle holders for light.

Mrs. Upchurch continued to show me around, naming odd-looking tools that I had never seen before. One tool was used to stretch wire for fences to keep cows in; one tool was used to create even spaces in fields to know where to plant crops. Almost all of the antiques reflected the days when many farmers were self-sufficient; when they made everything themselves.

“Even as old as I am,” Mrs. Upchurch said, “I don’t know what a lot of these are. I’ve had to slow down, because I’m running out of room, but this is something I’ve always enjoyed doing.”

Mrs. Upchurch continued to show me old wine barrels “from Billy’s grandfather.” She said that, “his family used their apple orchards to make cider and they kept it in these barrels.” Mrs. Upchurch remembers hanging milk down the well to keep it cool when they didn’t have any ice. 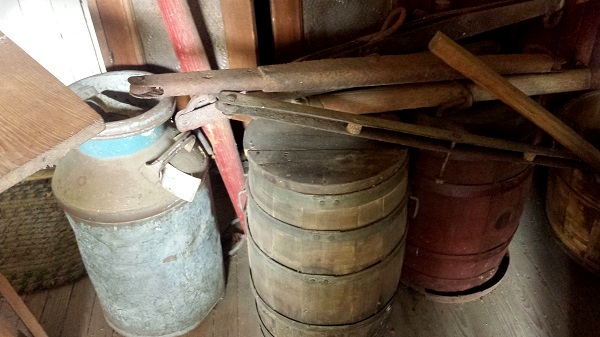 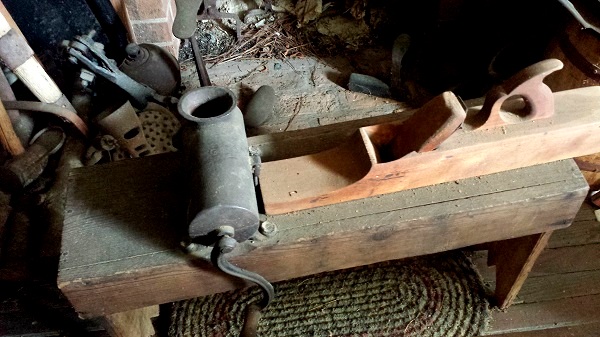 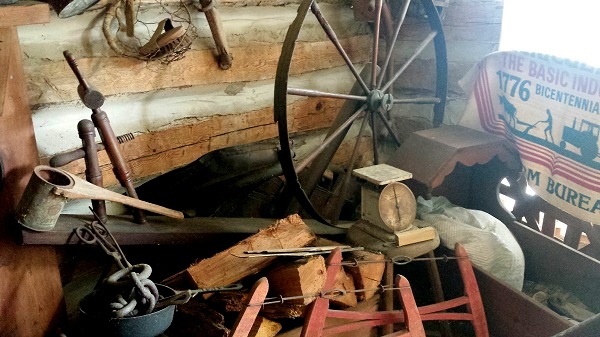 It was hard to not take pictures of everything I saw. 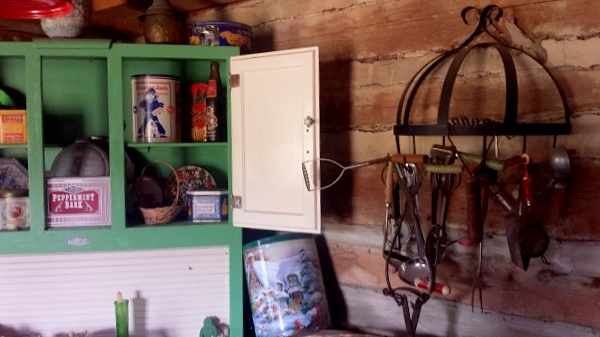 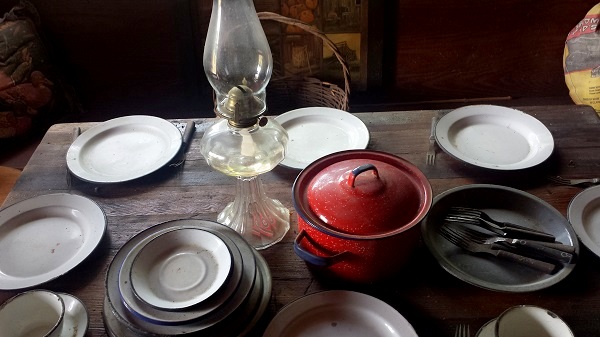 Mrs. Upchurch scrubbed and scrubbed this table, but it still felt greasy to the touch from its days in the Upchurch meat curing barn. 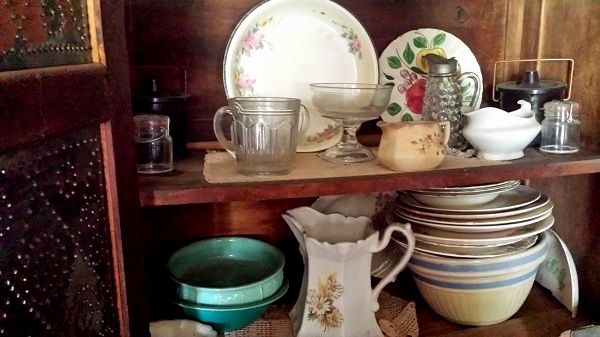 Perhaps the neatest story I heard from Mrs. Upchurch was the story of how she met her husband. Amazingly, both Mr. and Mrs. Upchurch lived in Cary as children.

Mrs. Upchurch told me that, before she dated Mr. Upchurch, he drove her school bus, and that “she didn’t even think about him then.” She went on to say:

Billy said that he came to my house one Christmas Eve and knocked on the door, and my daddy went to the door and said “There’s a young man who wants to come in and see you.” Back then, we didn’t have the whole house heated, so Daddy built a fire in my living room, and that was the beginning of our romance! We dated through high school; I went off to Wingate for college, and he went to NC State, and we married and started having babies and growing tobacco! 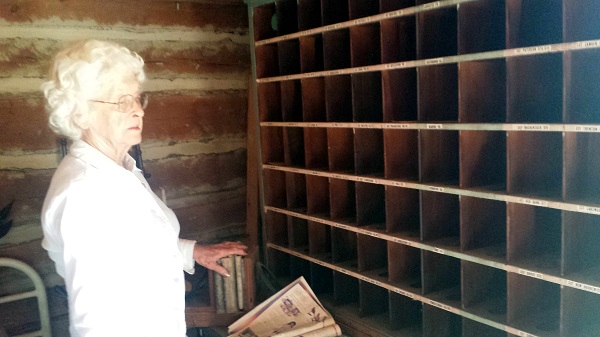 Mrs. Upchurch reflects on the first time she and Mr. Upchurch met.

I’ll visit the Upchurch Farm again soon to get an update on their farming operations for the year, so stay tuned for more stories about my favorite farmers in Cary.