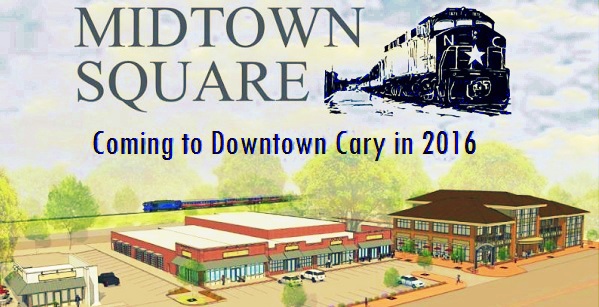 Cary, NC — On Thursday, June 4, 2015, at the monthly Heart of Cary Association meeting, Jordan Gussenhoven of Chatham Street Commercial shared information with members about Midtown Square, a new redevelopment coming to Downtown Cary in the next year.

The new Midtown Square will rest on the northeast corner of Walker and Chatham Streets in Downtown Cary. The project will consist of both a redevelopment of 215 E. Chatham Street and a renovation of the existing midtown shopping center that is currently on the site. 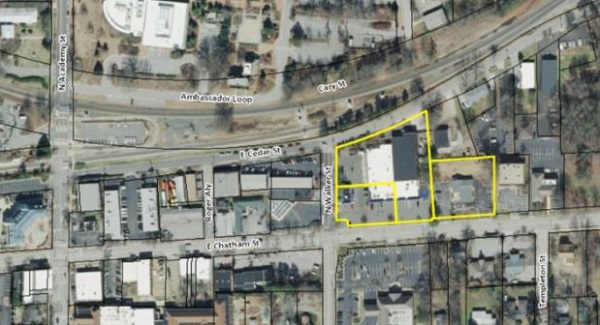 The Midtown Square Office Building redevelopment will feature a total of 22,604 rentable square feet, with 2,876 of the space being retail, 19,728 being office and 2,899 being a third floor loft, which will be a unique design with exposed wood trusses and direct elevator access.

The office building will be a full service building with water, electrical and janitorial services included in the rental rate. It will also have Class A construction and finishes.

A large, open patio area will connect the Midtown Shopping Center with the office building. Gussenhoven is targeting ground floor retailers that will “activate the patio,” like a coffee shop. Different businesses will share the patio, hopefully “giving life to Chatham Street.” 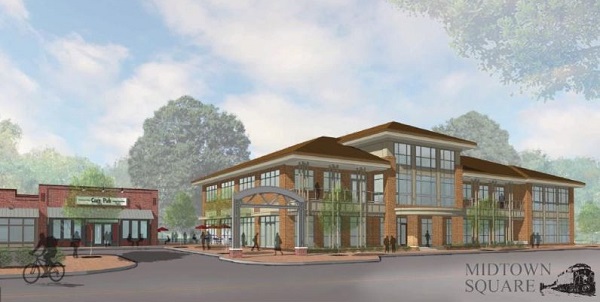 A front view of the site plans.

A warehouse that currently rests on the site will turn into a brewery called Bond Brothers Beer Co. This space will be a 4,300 square foot brewery with a 2,400 square foot taproom and a 2,500 square foot beer garden. “We think this will be a great anchor for the project; a great gathering space for Downtown,” Gussenhoven said.

A view of the brewery plans.

A Neat Fact About the Midtown Logo

In North Carolina, the numbers on locomotives reflect the years in which various NC towns were incorporated. Two locomotives are coming on-line later this year, one of which will be named 1871 for the Town of Cary. The Midtown Square logo is an illustration of the Cary train.

Support for Caregivers: You’re Not Alone