Cary, NC — 17 year-old Jenny Wang of Cary just won a $10,000 Davidson Fellows Scholarship for her novel computer vision algorithm that allows for more efficient and effective analysis of the brain. She is one of only 20 students from across the country to receive the honor.

Her project is a novel computer vision algorithm that can help create high-resolution 3D visualizations to allow for more efficient and effective analysis of the brain.

The project sounds complicated, yes, but Jenny’s inspiration for it is quite simple.

Jenny’s favorite superhero is the “technopathic” Iron Man, who has a psychic ability to control electronic machinery and/or read electronic signals.

These powers inspired her to create real brain-controlled technology when her family was almost involved in a car crash during a road trip to Disneyland. Her father accidentally swerved the car into a neighboring lane when he closed his eyes and yawned.

“There must be some way that we can detect brain fatigue and stop the car, like J.A.R.V.I.S. was able to detect Tony Stark’s mental state and adjust his suit accordingly,” Jenny thought.

From there, her project took shape. “My technique can automatically analyze terabytes of neuroimaging data to accurately identify and map brain tissue, completely eliminating the need for time-consuming human intervention,” Jenny said. These 3D visualization have tremendous potential to change how we study the structure and function of the brain. 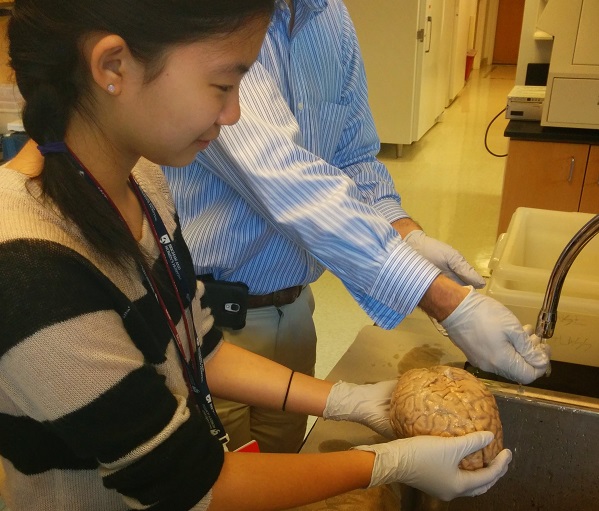 Jenny won a $10,000 scholarship for her project from the Davidson Institute of Talent Development. The Davidson Fellows Scholarship program offers college scholarships to students 18 or younger who have created projects that have the potential to benefit society in the fields of science, technology, engineering, mathematics, literature and music.

Jenny is one of only 20 students from across the country to receive this honor.

What’s Next for Jenny?

Jenny is a 2015 graduate of North Carolina School of Science and Mathematics and will attend Harvard University in the fall. In 10 years, she said, she can see herself “traveling the world, working in an engineering or math-based field where I can work on projects I’m passionate about and volunteering with underprivileged children.”

Jenny and the other 2015 Davidson Fellows will be honored for their accomplishments at a reception in Washington, D.C., on September 29, 2015.

Story from staff reports. Brain photo by A Health Blog. Photos of Jenny from the Davidson Institute for Talent Development.