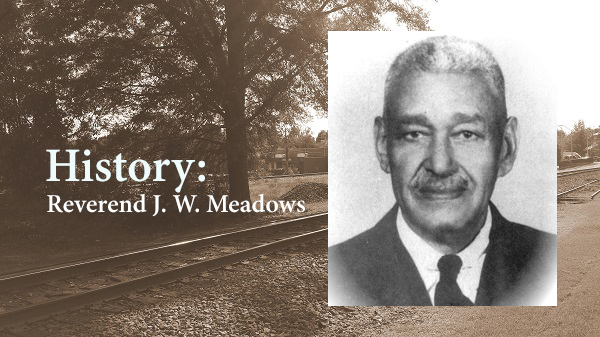 Editor’s Note: Many thanks to Kris Carmichael and Jimmy Gibbs for their help with this story.

Cary, NC — I sat down with Jimmy Gibbs to hear more about his great grandfather, Reverend J. W. Meadows, a leading minister for Cary’s African American community in the early 1900’s.

Do you recognize this face? 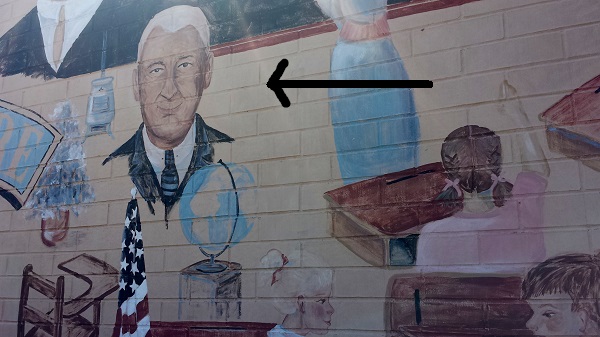 I do – it’s one of the many recognizable faces on the side of the Sorrell’s building in Downtown Cary. I’ve driven past this face a hundred times, but it wasn’t until last week that I learned who the man was. His name is John William Meadows, and he was a leading minister and educator for the African American community in Cary in the late 19th century to the mid 20th century. I interviewed his great-grandson, Jimmy Gibbs, who still lives in Cary today.

“I just visited my great-grandfather on the wall across the street,” Jimmy Gibbs told me as we sat down for orangeades in a booth at Ashworth’s Drugstore in Downtown Cary.

“I took so many pictures while I was in Honduras,” he said, as he scrolled though the 800 pictures in his phone to show me which face was his great-grandfather. Jimmy is a minister who works mainly in hospitals and urban settings, and he had just returned from a mission trip where he helped build houses for people with HIV and AIDS. He’s carrying on his family’s work – his parents were missionaries, and his grandfather and great-grandfather were ministers.

“I want to live a life where people recognize that someone cares for them as much as my grandfather and great-grandfather cared for people,” Jimmy told me.

Jimmy’s family is one of the historical families of Cary – and not just because his great-grandfather is one of the faces on the Sorrell’s mural. Reverend J. W. Meadows was a traveling pastor, a mentor, an educator and a principal at the Cary Colored School, which was right behind where the Cary Arts Center sits today. The black church was right beside it. 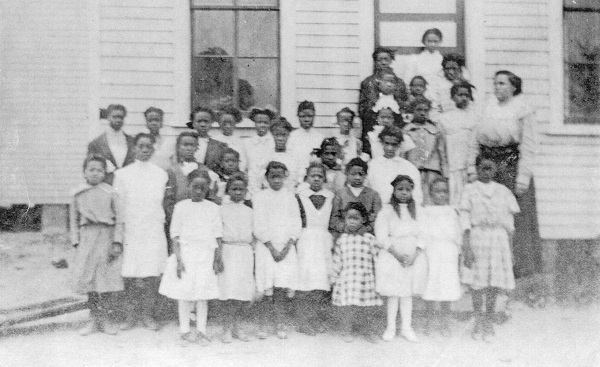 The Cary Colored School (year 1900) from the Delaney Collection at St Augustine’s College.

“Ministers would come and sit on his porch and listen to him,” Jimmy said. “He didn’t speak much, but if he spoke, you didn’t want to miss it.”

There’s a lot of rich history people don’t know about that was started right here in Cary. My great-grandfather (we called him “Papa”) used Cary as a base to do all of his work around the county – he lived in Cary but constantly traveled to preach outside of the Cary area. In Cary, he was known for counseling and marrying. Everyone who wanted to get married came to him.

“My great-grandmother was a music teacher, and she played in church,” Jimmy continued. “She counseled young women and was just as active as a missionary as Papa was, but she let him forge to the front like women did back then in both the white and the black societies.”

A lot of people came through Cary during that time, and Rev. Meadows taught a lot of them. People have approached Jimmy just to tell him that they were “Papa’s” students.

“I think my great-grandfather was selected for bigger things,” Jimmy said. He wanted to reach everyone, not just those in Cary. In fact, people would follow him around from town to town each week as he traveled, taught and preached.

He was a dynamic preacher. He was very calming – neither him nor my grandfather screamed or yelled. My grandfathers always preached assurance – that we would see Christ again – and I think that’s where most preachers mess up. You come to church because you’ve had a hard week, so you want to hear words of assurance – that God loves you and cares for you.

Jimmy ended our talk by telling me about all the students his grandfather helped. “When you went to the colored schools, you were taught from secondhand books, and you had to make the best of it,” Jimmy said. “Papa worked with people who weren’t highly educated, people who worked in small farming communities, and he had to make sure that they were going to make it.”

He was determined that he and Mama were going to do it. And those kids passed with a very high success rate. No child was left behind on Papa’s plan.

Interview by Jessica Patrick. Photos from the Page-Walker archives.