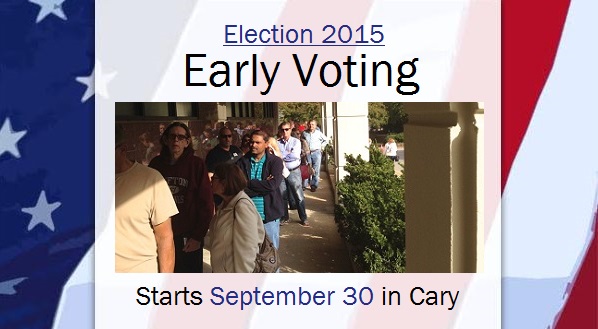 Cary, NC — Election day is less than two weeks away, and early voting starts in Cary on Wednesday, September 30, 2015. Here’s everything you need to know.

This year’s election is a Town of Cary Municipal Election. Both Mayor Weinbrecht and At-Large Town Council Member Lori Bush are running unopposed for reelection to their current spots.

Four new candidates are running for the vacant District D seat on Cary Town Council. This seat, which represents the southwest portion of Cary, was formerly held by Gale Adcock, who is now representing Cary in the North Carolina General Assembly.

Two new candidates are running against incumbent Don Frantz for the District B seat, which represents Downtown Cary and its surrounding areas.

You can read about the new and returning candidates in our Candidate 2015 series.

You can also vote early in Raleigh starting today, September 24, 2015, at the Board of Elections Office, 337 S. Salisbury Street in Downtown Raleigh.

See the times and dates for Raleigh voting.

Do you want to vote but feel uninformed about the candidates?

As we’ve done in the past, CaryCitizen has been publishing responses to our Candidate Questionnaire. We asked all the candidate(s) running for Mayor, At-Large, District B and District D seats on Cary Town Council the same three questions:

All nine candidates responded this year – you can learn more about them in their own words (we simply copied and pasted their answers) in our Candidate 2015 series.