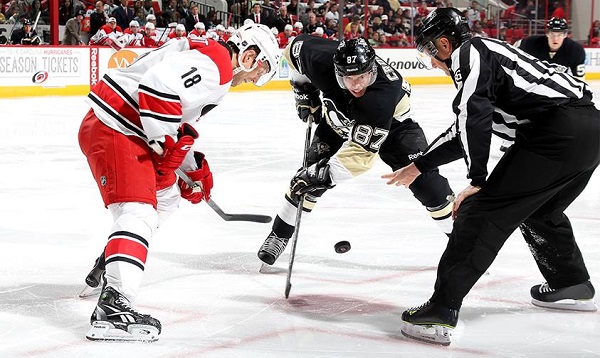 Raleigh, NC — The Carolina Hurricanes closed out their 2015 preseason with a solid 2-1 win over the stacked Pittsburgh Penguins on Friday, October 2 at the PNC Arena.

Former Penguins Jordan Staal and James Wisniewski scored for the Canes, as both teams had what will probably be their lineups come opening night.

Ward Rebounds for a Great Performance

The Penguins had a 7-3 blowout win over the Canes 10 days ago, so this was sweet revenge for the Hurricanes. During that first game, which was their first home game, the Penguins had most of their veterans in the lineup whereas the Canes went with the NHL preseason minimum number of veterans. Nonetheless, the Canes and Cam Ward did not have a good game.

Friday night was totally different. Ward was not only sharp, he was outstanding. While the Canes’ defense on the ice was young, meaning that it lacked a great deal of NHL experience, D-Coach Steve Smith has done some amazing things with this squad. Whenever a Penguin would get in the dirty area of the crease, the Canes’ defense would clear them out from in front of Ward.

Newcomer James Wisniewski plays a lot bigger than his 5”11” frame. Wisniewski has earned a reputation for taking the body as well as anyone, and his positioning was excellent. Tack on his bomb of a shot and kudos go out to GM Ron Francis for this addition.

Late in the first, Wisniewski sent one of his bombs that Marc-Andre Fleury sent to the side boards. Nathan Gerbe jumped on the puck and out=muscled his defender then sent the puck along the boards to JStaal behind the net.  Staal came around the net going wide then flung the puck just inside the far post for 1-0 Cane lead.

Second Starts to Get Nasty

The second period was nothing short of mid-season play as the checking got tighter, the hits came faster and harder and both goalies were very sharp.

After a penalty-free first, the penalties, especially for the Canes, started. First, Elias Lindholm got called for kneeing, which will be reviewed by the league.

The penalty was not intentional, and, fortunately, Daniel Sprong was able to resume play after having it checked out. Wisniewski got a total of six minutes in the box in the second – first for an elbow then a double minor for a high stick. Coach Bill Peters must believe in Noah Hanifin, as he played a good amount on the man down situation.

Early in the third, Eric Staal brought the puck up over the Penguins’ blue line then passed to Chris Terry on the right. Terry collected the puck, waited patiently for an opening and sent a snap shot to the far side top corner. The puck glanced off Wisniewski’s sweater giving him credit for the goal but the set up was all Terry’s. The Pens’ closed the gap on a goal by Pascal Dupuis.

Ward made an initial pad save off a shot by Brian Dumoulin, but Dupuis was there for the backhander up high past Ward.

The third period saw the teams settling down again except for the offsetting roughing minors to Michal Jordan and David Perron just over midway in the period. The Canes put the emphasis on defense as the Penguins were giving it all they had. Their top line seemed to be on the ice every other shift throwing as much rubber at Ward as they could. The Canes only got off five shots in the third, but none of the Caniacs in attendance cared. As the saying goes – if they’re keeping score, you might as well win, and win the Canes did with a satisfying 2-1 win.

After starting the preseason 0-2, they ended up strong winning four straight games for the first time as the Carolina Hurricanes, preseason, regular season or playoffs. Great way to go into the start of the season and hopefully wipe of the O’fer October memories of last year.

The first home game is this Saturday night, October 10, 2015. Several CaryCitizen.com readers will be attending as part of the 3-for-1 deal we offered a while back.

Be on the lookout for CaryCitizen.com to be on the Jumbotron!