Raleigh, NC — The Carolina Hurricanes lost their first home game of the regular season to the Detroit Red Wings at the PNC Arena on Saturday, October 10, 2015.

The Canes lost to the Detroit Red Wings 4-3 in front of a SRO (standing room only) crowd of over 18,900 fans. After a poor start in the Season Opener in Nashville, the Canes came out very aggressive and got 10 shots before the Wings got their first.

There was no doubt that Coach Bill Peters’ game plan was to have every shift go 100% from the first minute, and the players responded.

The Canes’ aggressiveness on and off the puck paid off early, as, at the 1:37 mark, Teemu Pulkkinen got caught hooking Jeff Skinner, sending the Canes on their first of nine power plays.

Just over a minute later, Riley Nash was interfered along the boards, drawing another penalty and giving the Canes a 5-on-3 for 46 seconds. One of the NHL myths that stopping a 5-on-3 leads to a win came true. The Canes not only scored, but Nash suffered an injury that knocked him out of the game. The Canes had another powerplay late in the period and, again, failed to score. What was impressive, though, was the possession in the offensive zone.

The Canes were pouncing on the rebounds, keeping the puck moving and constantly having someone in-front of the crease at all times.

The Wings struck first, about midway in the second, on a play that initially started out innocently, as the Wings were on a line change. Dylan Larkin carried the puck into the Canes’ end along the boards then dumped it down low for Henrik Zetterberg.

Zetterberg gathered the puck in the corner then, with Jordan Staal all over him, made a power move around JStaal, sliding the puck under Ward’s right pads for a 1-0 lead. Less than four minutes later, the Canes would tie it up with two of the youngest Canes getting involved.

Noah Hanifin hopped over the boards to start a shift, catching the puck from clearing the blue line. Hanifin took a couple of strides and, with the puck on edge, shot the puck.

The shot went high, bouncing off the top of the net, but Victor Rask batted the puck in midair into the net to time the game. Less than four minutes later, Ryan Murphy (who was on the right point) deeked around a Wing up high then calmly went low to send a sharp pass cross-ice to the tape of Nathan Gerbe. Gerbe directed the puck into the net for a Cane 2-1 lead.

Early in the third, the Wings dumped the puck down low. The Canes had the puck well covered, as Ron Hainsey tryed to move the puck away from the checking forwards to send it to the sweet spot in the crease directly to Teemu Pulkkinen.

Pulkkinen was all alone in front of Ward and put it top-shelf to tie the game. 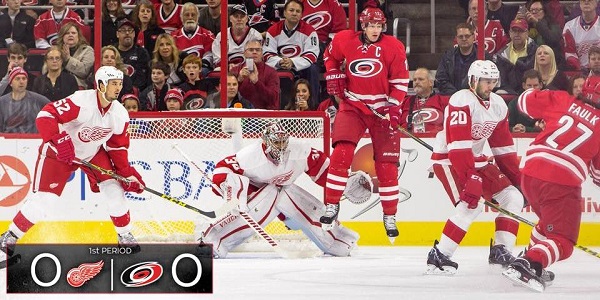 Just under two minutes later, Pulkkinen struck again on a tip-in from 12 feet out as Ward was screened. Late in the period, Zetterberg put on a possession show behind the Cane’s net that was a back breaker. After two Canes couldn’t take the puck away, Zetterberg sent it to Justin Abdelkader, who was all alone for what turned out to be the game-winning goal.

With just 20 seconds left in the game, John Michael Liles caught a stick in the mouth, drawing a four minute penalty. Justin Faulk sent a bomb in with two seconds left to close out the scoring for a 4-3 Cane loss. In a one-on-one CaryCitizen, one high-ranking Canes front office person said, “You have to respect the effort and intensity, but we need to win these games.”

One can only believe that a similar message will be given by Peters to the team. The emphasis has to be aggressiveness leads to shots, and shots will lead to scoring.

The next home game is Tuesday, October 13, 2015 against the Florida Panthers.

Guide to Donuts in Cary