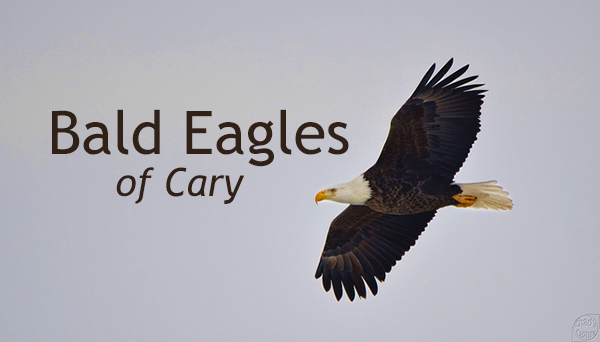 Editor’s Note: It’s a breathtaking sight to watch a large eagle soar over roads or lakes, and, lately, we’ve seen quite a few eagles during our commutes. Jessica, our assistant editor, recently saw two bald eagles fly over Lake Crabtree in Morrisville in a span of only two weeks.

We consulted our friend and bird-watching expert, David Lindquist, to learn why, where and when you can see bald eagles (fairly easily!) right here in Cary.

Cary, NC — In Cary, we can enjoy the recent arrival of Bald Eagles. They’re flourishing on our lakes and ponds, and the exhilarating sight of them can make our days. It’s now easy for Cary residents to drive or walk a modest distance and see eagles soaring in our skies.

The Wonder of Eagles

In the Peter Jackson films dramatizing the works of J.R.R. Tolkien, some of the most dramatic scenes involve the arrival of huge eagles, who save the day…

Bald Eagles had been driven to extinction in places like the Piedmont by a buildup of DDT (a colorless, tasteless and almost odorless organochloride known for its insecticidal properties) in their bodies, causing nest failures. As recently as 1983, there wasn’t a single Bald Eagle to be seen in this area. The good news is that population relocation efforts buttressed by the protection of the Endangered Species Act have turned the tide.

From a stock of eagles released in Hyde County over 30 years ago, there are now over 125 known nest sites across the state of North Carolina and dozens locally. 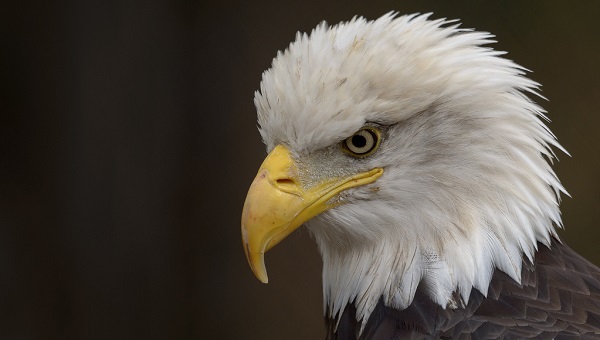 How To Find Them

Bald Eagles are found near water because their primary food choices are fish. They’re quite capable of fishing for themselves, but they’re also opportunists who won’t turn down a scavenged dead fish or a steal from other predators.

They’re also known to hunt for live prey including waterfowl, snakes and small mammals. Eagles nest very near water in high points of trees by building nests from branches and other bits of wood. Nests are often reused, and known nest sites can be checked for years.

In our area, odds of seeing eagles are best at the edge of larger lakes, but, if you are patient, any good-sized pond or lake can see eagle activity. You can see one any month of the year (although they are a little more commonly seen in summer).

Bald Eagles are most active in the early morning hours, typically between sunrise and mid-morning. You’ll have more success on cold mornings and sunny days. It is possible to see them afternoons and windy days but they will be more likely to be soaring and not feeding.

Bald Eagles are very large. They are the largest birds of prey seen in our area commonly, typically 5-10 inches longer than the common Turkey Vultures we often see gliding in the skies.

Eagles will be just as dark underneath but will flap their wings a little more often and hold their wings flat like a board. Don’t always count on the iconic white head! Those “bald” heads are the hallmark of birds of 3-4 years of age or older. Eagles can be identified by their large size (much larger than hawks), heavy body, large head and long, hooked bill.

Do be sensitive to eagles. They are easily startled and disturbed if found perched on a limb or in their nests. Remember that Bald Eagles are protected by law from harassment and injury with penalties ranging from steep fines to jail time.

Keep An Eye Out

The next time you’re near a lake, keep an eye out, especially along the edges of the water. You never know when you might find yourself shouting, “The eagles! The eagles!”

Read more about birds in Cary.