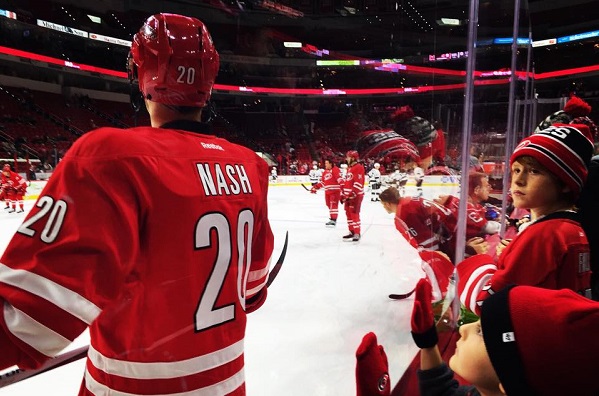 Raleigh, NC — The Carolina Hurricanes lost to the Toronto Maple Leafs last Friday at the PNA Arena, but they redeemed themselves on Sunday afternoon with a 4-3 win against the Los Angeles Kings. Here’s an overview of both home games.

It had to get bad before it got good again. The Canes lost their fifth game in a row (2-1) to the Toronto Maple Leafs on Friday, November 20, 2015 in their first shoot-out of the season.

Slow Start for the Canes

The Canes’ history in shootouts isn’t stellar, and this shootout was, somewhat, a microcosm of the game. With Bill Peters’ expression, the Canes didn’t start the game on time, and the Leafs were the better team during the first five minutes of the game.

It’s not that they had many shots, but Toronto had the puck in the Canes’ end for nearly six minutes before the Canes woke up. In the shootout, Toronto scored on their first shot whereas the Canes’ Riley Nash scored in the must-score-or-lose third slot to keep the Canes’ hope alive.

Back to the game, after the Canes finally started, they did what they do best and played a possession game. The Canes outshot the Leafs 12-8 in the first, and the quality of their shots was the best in the past three or four games.

Both goalies, Cam Ward and the Leaf’s James Reimer, made great saves and gave up few rebounds. One thing frequently missing was a big-body Cane forward in front of the net. 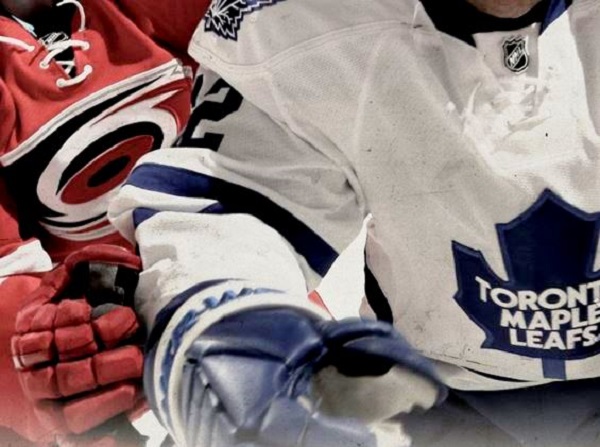 Brad Malone was in the line-up for the first time in many games after being a healthy scratch. He made his presence known. Malone can play a physical game and brought his A-game tonight. It’s no question that he was trying to make every Leaf feel his shoulder on one side, and the boards on the other, as he checked anything in a white and blue uniform.

The men in the white and black uniforms didn’t think he was doing every check in a legal way and called him for two penalties, but the Canes’ man-down unit had his back and thwarted any attack. When both teams had full squads on the ice, it seemed the Canes’ fourth line of Malone-Jay McClement-Nathan Gerbe and third line of Jeff Skinner-Victor Rask-Joakim Nordstrom were the better lines for the Canes. Granted, the top lines of the Canes were against the top lines of the Leafs, but neither top lines have been up to their billings this whole season.

That’s a major reason both teams are cellar dwellers in their divisions.

The first tally of the game came when John-Michael Lyles carried the puck into the Leafs’ end, down the left side, and passed over to Justin Faulk. Faulk had the puck high with Brad Malone going along the boards to the low-right corner. Malone didn’t see a teammate in the crease, so he sent a hard pass that bounced off Reimer’s pad into the net for a 1-0 Cane lead.

Bugsy will certainly say that’s what he meant to do, even when he was behind the goal line. The Caniacs sensed a win, but the Leafs started to turn up their offense.

On a face-off in the Leafs’ end, Elias Lindholm fell to the ice and pushed the puck with his glove – a penalty – but it hit his stick, so no penalty. The refs huddled to determine if it was a penalty or not, and they decided wrong and sent Lindholm to the sin bin.

During a TV timeout, while the Leafs were on the powerplay, a group of Leaf fans started a Let’s Go Leafs cheer that several players acknowledged. Whether or not that inspired the Leafs, the Leafs scored shortly after the ensuing face-off to tie the game, sending it into overtime.

The Carolina Hurricanes ended their five-game losing streak in a big way with a solid 4-3 win over the Los Angeles Kings on a Sunday, November 22, 2015 afternoon game at the PNC Arena. The Canes started ‘on time” and had plenty of hits, a decent amount of shots and even engaged in their first major fight of the year.

Early in the first, after Jay McClement was chased from the ensuing face-off, Brad Malone stepped in for the face-off. Malone used his strength to win the puck back for Brett Pesce on the right point. Pesce held the puck while skating backwards to the high slot inside the blue line, sending a hard slap shot that cleanly beat Jonathan Quick for his first NHL and a 1-0 Cane lead.

Late in the period, Nathan Gerbe dumped the puck into the Kings’ end from the blue line. Gerbe used his speed to get around the defense to be first to the puck just before 6’2″ Kyle Clifford checked 5’5” Gerbe into the boards on what appeared to be a high hit of a forearm to Gerbe’s head. Malone took exception to the hit and immediately went after Clifford. Standing up for a teammate on top of his play in the last game will go a long way with both coaches and players.

Early in the second period, Riley Nash won a face-off with Kris Versteeg getting the puck then quickly passing up to Pesce on the right point. Pesce’s only option was to send the puck hard along the boards. Jeff Skinner was camped out at the right side of the goal and quickly picked up the puck and made a finesse shot into the top-near side for a 2-0 Cane lead.

Just 2 1/2 minutes later, the Canes had the breaks going their way, as they had a full two minutes of a 5-on-3. Last game, the Canes squandered a 5-on-3, and the NHL omen turned out to be true as they lost. Here, they scored on the 5-on-3 and won. The Canes were quickly moving the puck at will when Elias Lindholm took a shot from the far goal line.

The puck bounced out, but Justin Faulk was there for the rebound, settling the puck before wristing a shot stick-side with good traffic in from screening Quick. The Kings’ first goal was on a penalty shot after the refs made what turned out to be a bad call. They said Noah Hanifin put his hand on the puck in the crease, but replays showed it was Ward’s glove, which is perfectly legal.

Less than a minute later, on what appeared to be a routine zone clear, Faulk either made a bad decision or didn’t see Anze Kopitar on a cross-ice clear. Kopitar snared the puck then sent a wrister past Ward to close the gap 3-2. Late in the period, the Canes had another power play that was crucial, as the momentum was turning in the Kings’ favor.

Score on this power play, and the momentum shifts back to the Canes, so all eyes were on Faulk. Faulk responded by sending a hard slap-shot to the goal but was blocked by a body in the crease. Call it karma for the bad call on Hanifin, but Dustin Brown kicks in in the goal instead of clearing with Hanifin, getting the primary assist. Faulk leads the NHL in PP goals with eight.

The Kings scored on that power play, getting the game back to a one-goal game. The Canes did not go in a defensive shell but continued to attack. So much so that the Kings were only able to pull the goalie with just about a minute left. Their coach, the entertaining and innovative Darryl Sutter, has been known to pull goalies with several minutes remaining.

The Caniacs let the team know the moment Quick left the ice, as it was an atmosphere the PNC Arena hasn’t experienced in a few weeks. With 18 seconds left Jordan Staal, was called for a penalty, but the man-down defense was outstanding for those 18 seconds as the Canes frustrated the Kings on every touch of the puck.

Great game, great win with one bad outcome – it looks like Gerbe may be out of the lineup for a while. Everyone agrees, he’s the team’s spark plug and leader of hard work on the ice.

The next home game is Wednesday, November 25, 2015 against the Oilers. Be there!

The Best Places to Watch Airplanes