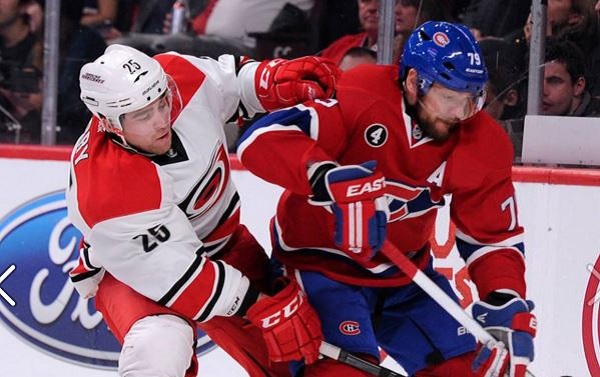 Raleigh, NC — Here’s a recap of the three Canes home games that were all played at the PNC Arena last week on Thursday, December 3 – Sunday, December 6, 2015.

The Canes played like heck but lost 5-1 to the New Jersey Devils last Thursday.

The Devils have been the biggest surprise in the NHL this year. They were pegged to be in the bottom tier of teams but, instead, are right on the cusp of a coveted playoff spot. Whether it was that the Canes didn’t think the Devils’ early success was an indication of how good they are or that the Canes just played badly for most of the game, the Devils drew their pitch forks.

The Canes didn’t start the game on time, and the Devils had the early edge – the extra step in the ice, better shots, finished checks and better forechecking. They took the Caniacs out of the game early. Victor Rask got called for a slash early, but the Canes were able to fend off the Devils’ attack. Brad ‘Bugsy’ Malone was one bright spot for the Canes for the whole game. 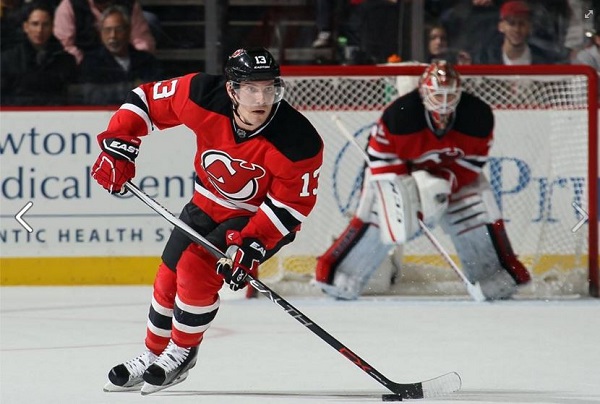 In the second, the Devils scored two goals close to one another midway in the period after Jeff Skinner got called for a four-minute high sticking penalty. The Devil scored with one second remaining in the first two minute segment and then scored just after Skinner got back on the ice.

With the fourth line digging hard, Bugsy gave the Canes life late in the period. Jay McClement was along the half boards in the Devils’ end, passing over to Bugsy Malone in the mid-area of the slot. Bugsy did a one-timer through traffic that found the back of the net getting the Canes on the board. The Devils answered with another goal late in the period that all but sealed the game.

The Canes tried an attack in the third, but the Devils never let up on playing a strong offensive game. The Canes tried to play a more physical game, which is not only not their style – they’re not that good at it. Their strength is puck possession, good passing and strong body position with the puck, and very few Canes need to be dropping the gloves and expect a positive outcome.

Justin Faulk and Ron Hainsey were both in altercations, and it was good to see some spunk and possibly the release of frustration. The Canes couldn’t get any more shots in the net but did hit the posts twice in the period. The Devils punctuated the win with a goal at the 12:47 mark, with many of the Caniacs vocally expressing their frustration and disappointment in the Canes’ play.

The Saturday, December 5, 2015 game against the Montreal Canadiens saw the largest crowd at the PNC Arena than had been there in several games. Those in attendance saw, first-hand, a very exciting game that was more or less even on the ice.

Needing something to wake up the team, Canes management brought up three players from Charlotte while sitting two seasoned veterans and sending Ryan Murphy back to Charlotte. Up from the Checkers were Jaccob Slavin, Brock McGinn and Phil Di Giuseppe, who was the fifth player from Charlotte to make his NHL debut with the Canes this season.

All three had excellent games and did what they were supposed to do – bring high energy, speed and, like any call-up, an effort to give management a hard decision to send them back. DiGiuseppe was on fire, as it seemed he was hitting anything in a white sweater.

He did get called for charging on one penalty that, by the definition of the rule book, he was guilty by leaving the ice on a hit – all by ¼ of an inch. Not to ref-bash, but singling out this one hit when far worse happens multiple times in every game seemed a little ticky-tacky.

Like DiGiuseppe, Canadien Daniel Carr was also in his first NHL game. Carr, with the same intensity as the Checker call-ups, was fast on the ice early in the first, grabbing the puck on the right side behind the goal and using his speed to get his first NHL goal on a very rare wrap around on Cam Ward. With the Canes on their first powerplay, Jordan Staal muscled the puck behind the net, passing up to Jeff Skinner who was camped out on the left post.

Skinner caught the puck on his backhand and pulled it back to put a forehand shot to the top inside of the net just as the power play ended for a very pretty and skillful goal.

Mike Condon made a pad save off an Elias Lindholm shot that came to EStaal. Staal had about 20 of the 24 square feet of net that was completely open, skating hard to the puck, took a shot only to have the puck bounce over his stick. Midway in the period, Ward was beat on a shot by Sven Andrighetto, who was left all alone on Ward’s doorstep. Count that as two breakdowns by the Canes in the game and two goals by Montreal.

A short while later, Ron Hainsey took a shot from the left point with Condon. Andrej Nestrasil picked up the loose puck and then sent a backhander to the goal. Condon again couldn’t control the rebound, but Joakim Nordstrom was in the dirty area of the crease and corralled the puck, stretching his stick out and around Condon’s pads to shovel the puck in for his first goal as a Cane. That goal brought back memories of Chad Larose, who made a living scoring like that.

The third period was worth the price of admission.

Just 14 seconds into the period, EStaal was pushed onto the ice in the crease behind Condon with the puck just in front of Staal after the puck hit Staal in the chest. With the puck on the ice, Staal swiped at it just as it crossed the goal line. The ref immediately called it a good goal.

The four officials huddled and called it a goal. They went upstairs to the goal video room and agreed it was a goal. The Canadian coach used his challenge, so the review was sent to the NHL video from in Canada who called it goalie interference. No way! Call it sour grapes, but that was a goal. Frustration #2 for Staal.

Later in the period, EStaal had a shot that hit the pipe. Frustration #3, then, just a few seconds later on the same shift, Staal finessed a shot behind Condon for a sure goal, but Condon made a desperation swipe in the air behind him, connecting with the puck for a highlight save.

Frustration #4 for Staal. Call it Karma for Staal, as a few minutes later he was was tripped by a stupid penalty in the Habs’ end. The Canes won the face-off back to John-Michael Liles who slid the puck quickly over to Brett Pesce. Pesce sent a one-timer slap shot at the goal, and Skinny again camped out on the corner of the crease, batted the rebound in midair into the net for the Canes first lead of the game. Staal will take those four frustrations for a winning a game any day.

Less than 24 hours later, the Canes hosted the Arizona Coyotes in a game that was less than pretty for both teams as it was filled with mistakes all around, including the refs. At the end, the Canes made one less mistake and pulled out a 5-4 victory that saw the lead change a few times.

For the second game in a row, Cam Ward gave up an early goal that was a combination of the lack of defensive coverage and out of positioning by Ward. After Ward made a save off a shot from the point, Tobias Rieder didn’t have a defender within 10 feet of him. With Ward sliding wide off the goal, he would have been rude if he didn’t thank the Canes for such southern hospitality. 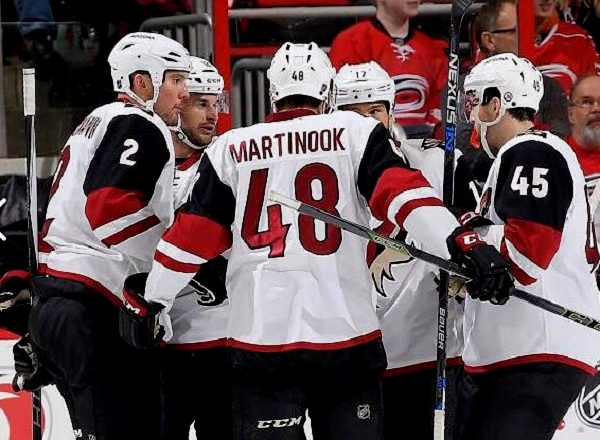 The Canes answered the goal by bearing down on their forecheck and started taking bodies. Elias Lindholm brought the puck into the Coyotes’ end then left a drop pass behind Eric Staal, but Kris Versteeg was able to gather the puck and in one motion and did a turn-around, sending the puck under Andres Lindback’s pads to tie the game.

Late in the period, Brad Richardson had the puck and charged the net from the face-off circle. With the defense collapsing on him, Richardson sent a nice pass cross ice to Nicklas Grossmann who put the puck in the net for a 2-1 Coyote lead.

The Canes answered less than two minutes later. Rookie Noah Hanifin, who is getting better every game, had the puck deep in the Canes’ zone and was skating circles around forecheckers, did some nifty stick work in the neutral zone then dumped the puck deep.

Jay McClemment chased the puck with speed and grit, gaining control to the back right of the goal line, faked right went left for a wrap around that Lindback blocked by McClemment slapped the rebound in to tie the game 2-2.

The only score of the second was a thing of beauty, making a scoring chance out of nothing. Lindholm grabbed a redirected shot just outside the left faceoff circle. Lindy settled the puck waiting for friends, and the friends came. Versteeg charged the net but had a defenseman hanging on his back, so Lindy waited for EStaal to follow in the mid slot then made a perfect pass that Staal shot hard into the net for his first goal in 15 games, giving the Canes their first lead.

Early in the third, Ward was off the post and let another goal in that he, no doubt, would want back. Later in the period, Versteeg was knocked down, the rules call that interference, and when on the ice did his US Marine impersonation and grabbed the puck and put it under him waiting for the refs to blow the whistle for a Cane powerplay.

The call was on Steeger for closing his hand on the puck which the mild manner Steeger was quite vocal in advising it was the wrong call. The Coyotes scored on the powerplay to go up 4-3 with just over six minutes remaining. The Canes answered again with the entire team digging for that extra energy needed late in the game.

Ron Hainsey joined on a rush and picked up a loose puck wristing a shot high glove side to tie the game, looking more like a forward than a defenseman.

Less than a minute later, Bugsy Malone got called for a questionable hooking call when, on the same play, Jeff Skinner had his stick knocked 20 feet into the air without a call.

The Canes were doing a good job of thwarting the powerplay when John-Michael Liles got a stick in the face thus evening up the sides at four apiece. With two seconds left on the shortened Canes powerplay, Justin Faulk scored his NHL leading 9th powerplay goal to give the Canes a 5-4 victory. Answering last is always best.

The next home game for the Canes is Friday, December 18, 2015 against the Florida Panthers. Great seats are still available. Be there! 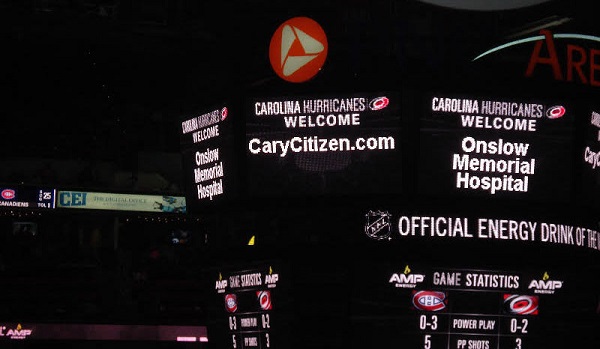 Thanks to Bob, CaryCitizen made the JumboTron!

Apologies for Wednesday’s game being a little late to ‘press’, but I do have a great excuse: I was at the hospital welcoming the newest Cary resident in this world – my first grandson, Owen Byron Fennel was born early Saturday morning, December 5, 2015.

His parents are my son Jeff and his beautiful wife Mary. Stay tuned to the CaryCitizen.com in about 20 years on this sports page for the Canes. They might just have a local player!