Raleigh, NC — The Carolina Hurricanes needed a solid game, and they got it with a 4-1 win over the Columbus Blue Jackets on January 8, 2016 in front of another good Friday night crowd. The Canes had just returned from a short two-game road trip to western Canada, coming away with just one point when both games were winnable.

The Blue Jackets are currently the worst team in the NHL, and they just made a blockbuster trade by trading who was, arguably, their best player. Ryan Johansen, who was traded for Nashville’s Seth Jones, is just in his third year but is a very impressive player. This was Jones’ first game for the Jackets, and he is a beast.

The son of a former NBA player, he’s 6’4”, 208 pounds, strong as an ox and has a cannon of a shot. The Jackets came out as the stronger team, maybe because the recent trade sent the message that anyone can be traded, or because their coach, the controversial and lively John  ‘Torts’ Tortorella, had them better prepared along with his pregame instruction.

Jordan Staal Tips in the First

The Canes’ young defensive corps did an excellent job of keeping bodies away from the dirty area in front of Cam Ward, and, when the Jackets got off shots on goal, Ward was sharp with pad saves, blocker saves, an active stick and burying shots for no rebounds. Late in the period, the Canes got their first of four power plays, and the Caniacs could sense something good was going to come out of the man advantage.

The Canes had excellent puck possession, and the entire power play got off three quick shots. After the Jackets barely cleared the puck out of their zone, Kris Versteeg carried the puck back into the O-zone along the right wing. When he got down low inside the face-off circle, he passed to Jacoob Slavin on the right point. Slavin wasted no time sending a hard slap shot to the goal. Jordan Staal was camped out in front with a defender on his back. Staal had the right position, knocking Slavin’s shot in mid-air to change direction, giving Anton Forsberg no chance for a save and resulting in a Cane 1-0 lead. 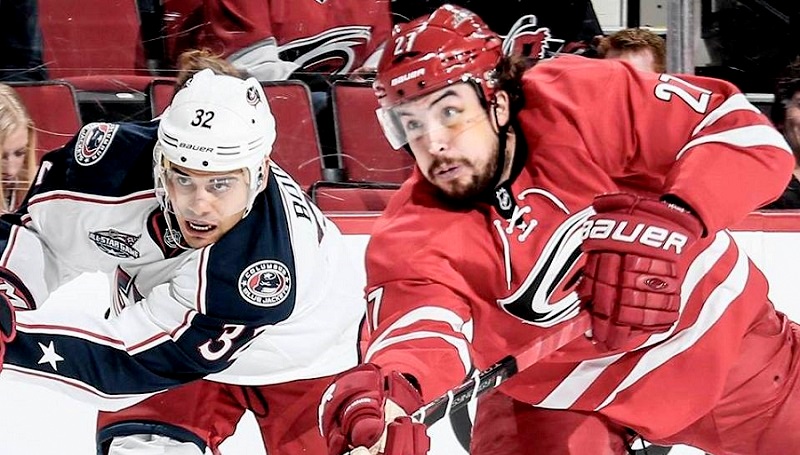 The Canes took control of the game midway in the first period, and that continued in the second for as much as they could without the mental errors. The Canes found themselves on the wrong side of a long five-on-three but were doing a good job from allowing shots. With about 10 seconds remaining on the two-man advantage, Brandon Dubinsky was to Ward’s left then made a pass to Brandon Saad, who was anchored on Ward’s right.

The pass hit John-Michael Liles’ skate and went in to tie the game. Liles is flat out snakebit, as he has to lead the NHL on pucks on his own goals off his skates, shin pads, back, arms or anything.

In the game against the Devils (the week after Christmas), all three Devils’ goals were off Canes’ defensemen. Just under the 15-minute mark, after a face-off in the Canes’ end, the puck went all the way to the Jackets’ end. Defenseman Cody Goloubef did a double mistake, which Torts would certainly remind the young defender.

He didn’t make a strong clear around the back boards, and he also didn’t realize Steeger’s speed. Steeger snared the puck, sending it up to Noah Hanifin on the left point. Hanifin sent a slap shot towards the goal with Elias Lindholm doing the tipping of the puck this time. Lindy was about 15’ in front of the crease and tipped the puck down hard sending a bouncer in for the Canes’ second goal that turned out to be the game winner.

Give the Jackets credit, as they came out in the third with a sense of urgency which the Canes had to respect and, more importantly, counter. Last week, they beat the top two teams in the NHL, so they have the potential to be dangerous. They are the most penalized team in the NHL, with over twice as many penalty minutes as the Canes, who have the least penalty minutes. A Torts team will never be the least penalized team.

Midway in the third, Jeff Skinner took the puck into the Jackets’ end and went deep with Chris Terry on the left and just one defender in the middle. Skinny faked a shot, which the defender bought and slid along the ice.

Skinny stopped on a dime, sending a nice pass to Terry – who shot –  but Forsberg made a save andTerry hit the puck out of the air into the net for a nice second attempt goal that all but sealed the Canes’ win. With Forsberg on the bench allowing the Jackets an extra skater, Eric Staal got control of the puck in the Canes’ end. Staal brought the puck into center ice, drawing the defense like a magnet. Staal could have had a shot at the empty net but unselfishly sent the puck cross-ice to Lindy who, with a defender on his side, was able to send a meaningful shot into the goal for the final score of 4-1.

The next home game is Tuesday, January 12, 2016 against Pittsburgh. If the Powerball winning ticket is in my pocket, all CaryCitizen readers will get free tickets to every Canes game for the rest of the season.