Raleigh, NC — The Carolina Hurricanes dominated the Calgary Flames in a 5-2 win on Sunday, January 24, 2016 at the PNC Arena. Kris Versteeg led the way with two goals, and Elais Lindholm set a franchaise record as the youngest player to score on a penalty shot.

Unlike the previous game against the Rangers, the Canes all “started on time” as Coach Bill Peters would say. The team got off three solid shots in the first two minutes, challenging goalie Karri Ramo on every shot.

Victor Rask opened the scoring just two minutes and 26 seconds into the contest. After a pass from Jeff Skinner, Rask worked hard along the far half boards and cut to the middle. Then, with Lindholm creating a screen in the dirty area of the crease, he sent a wrister through the traffic for the 1-0 Canes lead they would never give up.

Late in the period, Lindy got a head-man pass in the neutral zone then used his size and speed to go towards the goal. Just as he was shooting, he was hooked from behind with the ref awarding Lindy his first penalty shot of his career. Lindy’s penalty shot was very impressive – all business and coming in at quarter speed.

He selected a corner then sent a powerful shot stick side for a 2-0 Canes lead.

Steeger Makes It on Key Passes

Kris Versteeg had his first of the night early in the second after two great passes. The first was from the hardest passer on the team, Ron Hainsey, deep in his own end on a “Hail Mary” pass to Eric Staal at the Flames’ blue line. Staal entered the zone but had the defense collapsing in front of him. He stopped at the left face-off circle then sent a beautiful saucer pass to Steeger on the left wing, who sent in a one-timer for a solid 3-0 Canes lead. 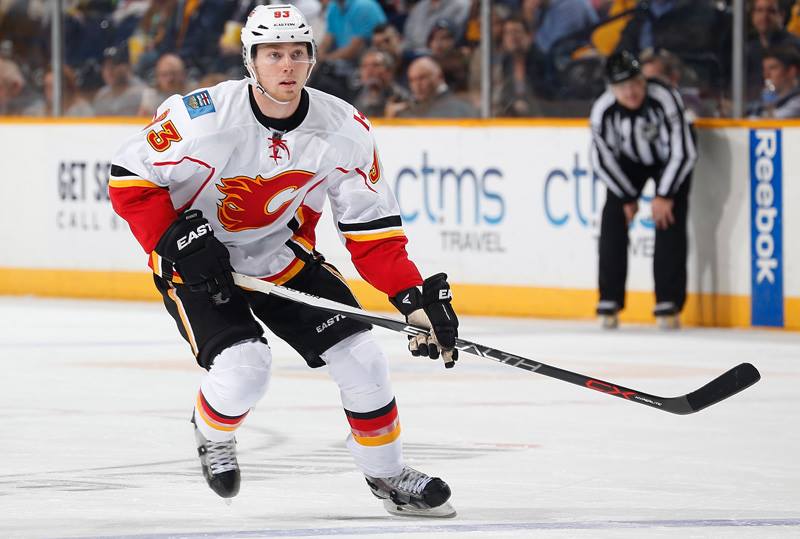 The Flames tried to make a game of it, closing the gap about eight minutes later when Jiri Hudler scored off a pass from Mark Giordano after a mental breakdown by the Canes’ defense.

Early in the third, the Flames scored again just under the four minute mark when Joe Colborne was able to get one by Eddie Lack. The Canes continued to keep the pressure on and were clearly the better team on the ice that night. Play in the third started to get a little chippy, with the refs calling four penalties when, many times, refs forget they have whistles in most third periods. Skinner was taken down on a semi-breakaway that could have been the second penalty shot of the night but ended up a Canes’ powerplay instead. Steeger converted on the powerplay by digging on a save off a Skinner shot.

Flames’ Coach Bob Hartley – who is, in my opinion, one of the better NHL coaches – challenged the goal, but the goal was upheld. The second line for the Canes closed out the scoring with Joakim Nordstrom tallying on a pass from Jordan Staal via Andrej Nestrasil.

I had a one-on-one interview with former-Cane Erik Cole before the game. Cole was traded last season at the trade deadline from the Dallas Stars to the Detroit Red Wings. Cole injured his back late in the season and is still under medical care but looks like he could lace them up and help the Canes in the scoring department. He still lives in the area, as he calls Raleigh home, and he still thinks of the Canes organization as his hockey home.

He does plan on participating in the 10th Anniversary Celebration of the Canes’ Stanley Cup win next month.  Don’t be surprised if you hear more about Erik come next September. And remember – you read it first on CaryCitizen!