Cary, NC — Brew n’ Que is definitely a “hidden gem.” Located in a small strip mall near the corner of High House Road and Maynard, the restaurant is a place for homemade barbecue and sides made by an owner who really cares about quality.

Brew n’ Que got its start as a food truck. Even before that, though, “Big Mike” was just a guy who loved to barbecue. “I’d barbecue at home in a terra cotta flower pot with a hot plate and burnt wood chips,” he told me. “I’d cook for events at my church or to hold fundraisers for my friends.” People loved it and told me I should sell it.

At first, Mike wasn’t convinced. Though he’d always wanted to open a place of his own, he had no restaurant experience. Finally, a friend asked him, “If money wasn’t a factor, what would you love to do?” Mike’s answer was easy – he’d barbecue. With a five year-old son and both himself and his wife working full-time, life was already crazy, but he hated working behind a computer. “I wanted to make a change,” Mike said. “So I finally went for it.”

Mike’s plan was to open a restaurant, but he was overwhelmed when he learned what that would cost to get started. He found a man in Clayton that would let him use his food truck, which was all ready to go. “He let me borrow it for a year to see how I liked it,” Mike said. “That was really cool, because it was very much a test trial.”

The test trial was a success. The community quickly fell in love with Mike’s homemade, farm-to-table pork, chicken and sides. “When I first got started, I would prepare all the food in my church’s kitchen,” Mike told me. “Finally, they told me that I was there more than the head pastor and that I’d need to get my own space.”

Paige and Tom, the owners of the Great Harvest Bread Co. next door, told Mike about the current Brew n’ Que space. It took six months, but, when Mike opened the doors, he finally had a spot to prepare the pork and other meats himself. 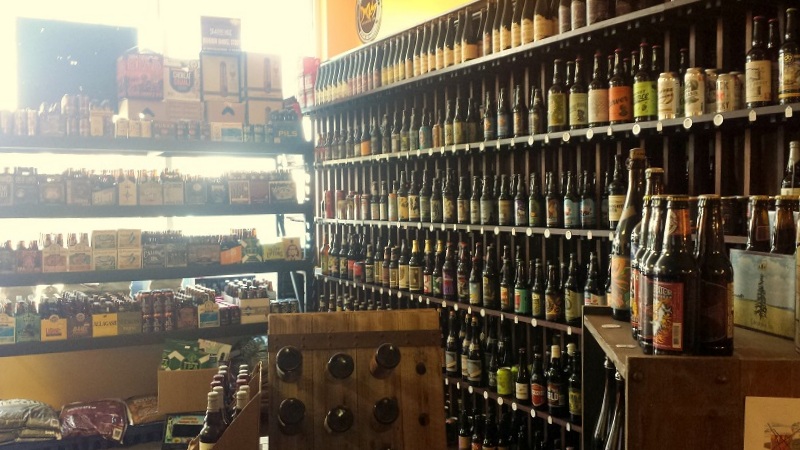 You can buy local craft beer on-tap, in bottles or in growlers at Brew n’ Que.

Another exciting opportunity the brick and mortar spot gave him was the chance to fulfill his dream of having a bottle shop. “We’d take the food truck to breweries and craft beer shops, and, for the first three years I was in business, I really wanted to have my own beer shop with the food truck,” Mike explained.

Owning Brew n’ Que is hard work, Mike said, but he loves it. The space is small, warm and inviting – it’s the kind of place where you’ll get to know the owner and staff. With three picnic tables and 10 bar seats, seating is limited, but the place is a popular spot for lunch and on weekends. “I’m excited to tell people that we have a good thing going here,” Mike told me.

“We put a real heavy focus on having really good food and farm-to-table barbecue. We buy organic and local for everything we can. It’s one of those things I’m committed to.” 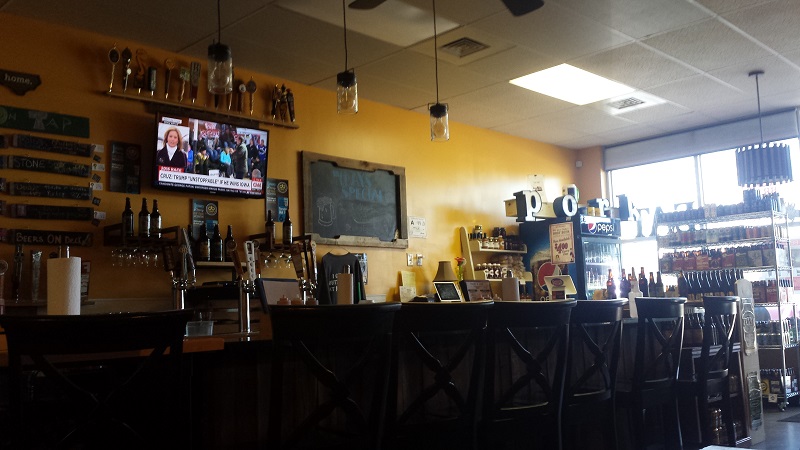 Mike told me that a lot of people will stop in after work to pick up a home-cooked meal for family dinners. “You can bring your kids in here and know that everything is made from scratch except the mayonnaise and ketchup,” Mike joked.

Mike’s story is cool, but it’s his passion for his food that really stands out. After placing a serving of “Piggy Mac,” a Brew n’ Que bestseller, in front of me, Mike told me about all his favorite dishes – and how they were invented.

The Piggy Mac, which I tried, is a generous serving of homemade macaroni and cheese topped with pork and salt and vinegar chips. I added to mine some of Mike’s delicious sweet and tangy barbecue sauce. “Our collards and kale are popular,” Mike said,” and we also make our own Brunswick stew, baked beans and smoked potato salad.”

Mike isn’t kidding when he says that everything is made from scratch. His baked beans start out as raw beans, and his smoked potato salad is served warm. “I don’t like cold potato salad, so we crisp the potatoes that go into it,” Mike said.

Not much goes to waste at Brew n’ Que, either. Mike makes his own meat stock by boiling the meat bones and skin with vegetables. “Little things like that make a big difference,” he said. The leftover pork and chicken go into another one of his bestsellers – shredded meat egg rolls filled with collards, buffalo sauce, blue cheese, peppers and more. A lot of Mike’s menu items are inspired by the flavor combinations he sees on Food Network, which he loves to watch. 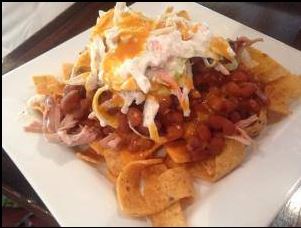 Other mouthwatering menu favorites are the Redneck Nachos – Fritos topped with pork, blue cheese, baked beans, cole slaw, sweet vinegar and hot mustard. “That started at a church event,” Mike laughed. “We had bought those variety packs of chips, and everybody had taken all the other chips but no one took the Fritos, so I found something to do with them.”

The Big Cheesy is another crowdpleaser – the buns are basically two grilled pimento cheese sandwiches filled with macaroni, barbecue, sweet pickles and barbecue sauce. Mike makes his own cornbread, but the rest of his bread – like hamburger buns and the white bread he uses for the Big Cheesy – comes from next door. “Great Harvest Bread has the best bread, and Paige and Tom are personal friends,” Mike said.

The newest item on the Brue n’ Que menu is the bakery’s salted caramel brownie.

“Eventually, we’ll have homemade ice cream to serve on top of the brownie,” Mike said. “But right now I’m always busy – being in the food industry is tough. I’m either with the kids or I’m working, but this isn’t really work because I love what I do.”

Brew n’ Que offers lunch, dinner, eat-in, takeout, catering for events and more. You can visit the restaurant at 1222 NW Maynard Road in Cary. Hours are Monday-Saturday from 11 am – 9 pm.