Cary, NC — This week, two cancellations in Cary have highlighted protest against HB2. One was a show by Ringo Starr; the other was 250 jobs from Deutsche Bank.

House Bill 2, also known as HB2 or the “bathroom bill,” was enacted by a special session of the North Carolina General Assembly and signed by Governor McCrory on March 23, 2016. Its passage has caused an uproar across the state, the nation and internationally.

The legislation was crafted to counter an ordinance by the Charlotte City Council barring discrimination and accommodating transgender bathroom use.

Across North Carolina, HB2 has drawn passionate support, but even more passionate opposition.

HB2 has had a polarizing effect across the state.

Supporters of the legislation say it protects public safety and is in response to a radical action by the Charlotte City Council.

Opponents say it is discriminatory and legislative overreach.

The business backlash has been fierce. Miramax, Fox and Lionsgate have all cancelled film production plans in Wilmington. Paypal has changed its mind about a 400 person global operations center in Charlotte. Google, Facebook and Apple have all spoken out against HB2. 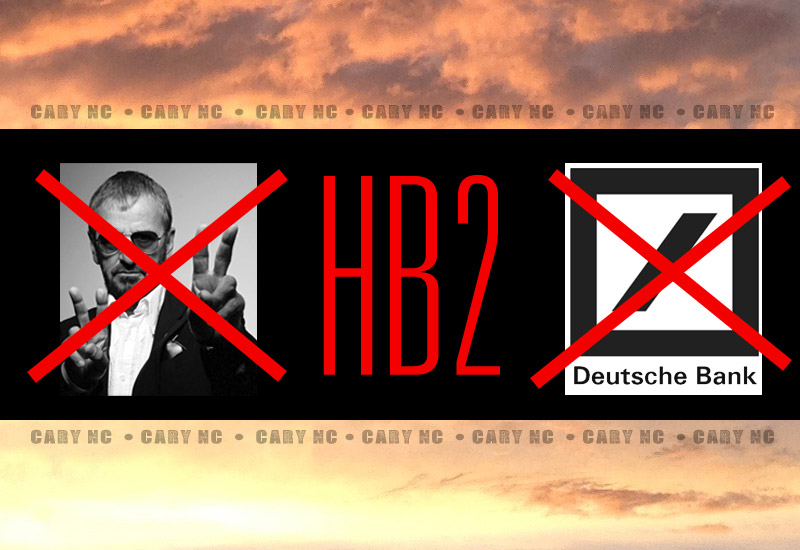 The fallout from HB2 did not take long to reach Cary. Earlier this week, Deutsche Bank announced it was freezing plans to add 250 jobs in Cary.

Read the statement from Deutsche Bank.

Today, Ringo Starr cancelled his upcoming show at Booth Amphitheatre. ““I’m sorry to disappoint my fans in the area, but we need to take a stand against this hatred,” Starr said in a statement.

Read the statement from Ringo Starr