Cary, NC — Raleigh Swimming Association (RSA) swimmer Cothalee Watko has been chosen by USA Swimming to be among the 48 female and 24 male up-and-coming athletes in the United States selected to participate in USA Swimming’s 10th annual National Diversity Select Camp to be held May 5-8, 2016, at the U.S. Olympic Training Center in Colorado Springs.

“I am humbled and very excited to have been selected as one of the 24 male athletes to participate in this prestigious national select camp,” said Cothalee Watko.

“It is with great pride and pleasure that I will represent my state, my team, my school and the Latino community at this camp.”

The purpose of the camp is to instill a vision of success and inspire athletes from ethnically under-represented populations to become leaders in the sport of swimming. Swimmers nationwide are invited to the highly competitive three-day camp, which includes pool training, motivational and education sessions and team-building activities. 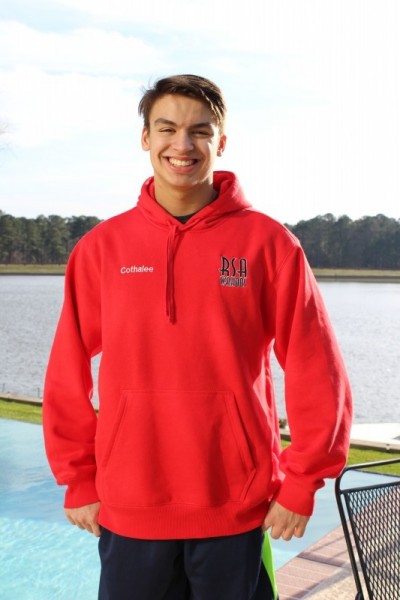 “RSA is extremely proud that Cothalee has been invited to participate in this nationally recognized camp,” said Brent St. Pierre, RSA Head Coach. “Cothalee takes tremendous pride in his swimming, but, more importantly, in his family.”

St. Pierre added that, “All of us [at RSA] are very happy that USA Swimming is giving talented young athletes the opportunity to showcase their swimming talents while recognizing that families and communities are instrumental to the success of athletes like Watko.”

Like many kids, Cothalee Watko began his swimming career, at the age of six, swimming for his neighborhood summer league swim team in Lochmere.

He has been swimming year-round since a very early age and has been an RSA swimmer since 2010. He swims in the RSA Senior practice group and for the Cardinal Gibbons High School swim team, where he is currently a sophomore.

The camp hosts swimmers between the ages 14 and 16, and selection is based on times swum at USA Swimming sanctioned events.

The goal of USA Swimming’s National Diversity Select Camp is to:

The swim program at RSA began in 1960 and is the oldest swimming association in the Triangle. In 2013, the group purchased the former Candler Swim Club. After extensive renovations, they renamed the facility William H. Sonner Aquatic Facility in honor of RSA’s founder and first coach. They have swum there since June 2014.