Cary, NC — AT&T users in Cary have been without phone, internet or TV, in some cases for 36 hours. That’s bad news in Tech Town.

Remember a time before internet, cable and cell phones? Many customers of AT&T in Cary have been thrust back into that era with a massive outage affecting cell phones, TV and web access.

“I would very much like to know what the cause of the outage in Cary NC is,” said Theresa Jones this morning on DownDetector.  “It’s coming up on the 36 hour mark for me. 27513 zip code.”

“No service in Morrisville NC since at least 5pm 4/13/16,” commented Faye Scott. 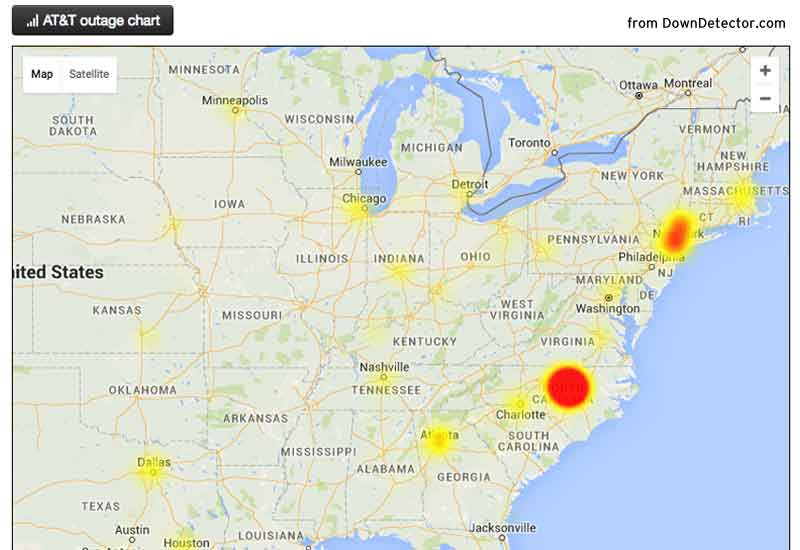 “I just spoke to an AT&T repairmen I saw on the street. He says main fiber to the area has been cut but they have not been able to determine the exact location of the cut. They are still looking. Ugh.” – Bob Klaus via DownDetector.

Other commenters are demanding a refund.  “We requested a refund and were told it would be on our next bill…we shall see,” said Susan Lamb-Tonnemacher.

CaryCitizen’s Matt Young has been without service for 20 hours. “We’ve all become very dependent on cell service, the internet and TV,” he said. “People have been texting me all day because that seems to be working. But we are in a state of disaster as far as the information we expect to get and juggle all day. People are panicking.”

“Due to a fiber cut in Cary, some of our customers in the Triangle area may be experiencing issues with wireless and wireline services. Restoring service is our top priority and we are working to repair the damage as soon as possible. We apologize for this inconvenience.”

As of Saturday morning, April 16, 2016, service has been substantially restored throughout the Triangle.