Cary, NC – While all of the bus systems in the Triangle area are connected, many people are unaware and do not know about transfers between nearby cities. But a new area-wide effort is changing the names of buses to be more clear, including Cary’s C-Tran.

All of the bus systems, from Raleigh to Durham to Cary and more, are part of one network so people can move throughout the state with ease. But Ray Boylston, Cary’s transit services administrator, said this does not get widely communicated.

“All transit systems are linked. We’ve been working together closely for years and it’s good to show that,” Boylston said.

So, starting Saturday, October 1, 2016, Cary’s C-Tran will change into GoCary, with a new logo and design.

“We ran studies and found it would be advantageous to show that even though they are independently operated, the transit systems are part on a larger network,” Boylston said. “And it makes it easy for people who are out of town and would not otherwise know.”

Now Cary’s buses will have the GoCary name and include the same multi-triangle design with Cary’s own distinctive blue-and-green color scheme. Similarly, Durham’s bus system will be GoDurham and regional buses are GoTriangle, all part of a larger Go Transit family. The only system not changing its name is Chapel Hill’s.

“Transfers between systems have always been working smoothly and now hopefully we can get more people to see for themselves,” Boylston said.

Also, Boylston said the buses themselves will mostly be new, with a new contract kicking in on the same day. All but two of the buses in GoCary will be brand new. 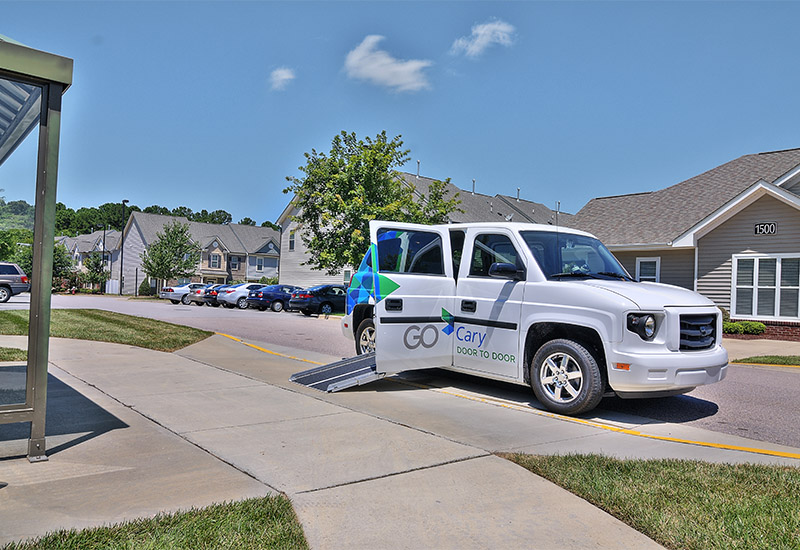 Getting New People On Board

GoCary has six fixed routes running through the town and also offers door-to-door service for disabled and elderly residents to get transportation. And in the first week of the GoCary name change, from Saturday, October 1 to Saturday, October 8, 2016 Boylston said all fixed routes will be free to passengers.

“It’s primarily because we have to integrate new technology into the buses,” he said.

The new technology is the GoCary app, which will give people information about where and when buses will be arriving and also give the drivers some guidance. Because this is new technology and may not work at first, Boylston said people will not be charged for the rides in the event delays are created.

“It’s also a great way to give people who have not tried the transit system to get on board,” he said.

These changes come at the same time that Wake County is planning on larger improvements and changes to the transit system, with the issue up for a vote in the November election.