Cary, NC – Your Carolina Hurricanes will be the youngest team in the NHL this season and whether it’s the team of prospects or the NHL team, their early performances has been very positive.

The prospects were once again in the preseason tournament in Detroit and came away with the top prize going undefeated in the four-game format.  When was the last time a Cane team on any level averaged five goals a game! The young guns lived up to their fanfare as a run and shoot team as well as speed in all zones. The talent, along with a touch of coaching by Ulf Samuelsson, was impressive. Samuelsson, a long time teammate of GM Ron Francis, was a talented and gritty player and like Francis left it all on the ice every shift. If he coaches like he played, the future is only going to get brighter for the Canes for a long time. 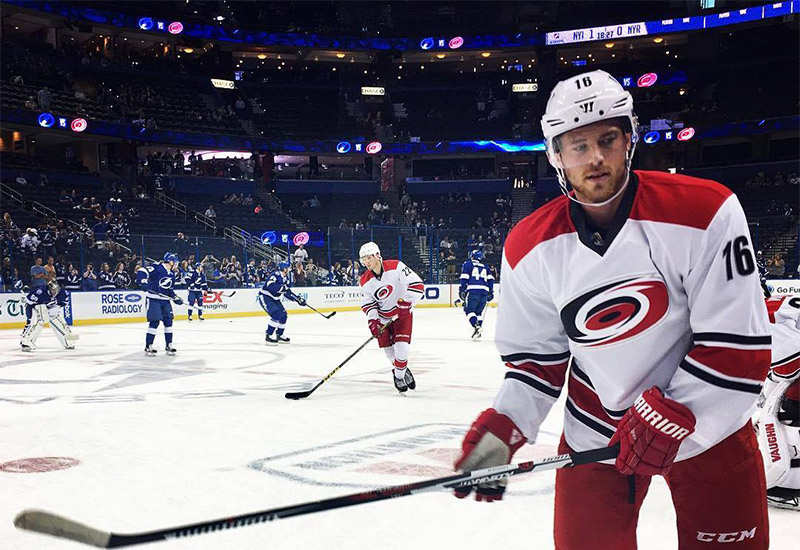 Don’t tell a player preseason games don’t mean much. These guys are professional athletes and getting to this level means they don’t like to lose. There are roster spots open and while there may be names penciled in, most pencils still have erasers.

The Canes won their first two preseason games on the road with Eddie Lack in the first game and Cam Ward in the second. The coaches have the NHL goalies playing the first two periods in each game then an AHL keeper taking over for the third period.  Both Lack and Ward played solid in their initial starts with each not allowing a goal. That’s not only a credit to them but a credit to the defense. In each of the first two games, there wasn’t a defenseman over 25 years old.

The Canes had their first home preseason game on Friday, September 30, 2016 with several CaryCitizen readers taking advantage of the 3-for-1 game special in attendance. The Canes lost to Tampa Bay 2-1 in overtime in a game that had a slow start. Tampa nearly owned the neutral zone early as the Canes couldn’t muster any offensive possession from their d-zone into the Bolts end. The Canes had half the team of prospects while the Bolts staffed just about their NHL roster. Both teams showed their speed with the Canes getting better as the game went on. The Bolts scored an early goal on a wrister from 20 feet that was a wake up call on the Canes bench. After that goal, it seemed the Canes stepped up their play a little.

The Canes played their traditional disciplined game with just one penalty. Late in the game with the Canes on a four-minute man advantage, Jeff Skinner back handed the puck from the door step into the back of the net to send the game into OT. The Canes couldn’t convert the extra man in the early overtime so after that it was speed against speed. After the Canes had all three skaters deep in the Bolts zone, the puck was kicked out to the Bolt’s blue line. Ondrej Palat picked up the loose change and on a breakaway beat goalie Michael Leighton for the win.

The Canes will make further cuts this week and Friday night’s game, their last home preseason game, should be close to what their NHL roster may be. Tickets are still available.