Cary, NC – As the Winter weather comes in, many of us start to think about heating, electricity and all of the bills that come with it. But one local resident has designed and built a house with optimal solar efficiency in mind. And best of all, he gets to live in it.

John Argentati said he has been interested in solar energy since high school and always thought having a house designed to make use of the sun’s natural heat would be a cool thing to do. Argentati moved to the area in 1990 from Massachusetts, and in 1997, Argentati bought an empty lot of land and decided to finally design that solar house.

“I picked land that had a lot of southern exposure so it could take advantage of the sun,” Argentati said. 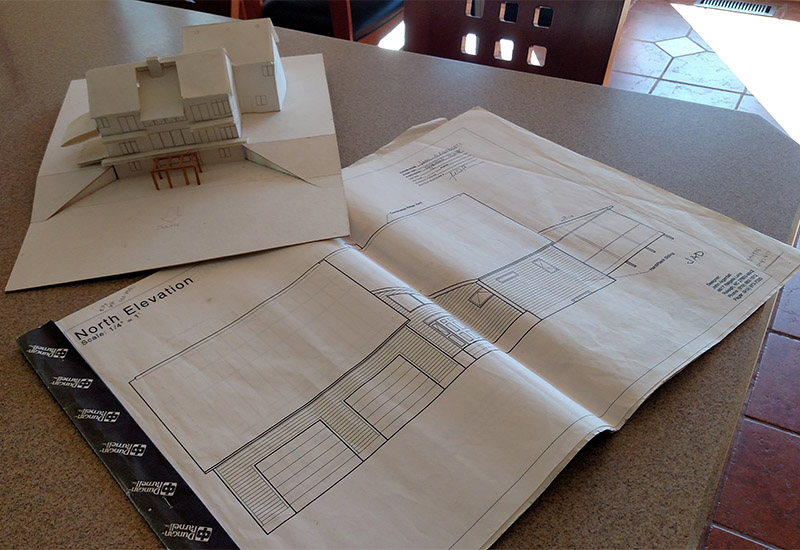 While Argentati is not an architect – his background is in software and electrical engineering – he started the design and construction process in 1998 and finished the house in 1999, focusing on sustainable technology and design the whole time. One of the house’s main attributes is the way it uses sunlight for heating. On the southern side of the house, there are numerous large windows and many of them lead into a large sun room with stone walls that have a high thermal mass to trap the heat.

“The whole house wraps around the sun room and uses the sunlight to heat the house,” Argentati said.

Most of the rooms in the house have a window at the top that can be opened to let the rising hot air inside. Based on the time of year or the temperature, the windows are closed or opened to trap the heat or let it escape. Another part of this design are the balconies and awnings on the southern face of the house to block the sun when it’s higher during the Summer, thus cooling the house. 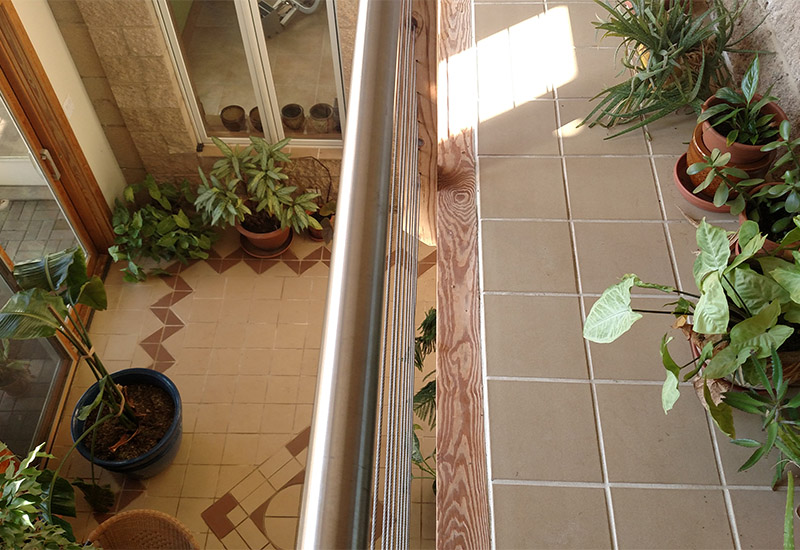 Also, Argentati tries to keep things such as bathrooms and closets on the northern side of the house to block against cold North winds and because closets don’t need to be warm for living.

Argentati calls this passive solar design, passive because it essentially runs itself and there aren’t multiple moving parts involved.

“And since it doesn’t require much technology, it’s insanely reliable,” he said. “It doesn’t break down.”

To generate more heat, there’s a large soap stone fireplace in the middle of Argentati’s house that is hollowed out with chambers to circulate the heat inside and radiate it out. 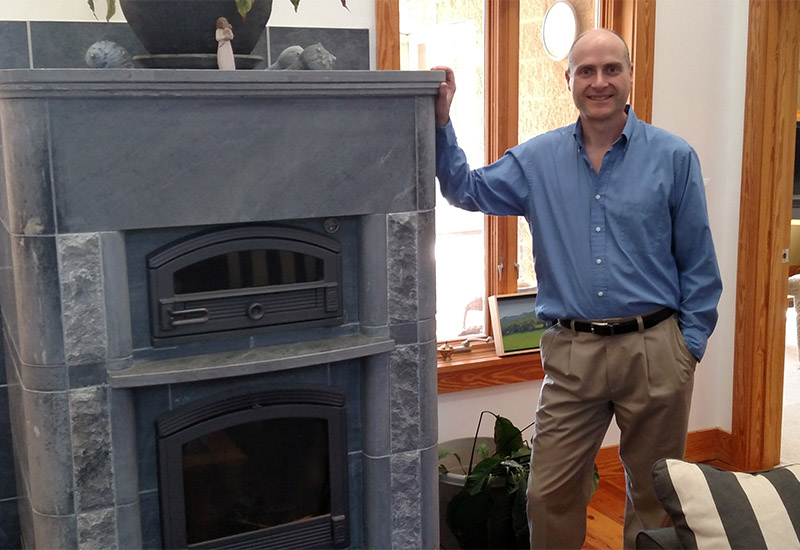 “In most fireplaces, most of the heat escapes in the chimney,” he said. “Here, we can light a fire for three hours in the morning and in the night and it will stay radiating heat all day.”

The attention to heat storage and efficiency extended to the beginnings of the house’s design. Argentati did it himself, even going as far as to make a paper 3D model and include framing elevations in the plans, and built the rooms in four foot increments since most lumber comes in units of four and this would generate less waste. But one other touch Argentati added was using two-by-six boards in the walls instead of two-by-fours.

“This makes them thicker so you can fit in more than 50 percent more insulation,” he said.

And sticking with Argentati’s focus on renewable and low-waste design, the insulation is made with used newspaper and boric acid. 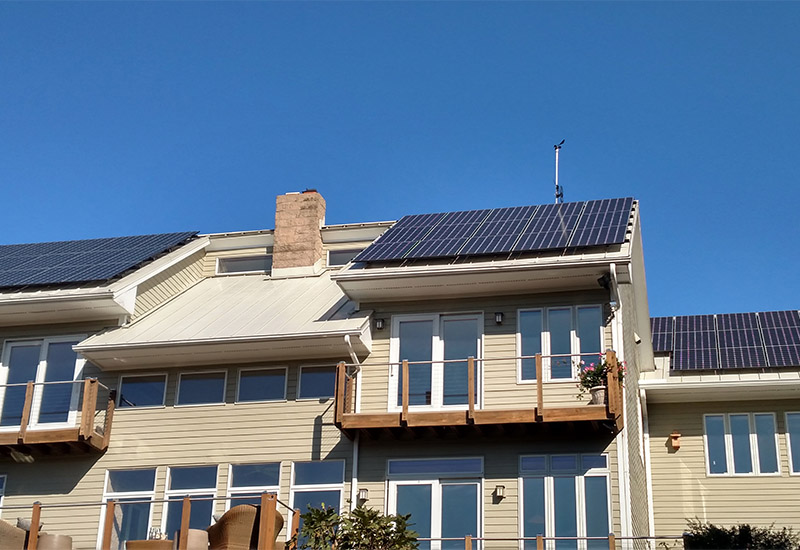 New to the house since last year, Argentati now has more than 40 solar panels on the roof of his house, generating 12 kilowatts of power at peak production. During the day, these panels often generate more power than the house uses and Duke Energy uses that electricity and compensates Argentati by lowering their rates for electricity used at night.

“It mostly cancels out and sometimes we’ll have a power bill of $9,” he said.

Over the years, Argentati said solar panels and other photovoltaics are getting less expensive as manufacturing improves.

“We’re near a point where photovoltaics are cheaper than coal-fired plants. And at that point, it won’t make sense to stick with coal and oil,” he said.

Not only does Argentati see a lower power bill thanks to his solar panels but his passive solar design heating drastically cuts down on his bills, more than 70 percent.

A chart of Argentati’s energy usage and generation on an average day.

Another advantage is Argentati said he can be independent from the electricity companies. During Hurricane Matthew, when many in Argentati’s neighborhood and around Wake County lost power, he could keep his appliances and computer working as long as the sun was shining.

Collectively, all of this design, from the windows and sunroom to the solar panels to other feature such as an aquaponic greenhouse, recycled wood floors and a compost pile, mean Argentati and his family use fewer materials and electricity and that means a lot to him.

“We care about the environment. This way, we’re not contributing to global climate change,” he said. 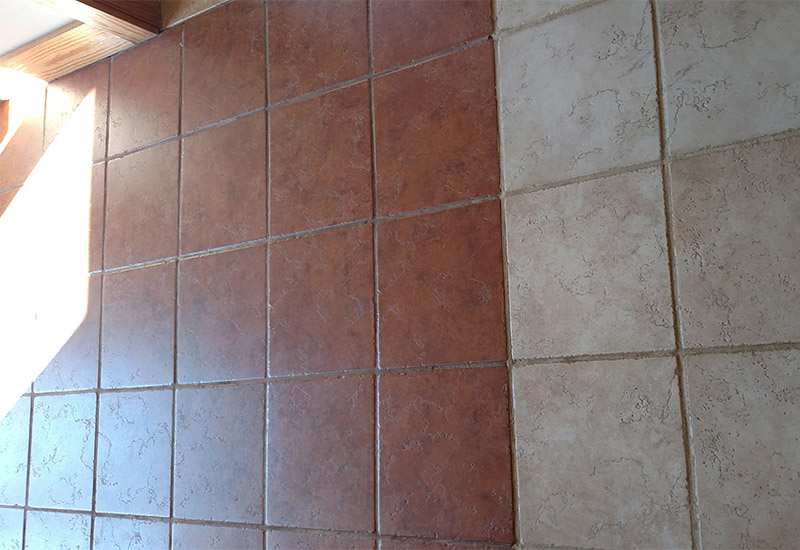 As part of the passive design, darker bricks are closer to the window to trap heat.

Not everyone is going to be able to build a new house specifically designed to harness solar energy but Argentati had some advice for homeowners to save money on their bills through these same design principles. He advised getting a local solar engineer to check out and assess your house to see if it’s right for solar panels and other photovoltaics.

“If it faces north or it has a lot of trees around it, it won’t work,” he said.

But otherwise, the quickest fixes Argentati proposed was improving insulation and air fixing to find gaps where air could escape or leak inside, specifically using “honeycomb blinds” in front of windows to best seal in heat.

“The next thing is switching to energy-efficient appliances,” he said, giving examples of items from refrigerators to lightbulbs. “There’s no question they save money.” 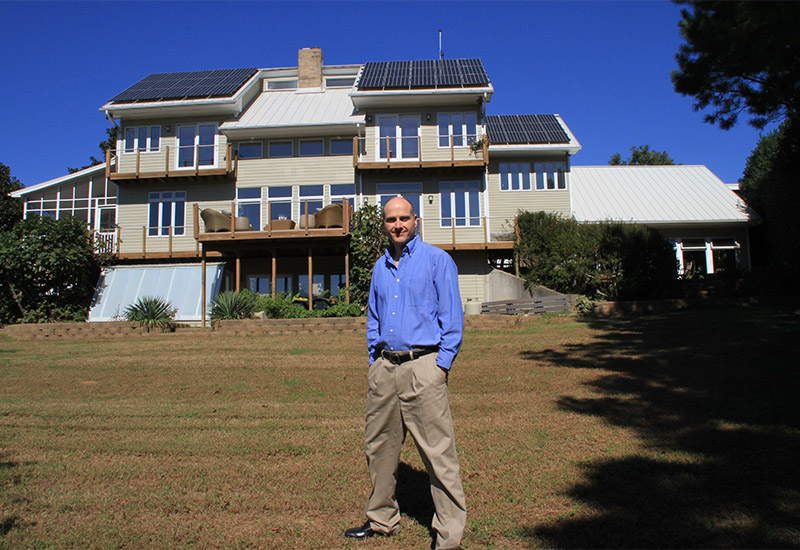