Cary, NC – The Carolina Hurricanes started a 5 game home stand on the losing end of a 4-2 loss to the Anaheim Ducks on Thursday, November 10 at the PNC Arena before a very sparse crowd.

The Canes need to step up their game big time as they’re currently tied for the lowest points in the NHL and are in the lead for the top draft pick next year. The Canes would gladly change that status for making the playoffs this year. 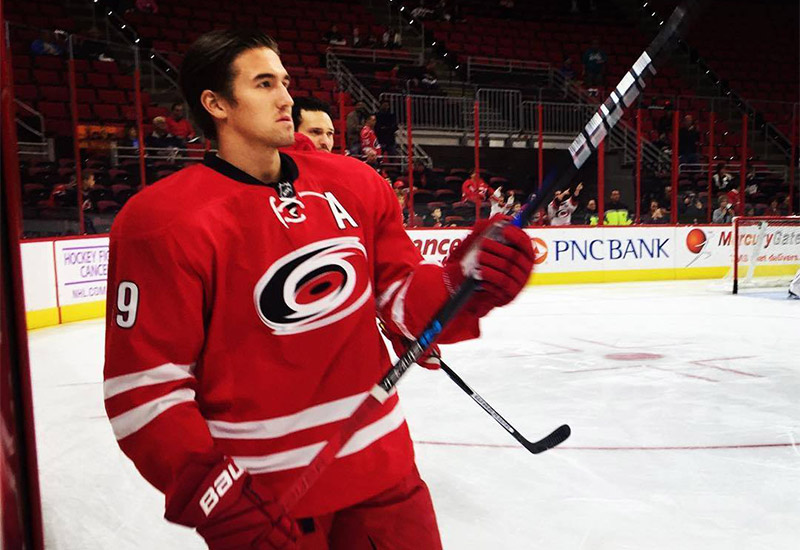 While the Ducks played in an OT loss the night before in Columbus, both teams played even up in the first. Anaheim is a team with plenty of big bodies and many of those big bodies have plenty of talent and an attitude on the ice. They are one of the better teams that will do whatever it takes to get their opponent off their game – trash talking during a face off, trash talking skating side by side, trash talking during a line change, a cheap shot here and there, a small grab on the sweater behind the play – anything to get under an opponent’s skin.

The Canes had the first powerplay and did everything but put the puck in the net. Movement was good, possession was good, shots were good and at one point the puck was within inches of crossing the line but the Canes were held scoreless. The next powerplay went to the Ducks and the penalty kill, one of the bright spots for the Canes so far, was equally good thwarting the Ducks. The forechecking  by the forwards was very good, notably Jay McClement and Jordan Staal were awesome. The young defensemen were solid and Cam Ward was a wall in net and made several acrobatic saves.

Ducks Were Flying in the Second

The second period saw the ice titled in the Ducks favor as they cashed in on three goals. Putting the third defensive pairing against the top Duck forward line resulted in two of the three goals.

With having the home ice advantage of line changes, that type of match-up shouldn’t happen even once. Especially when the forwards have 25 pounds and six inches on the defender.  Late in the period, Sebastian Aho snared the puck from a faceoff, passed up to Jaccob Slavin at the left point. Slavin sent the puck towards the net with Teuvo Teravainen making a sweet touch to redirect the puck in from 12 feet out to close the gap 3-1 and instill life into the Canes.

The Canes needed to come out in the third as the more aggressive team that did so by turning up the heat mostly on their forechecking. Jeff Skinner was behind the net with two defenders all over him like a cheap sweater but somehow he managed to make a saucer pass right to the tape on Victor Rask’s stick who sent a quick wrister in the upper left corner from six feet out to give the Caniacs something to cheer about.

Skinner was targeted all night with cheap shots and anything to get him off his game. Good news is he held his temper, bad news is someone on the Canes needs to police that and have a firm response to send a message but that didn’t happen. The Canes were feverishly trying to tie the game and with a little over two minutes pulled Ward for the extra skater.

During a stoppage, as Ward went back to the net, Coach Bill Peters pulled a slick move when he requested a goalie change. The Canes rested while Eddie Lack was getting his gear on and all Lack did was stand 25 feet out of the net then as soon as the puck dropped, made a bee line to the bench. The Ducks added an empty netter to seal the game 4-2 with 26 seconds left.

Next game is Saturday, November 12 against Washington. Be There!