Cary, NC – Cary’s Town Council worked into the late hours of the night as several big issues went before them, from the Cary Community Plan to the Eastern Gateway to the proposed homes next to Green Hope High School.

The agenda item that took up the most of the Thursday, November 10, 2016 meeting was the Cary Community Plan. This comprehensive plan has been in the works since 2012 and lays out how Cary will develop into 2040. This was a public hearing so community members had the opportunity to give their comments on the plan, with Town Council initially scheduled to vote on it in January 2017.

More than a dozen people spoke on the Cary Community Plan. Many people, from the Cary Chamber of Commerce to the Committee for the Future to local residents and property owners, spoke favorably about the plan for reasons such as wildlife and historical site preservation and creating a good climate for businesses and families.

Many of those who spoke, while they said they liked the plan in general, brought issues before the Town Council as well. One speakers wanted better clarification about what goes into areas zoned as non-residential, another wanted their property designated as mixed use instead of commercial/industrial and one was concerned that boundaries were not being adjusted as the plan moved some pieces around. 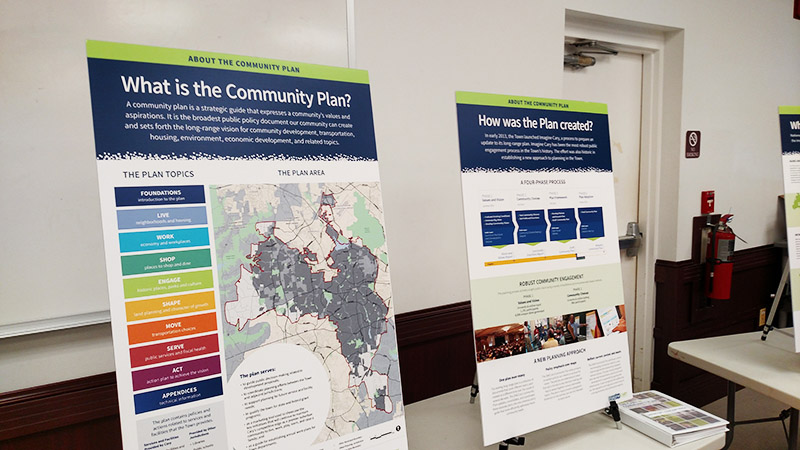 But the one concern that was brought up the most was about roads. Many members of the Sree Venkateswara Temple community complained about the proposal to expand Chapel Hill Road, which passes in front of the temple, will be expanded to six lanes and hinder their growth. Temple members throughout the audience stood up to show their numbers. Also, two residents spoke out about roads proposed to cut through private property.

“We ran out of time when it came to talking about the map,” said Mayor Pro Tem Ed Yerha. “The comments tonight bear that out.”

The Town Council agreed transportation was a difficult component and said they would take the time to look into it before voting on the Cary Community Plan. But on the question of Chapel Hill Road, Mayor Harold Weinbrecht said the Council does not want six-lane roads and will look into that more closely. The plan now goes to the Planning and Zoning Board for their review.

While Town Council did not vote on the overall Cary Community Plan, they did vote on one part of the plan that had been fast-tracked: the Eastern Gateway. This large piece of Cary, stretching from Cary Towne Center to Chapel Hill Road, borders on the sides by highway I-40 and Maynard Road.

Among the plans for the Eastern Gateway is to make it a largely walkable space, with high intensity employment areas and plans to revitalize Cary Towne Center, with the town currently in talks with a new anchor to come in. The Eastern Gateway plan passed the Planning and Zoning Board unanimously.

Town Council liked the plan, with Councilmember Don Frantz saying at the beginning he was very skeptical but was now enthusiastic about the Eastern Gateway. He and other councilmembers wanted to add in some flexibility into language that put building heights in the 3-15 story range, which the presenters added in. During the earlier Public Speaks Out portion of the meeting, a representative for the developers also brought up concerns about heights for mixed use developments.

Yerha spoke briefly on two concerns he had, namely that commercial buildings in the upper thresholds of the height limit were likely not going to come in and also that spots for special destinations such as theaters and museums were not specified in the plan, although he said they could still potentially be a part of the plan. Town Council passed the Eastern Gateway plan unanimously.

Another discussion item that saw a large amount of discussion at the last Town Council meeting was the Mills Rezoning to put 40 townhomes or detached units next to Green Hope High School. When this was last before Town Council, they tabled it to allow the developers to come with more conditions to ease concerns about density and having a “sense of place.”

Before this went back before Town Council, representatives for the developer spoke at Public Speaks Out to say they did not have time to make their conditions formal but have a plan. Also, a local resident and parent at Green Hope High School spoke about concerns with traffic increases due to the proximity to the school, its density and what she described as insufficiently comprehensive planning. 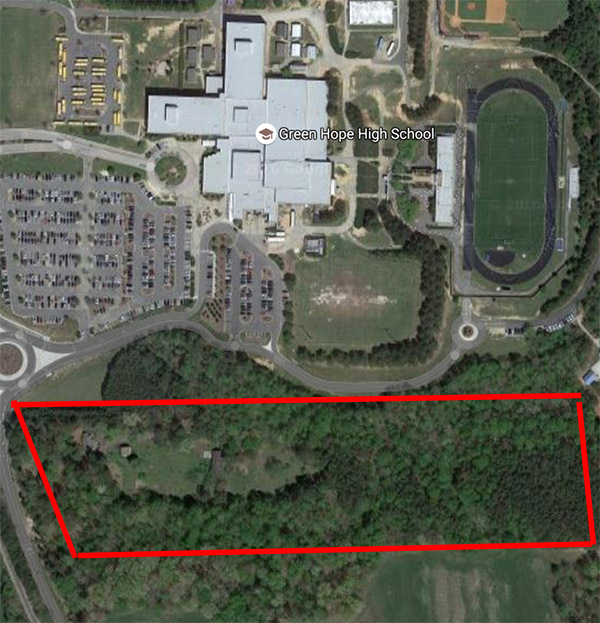 The approximate location of the proposed Mills rezoning

Because the conditions were not guaranteed because the applicants missed the deadline, Town Council voted to table the issue again until the next meeting but the conditions included a pedestrian connection and splitting the 40 units into no less than nine separate buildings.

Other discussion items included rezoning space by the intersection of Southeast Maynard Road and East Chatham Street for residential space, accepting a $1,004,000 in federal grant money for a bus facility and a partnership with the NC Department of Transportation to extend the left turn lane on Davis Drive’s intersection with Waldo Rood Boulevard. All of these items passed unanimously.

Other public hearings included renewing the lease for Cofounds Capital, which has a Cofounders Lab in the Cary Theater building to work with entrepreneurs to develop their businesses. Frantz said he was unsure about the lab when they started their lease last year but said they had exceeded expectations and were doing well. Town Council renewed their lease unanimously.

Town Council heard one amendment request for property zoned as residential. It currently has an age-resitrcition but the developer wants that lifted and said they hope it leads to a more diverse area.

Councilmember-At-Large Lori Bush said that spot was given an age restriction because of concerns dealing with the number of schools but said those concerns have mostly been alleviated.

Also on the agenda were two public hearings about annexations on Indian Wells Road and rezoning on a 1.54-acre parcel on Penny Road. Neither saw any discussion.

At the start of the Thursday, November 10, 2016 meeting, Weinbrecht and last year’s Hometown Spirit Award winner Anne Kratzer announced the winner of this year’s award. The award went to Sheila Ogle, a longtime businesswoman and philanthropist in Cary.

The other two nominees for the 2016 award were Debbie Dillon and Sarah Martin. 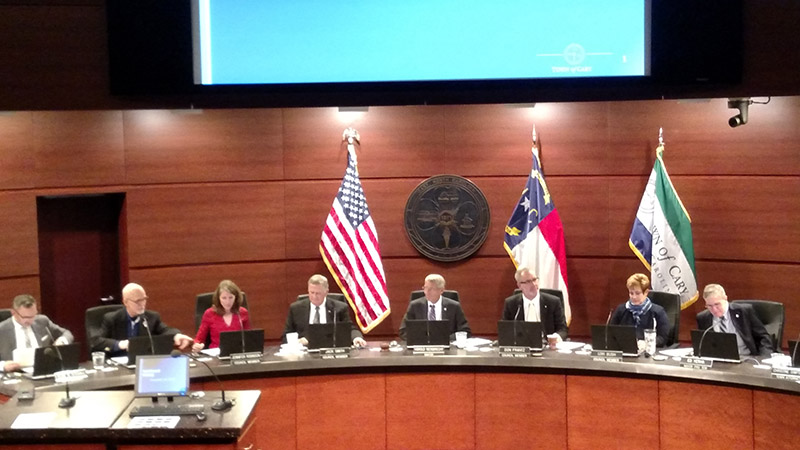