Cary, NC – The Carolina Hurricanes not only beat the current best team in the Western Conference, the Chicago Blackhawks, they did so in a come from behind 3-2 win and extended their impressive home streak to 11 games without a regulation loss with a 10-0-1 mark.

Lindholm and Stempniak Both Score For Second Straight Game

The PNC Arena was nearly as full as the sellout crowd for the Home Opener with the Hawks fans out in full force and full dress. Chicago has some of the most passionate fans in the NHL, or any sport for that matter, with many in their Blackhawk sweaters and one donning a full Indian chief headdress.

Both teams came out playing a fast and very purposeful game. The Canes played an excellent game two nights earlier in Pittsburgh only to once again squander a third period lead and lose 3-2 in regulation. Chicago wanted to keep their three game win streak going as well as stay atop the west as Minnesota is on a hot streak at 12 games and just a point behind the Blackhawks.

Both Cam Ward and Scott Darling were sharp early on, and for the entire game for that matter, as each team had four excellent scoring chances in the first five minutes but both goalies made all the stops. Michael Kempny opened the scoring at the 6:36 mark with a little help from Jonathan Toews and the linesman. Both teams were on a change and Toews had time and space, which is a dangerous combination for any opposing team, then set up a silver platter dish to Kempney who was all alone as Lee Stempniak was knocked down by the linesman just as he jumped over the boards allowing Kempny a hard slap shot through traffic past Ward for his first NHL goal.

The Canes fought back and didn’t skip a beat as most of the play in the next four minutes was in the Hawks ends with excellent results. Jordan Staal made a power move down the right wing cutting in to the goal getting off a shot that Darling blocked with his six-foot-six-inch body. Elias Lindholm had two swipes at the puck knocking in the rebound to score for the second consecutive game.

Just over a minute later with the Canes still in the offensive end, Teuvo Teravainen took a shot from the left point area that Sebastian Aho tipped in flight. The puck went right to Stempniak who was charging the net and put in the pass for, like Lindy, his second goal in two games and the Caniacs enjoying every minute of it.

Second Period Is All Hard-Nose Hockey

The second period was all hard-nose hockey. From the opening faceoff, Chicago wanted to set the tone for a little western style hockey: nothing dirty about it, just trying to get under the Canes’ skin without getting a penalty. The Blackhawks are one of the most talented teams in the NHL and probably the smallest in the West and like the Canes, do not take, or let’s say get called for, many penalties.

Both teams only had one penalty in the game, and like all games, some questionable plays were let go and penalties called that may have been questionable. Jay McClement got called for interference after a scrum on the sideboards in front of the Canes bench but a closer look showed the Hawks player had both hands on McClement’s shoulders. Last year’s MVP, Patrick Kane got called for a legitimate high stick to Lindy’s mouth on what could have been a breakaway.  While it was accidental, if the Canes did score on the powerplay that could have been a real game changer as with Kane’s speed, there was a good chance he could have met Lindy stride for stride.

Biggest question was: could the Canes hold on the a third period lead which has been a major problem for them this season?

Just like the last game, they entered the third with a 2-1 lead and had to find a way to keep the lead. Aho carried the puck from the neutral zone into the Hawks end but got pinched between two defenders one being Kane. Kane stole the puck but made a beautiful centering pass to McClement all alone in the center slot area.

McClement didn’t hesitate one bit as he slammed home a shot with a purpose that was a beauty to watch. The goal goes unassisted but it was certainly set up by Aho drawing the two defenders. The Blackhawks scored three minutes later giving the good number of Hawks fans in the arena life. As the ref was about to drop the puck for the ensuing faceoff, the Caniacs countered the visitor’s fans with their patented loudness that sent a signal to the Canes they had their backs and support.

Chicago was non-stop on the pressure and Cam Ward was unbeatable as he was making class-A saves. Twice earlier in the game, the Hawks had 2-on-1 breakaways and both times Ward came up strong. Great game that had everything and entirely entertaining: scoring, great defense, crowd involvement, and also was part of the Home Grown Series – local beer, food, art and music, and most of all a win for the home team.

Next game: Tuesday, January 3, 2017 against the New Jersey Devils.  Be There! 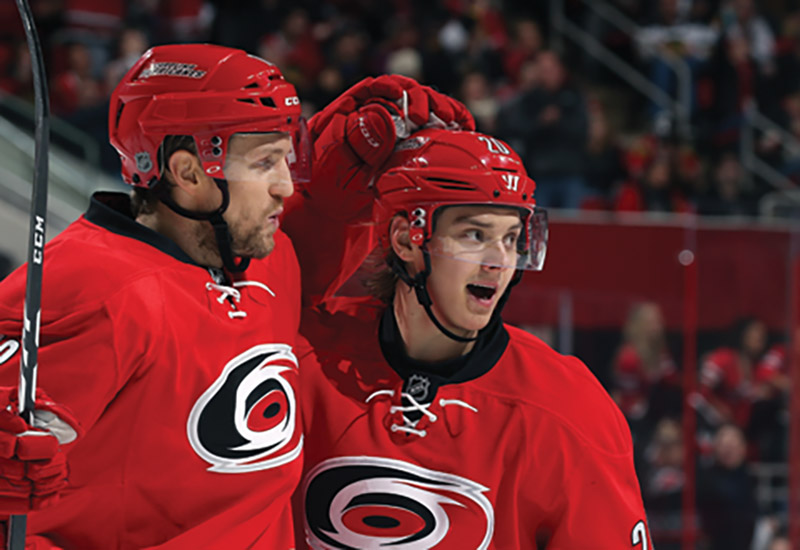