Cary, NC – Nearly 12,000 brave souls trekked out to the PNC Arena on Sunday to watch the Canes and Bruins make it three for three in games going into overtime this season with the home team winning each time. The youngsters of Teuvo Teravainen and Sebastian Aho worked their magic to secure the desperately needed two points for the Canes in the overtime. 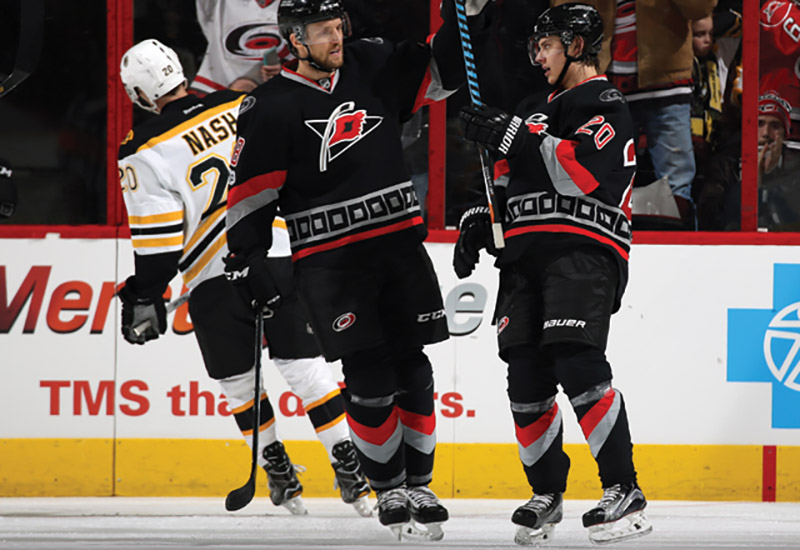 Both teams started the game fast with end to end action happening on every shift. It was interesting watching the refs and linesmen keeping up and by the first TV timeout, no one need a break more than they did.

With the Canes had the first power play of the night, Jeff Skinner made a quick pass to Victor Rask on the side of the goal. Rask got off two quick shots with rookie netminder Zane McIntyre making two great saves. Later in the period as the Bruins dumped the puck in with former Cane Riley Nash driving hard, Cam Ward made a rare miscue and didn’t send the puck hard enough to Noah Hanifin.

Nash got to the puck sending it to Dominic Moore who quickly passed over to Tim Schaller. Schaller did a pirouette and slid a backhander in for the 1-0 Boston lead.

Early in the second, Aho had an excellent chance on a semi breakaway but McIntyre once again made the stop. The Canes kept the pressure on with the forechecking in the offensive zone paying off. Jaccob Slavin passed the puck over to Lee Stempniak at the left point position.

Stempniak shot the puck towards the goal while Aho was squirming his way into the front of the crease. Aho got in position and just as he was crosschecked from behind into McIntyre, the puck hit the blade of his stick, popped in the air over McIntyre bouncing off his right shoulder into the net to tie the game.

Later in the period, Jordan Staal and Derek Ryan had a two-on-one with Staal controlling the puck. Staal was about 20 feet out when he faced the goalie as if he was going to shoot then laid a nice saucer pass to Ryan who buried the puck off the pad into the net for a Cane 2-1 lead. A few minutes later with the Canes on a penalty kill, Staal could have made the game less interesting for the Bruin fans as he had not one but 2 breakaways however McIntyre stopped both.

Aho Nets Second Goal Of the Night In OT

The Canes have had a hard time securing a win with a lead entering the third all season but this was home ice and the Canes knowing they needed a win, were pulling all stops to make the “W” possible in regulation.

Early in the period, Kevin Miller took a shot from the left point into traffic. Justin Faulk was tying up David Backes in front of Ward, Ward was able to make the pad save but did send out a sweet rebound. Backes turned right, Faulk turned left but the puck was on the right for an easy knock in to tie the game.

A couple of minutes later, the Canes were digging hard in the Bruins end. Viktor Stalberg had the puck behind feeding a nice dish to Jay McClement who was crashing the net. J-Mac got good wood on the puck stuffing it in short side to put the Canes back up by one.

The lead was very short lived and the perennial itch, Brad Marchand, tied it back up just 13 seconds later with the game ending in the 3-3 tie. So for the third and final meeting this season, the game went into overtime.

The Canes started with Staal, Ron Hainsey and Justin Faulk, so if anything, coach Bill Peters wanted to make sure he had a defensive group start the game. The next line had youth and speed with Teravainen and Aho first making the line change with Brett Pesce late on the ice. Just as the Bruins were trying to clear their zone, Teravainen stole the puck along the half boards.

Aho went to the high slot begging for the puck, Teravainen passed to Aho who waited ever so patiently for former Cane John-Michael Liles to set a screen then let a wicked wrist shot that went just inside the post stick side to start another home point streak with the 4-3 win.

Next game is Tuesday, January 10, 2017 against the surprise team of the year, Columbus. Be There! 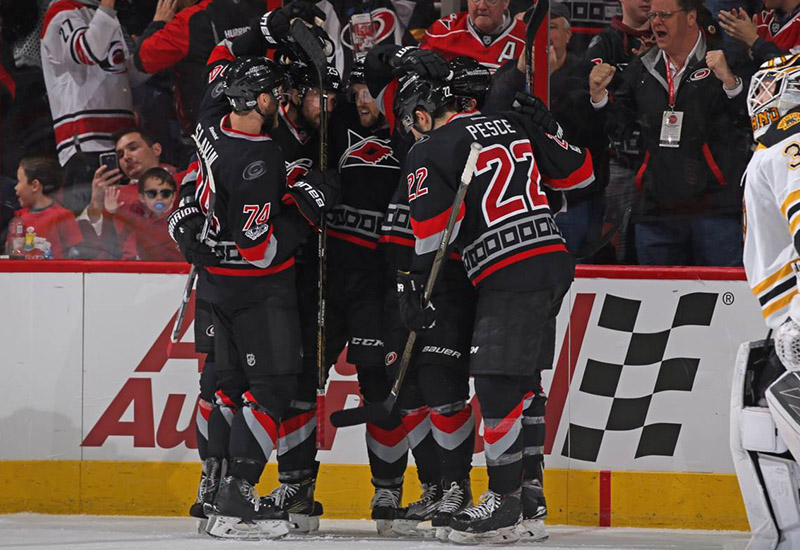