Cary, NC – This was the first full week of the year. With the exception of Monday, this was a busy week.

Monday was a holiday for most people but some of us had to work. I didn’t mind since there was light traffic on the roads and at work.

Tuesday started with calls to council members to hear of their concerns and questions about Thursday’s regularly scheduled council meeting. I was only able to reach three members and there were no big concerns. Later in the day I met with management, public information, legal, and administration to go over the agenda items. Based on our discussion I believed that Thursday’s meeting would last about an hour and a half.

Tuesday evening I, along with Mayor Pro-Tem Yerha met with the town manager and others to go over various issues. Some of the items discussed were quasi-judicial hearings, downtown businesses, and council staff relationships. Our meeting lasted about an hour.

Tuesday night the council held a quasi-judicial hearing for one item. Before addressing the item I had the honor and privilege of swearing in former Cary Mayor Pro-Tem Gale Adcock to her second term as a North Carolina House Representative. Gale is loved by many in Cary and does a fantastic job representing us. 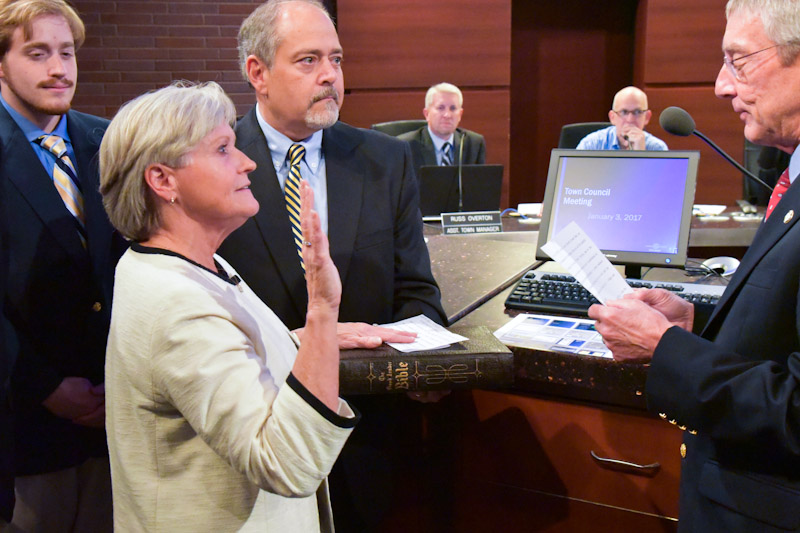 In the quasi-judicial meeting the council accepted a payment-in-lieu for bike lanes that was required of a development located at Highway 55 and Turner Creek Road. Council believed this was the safest thing to do since there are currently no bike lanes on Highway 55. In addition, council discussed sidewalks in the area and right-of-way for future road expansion. The vote to approve the request was unanimous.

The last meeting Tuesday was the work session on the Cary Community Plan called Imagine Cary. The council mostly focused on transportation recommendations. The following were approved by council to be included in the final draft to be voted on at the January 24th council meeting:

The work session concluded after an hour and a half.

Wednesday I attended the Economic Forecast presented by Economics Professor Michael Walden from NC State. The majority of his comments were about impacts of the President-elect on the economy. Other interesting comments included:

His presentation lasted about forty-five minutes. 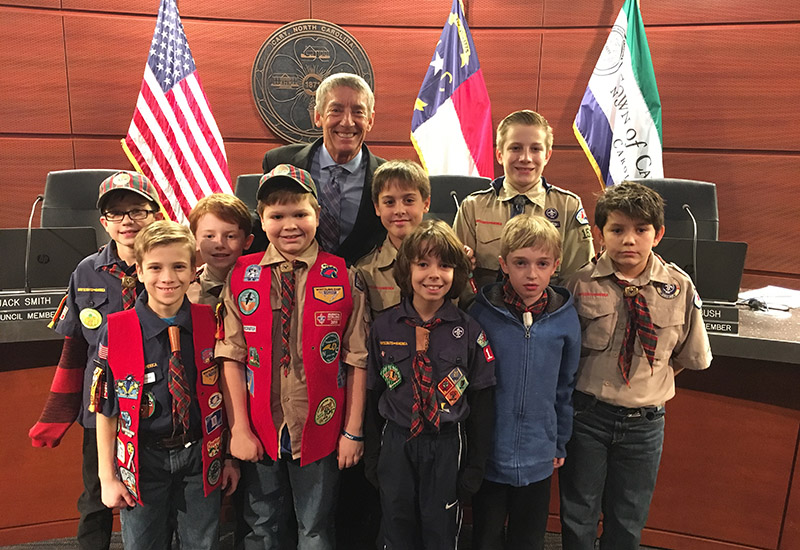 Thursday before the council meeting I met with Webelos troop 152 from Genesis United Methodist Church. I talked about my duties as mayor and then answered a few questions. Then I told them what to expect in the council meeting later that evening. I am glad to see young people involved in their government.

Thursday night was the council’s first regularly scheduled meeting of the year. There were 13 consent agenda items, 3 public hearings, 8 discussion items, and a closed session.

In the public speaks out portion of the meeting several speakers spoke about Chapel Hill Road being widened to 6 lanes. As is sometimes the case, they were misinformed. The Cary Community Plan, which will be voted on at the January 24th meeting, has the ultimate width as 6 lanes. However it is just a plan and councils can and often do change plans. So that road width could change in the future to 4 lanes or 8 lanes depending on the wishes of the council at the time. In addition, there is currently no funding planned for this road. So unless NCDOT changes their priorities this is not likely to be widened for at least 10 years. Who knows it may never be widened to 6 lanes.

Council also discussed a Walnut Street rezoning proposal after the public hearing. This proposal has a fast food at the corner of Tryon Road and Walnut Street adjacent to the Macedonia Methodist Church. The proposal has challenges with egress and ingress. It will be interesting to see the recommendation from the Planning and Zoning board.

Paid parental leave for town employees allowing up to 6 weeks was approved with council and staff stating that this will allow Cary to recruit and retain the best talent in our quest to remain competitive and create the best staff in the country.

The Legislative agenda was also approved with 5 items. Those items were:

The legislative items will be presented to the Cary delegation later this month.

Friday I had the joy of introducing the 10 finalist for the Davis Drive Middle School national geography bee contest. The National Geographic Bee is an annual geography contest sponsored by the National Geographic Society. The bee has been held every year since 1989 for students in the fourth through eighth grades. This was the 20th anniversary of Davis Drive’s first geography bee. After I introduced the contestants, Davis Drive’s first principal, Dr. Coley, was introduced as the emcee. He was also the principal at Cary High for many years. Although I was only able to watch one round of questions, I am grateful that Davis Drive included me in this milestone contest. 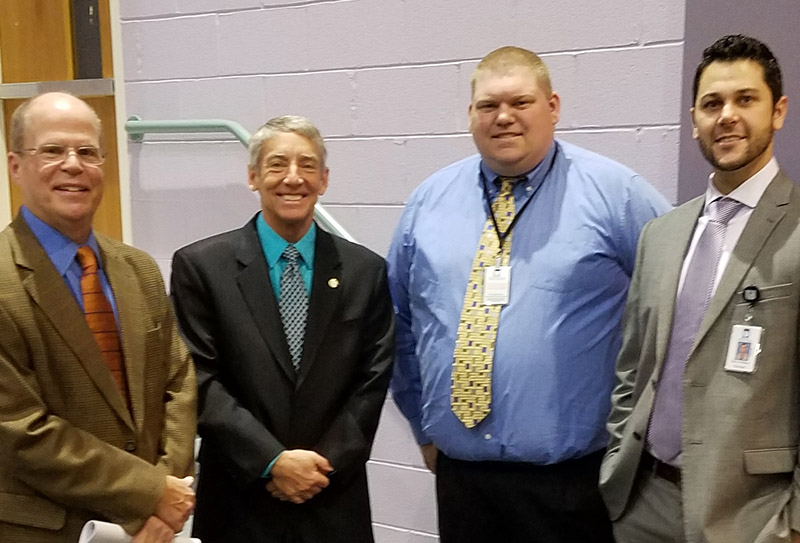 Starting on Saturday Cary was dealing with about half an inch of sleet and about an inch of snow. This combined with low temperatures, which remained below freezing for several days, made it very hazardous to drive. As usual, the Cary snow team was in high gear trying to clear the main roads on Saturday and Sunday.

Emails from staff this week included a response to a citizen about road maintenance. Here is an excerpt which I thought I would share:

The Town of Cary is committed to doing what is necessary to efficiently maintain our infrastructure and works to be cost effective by rehabilitating and resurfacing our streets during the early stages of cracking and deterioration.  There are approximately 466 miles of town maintained roadway within the town’s limits that are surveyed each year.

A private consultant is employed to perform the pavement condition survey work.  They conduct a visual survey of the streets maintained by the Town following the methodology and approach in the latest NCDOT Pavement Condition Survey (PCS) Manual as developed by the Institute for Transportation Research and Education (ITRE).  The information gathered includes physical characteristics and pavement distress types. The information collected is used to calculate the Pavement Condition Rating (PCR) for each street segment.  Overall, the Town of Cary maintained street system is in “Good” condition with an overall weighted average PCR value of 82.7 out of 100, with a distribution of condition as shown in the figure below.

This data is then used to determine which Town of Cary maintained streets are eligible for resurfacing.  Also, we use this information to determine the best places to employee preventative maintenance techniques such as crack sealing, patching, and rejuvenator.  Rejuvenator is a penetrating sealer that simply replaces the vital ingredients that have been lost from the asphalt over time due to exposure to the suns UV rays and wet weather.  This application can extend the life expectancy of roads. Extending the life of the roadway helps reduce future costs and tax dollars needed for paving.

I hope that you have found this information regarding Town of Cary streets helpful.  In regards to any roads maintained by the NCDOT, I would suggest contacting the local district office at 919-733-3213.  Thank you again for helping make the Town of Cary a great place to live, work, and raise a family.…”

As reported at last night’s Council meeting, brining operations are complete and trucks are switched over to plows and spreaders in anticipation of the winter precipitation likely to begin this evening. In addition to the efforts at Public Works, other actions include:

All parks, recreation and cultural arts programming after 5 p.m. tonight and continuing through the end of day Sunday are canceled; all facilities are closed through Sunday. The Three Kings Parade is rescheduled for Saturday, January 28. In addition, the Chinese Lantern Festival is closed and is expected to reopen Tuesday, January 10. GoCary will cease operations at 9 p.m. and end all door-to-door pick-ups at 7 p.m. All GoCary services are canceled for tomorrow. The Citizen’s Convenience Center will be closed tomorrow.

We will provide information to Council throughout the event. Stay safe and warm inside!

Because of your action in December, last week staff received $10,000 from Duke Energy for the installation of one dual-port electric vehicle charging station at Bond Park. Installation is estimated for spring 2017. This charging station is in addition to our existing stations.

We’ve been given notice that North Carolina FC (formerly the RailHawks) will hold a news conference on Monday at WakeMed Soccer Park to announce the addition of a National Women’s Soccer League team. The team’s permanent home will be WakeMed Soccer Park.

Lots of great work, through the efforts of many, occurred this week. In particular, I’d like to recognize the team that worked on the Paid Parental staff report: Renee Poole, Laura Turk, Danielle Mahoney, Hunter Frank, Allison Hutchins and Carrie Roman.

Also, I’d like to recognize the Imagine Cary/Transportation team for their efforts leading up to and at the Work Session on Tuesday. This includes: Jerry Jensen, Juliet Andes, Jeff Ulma, Tyler Bray and Russ Overton.

My schedule for next week will be surprisingly light which is extremely unusual for this time of year. I will use that free time preparing the State of Cary address. My only scheduled meetings are with the town manager and a tour of the CiVentiChem facility.

Well, that is all for this week. My next post will be on Sunday, January 15th.  Although I have Facebook and Twitter accounts those are not the best means of communications with me. Please send all Town of Cary questions or comments to Harold.Weinbrecht@townofcary.org and email personal comments to augustanat@mindspring.com.